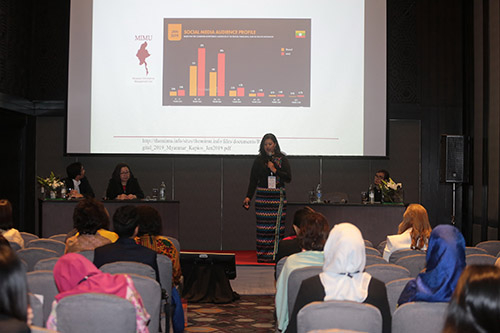 Women are generally being left behind by one modern global phenomenon that many people would just as soon avoid – the collection and analysis of Big Data.

But it’s increasingly accepted that Big Data is not only beneficial but also essential in determining both state policy governing all our lives and in helping corporations fine-tune their strategies.

But as speakers noted at a recent seminar in Bangkok, “Utilisation of Women Information in Big Data” organised by ASEAN Women Entrepreneurs Network (AWEN), women’s roles in providing and evaluating the data are limited – to their collective disadvantage.

Boey explained that “sex-disaggregated” data allow for the measurement of differences between women and men in various social and economic dimensions and were key to obtaining accurate gender statistics.

“Gender statistics rely on these data to reflect the realities of the lives of women and men and policy issues relating to gender,” she said. “This is a way to promote women’s economic power as the world transitions towards a digital economy. It starts with collecting sex-disaggregated data to differentiate the needs of female and male entrepreneurs.” Khin Khin acknowledged that, among Southeast Asian nations, Myanmar was the “newcomer” to the world of technology.

“We are the last to open up,” she said. “Internet use, social media advertising and the Facebook audience all continue to growth, but women are so far not included in the digital economy. The challenge is how Myanmar can develop its digital economy and utilise women’s information in the form of Big Data.” “Big Data can be analysed for insights that lead to better decisions and strategic business moves. This is data in volumes too great to process by traditional methods, but Big Data is the new oil.”

Gwynpong noted that data can be analysed “descriptively” or “predictively”.

In one example of the former he cited, AIS research conducted via its Customer App found that 39 per cent of women enjoy playing games online, 36 per cent do their banking on the internet and 27 per cent shop online – and all these figures topped those of men by 1-5 per cent.

Predictive analytics, meanwhile, turned up the fact that 91 per cent of consumers are more likely to purchase brands they recognise, remember and trust to make them relevant offers.

The speakers agreed that more female talent is needed in the field of data analysis if “the right solutions” for women are to be identified. “In the US, only 25 per cent of STEM roles [science, technology, engineering and mathematics) are filled by women,” Gwynpong said. “AIS currently has 10 data scientist and all of them are men.

“By 2020 the number of positions for data and analytics talent in the US will increase by 364,000 openings, to 2,720,000. But today, 85 per cent of data scientists and 74 per cent of predictive analytics professionals are male, according to the executive-recruiting firm Burth Works.”

Coronel pointed out the “significant” economic force represented by women entrepreneurs in Southeast Asia. An estimated 61.3 million own and operate businesses in the region’s 10 countries, accounting for 9.8 per cent of the total population.

She cited research predicting that if the “credit gap” for women-owned small and medium-sized enterprises could be closed by 2020, average per capita income might rise 12 per cent by 2030 across the region.

“Lower education levels can influence factors such as the size of the business, due to lack of growth orientation, products and services innovation, and access to finance due to lack of information,” Coronel added.

“Women’s business skills are also negatively affected by the tendency to study subjects in school that are linked to traditional ideas. Women’s time and mobility constraints limit their ability to grow their businesses. Women in Asia handle over 70 per cent of the total domestic and care work. By addressing these gender gaps, we can achieve significant improvement to GDP and welfare.”