In “Origins”, the latest novel by popular American novelist Dan Brown featuring Robert Langdon, a professor of religious symbology, two main questions are posed: "Where did we come from?" and "Where are we going?" They, as well as the setting, have inspired thousands of readers, myself included, to visit Spain, and more specifically Barcelona, home to many of the architectural works of Antoni Gaudi, among them his most famous, the church of the Sagrada Família.

My first visit after checking into my hotel is Casa Mila in Passeig de Gracia. Built between 1906 and 1912 as a residence for a very wealthy family, Casa Mila is a testament to Gaudi’s modernist architecture and was recognised by Unesco as a World Heritage in 1984.

Referred to as “La Pedrera”, which translates as the stone quarry, it stands out amongst other buildings in the area for its façade of undulating stone that, along with its forged iron balconies, explores the irregularities of the natural world. 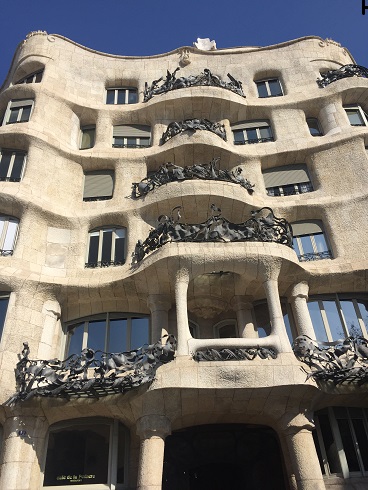 From the outside it looks a little like a mountain. Enter the doors and you could easily be in a cave or forest. And while the entire building is worthy of admiration, one of its most iconic spaces is its spectacular roof terrace.

The next day, I head to Parc Guell in Carretera del Carmel, about 90 minutes from downtown Barcelona and a pleasant ride by both car and bus. Another Unesco World Heritage site and located on Carmel Hill, it is designed as a garden complex and houses a series of dynamically designed buildings including Gaudi’s own home. It was built between 1900 and 1914 for one of Gaudi’s biggest clients, Eusebi Guell I Bacigalupi, the count of Guell. 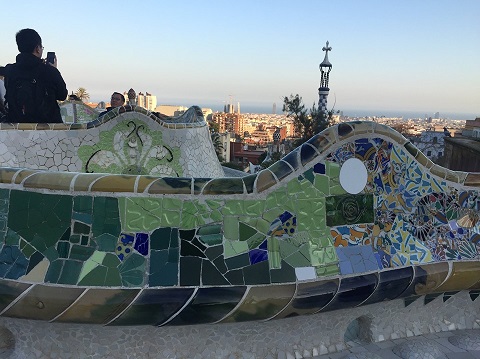 Spread over 42 acres, Gaudi’s landscape was greatly inspired by organic shapes. Most buildings boast “trencadis” (surfaces covered with irregular ceramic pieces) that are characteristic of Gaudí and Art Nouveau.

Shaped like a dragon, the long terrace is the best vantage point over Barcelona and covered in colorful mosaics. The museum, Casa del Guarda or the Caretaker’s House, hosts a permanent exhibition on Gaudí and Barcelona.

But the highlight of my trip was my visit to La Sagrada Familia on Carrer Mallorca. This is the most famous of Gaudí’s works – his masterpiece. Most tourists and residents refer to La Sagrada Familia as the ‘under construction’ church – and indeed Gaudi commenced construction of it back in 1892. It’s not expected to be finished until 2026 — to commemorate the centenary of Gaudí’s death. 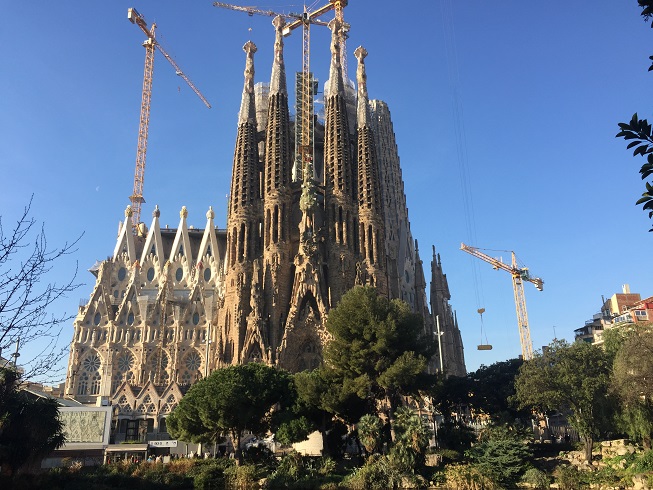 The church was in fact started by architect Francisco de Paula del Villar in 1882. He resigned in 1883 giving Gaudí the opportunity to take over as chief architect. He immediately transformed the project from a typical cathedral to the masterpiece the world knows today, combining Gothic principles with curvilinear Art Nouveau forms and his own geometric style.

Designed with nature in mind, coloured mirrors around the church represent earth, sky, ocean, and forest.

The church’s pillars are inspired by trees and the overall effect is one of being in a forest. Experts describe it as an excellent depiction of the relationship between man, nature, and religion and it’s easy to see why. It’s also imposingly tall, measuring 170 metres, just one metre less than the peak of the city’s Montjuic hill.

Gaudí devoted the remainder of his life to the project. At the time of his death, less than a quarter of the project was complete. Gaudí died at age 73 in 1926 after being run down by a tram. He is buried in Sagrada Familia’s crypt.

After Gaudí’s death, construction progressed slowly and was halted several times by events like the Spanish Civil War and revolutionaries partially destroying Gaudí’s original plans, among others.

While construction is now going at a faster pace, 10 more spires are still to be completed, each symbolizing an important Biblical figure in the New Testament.

Gaudí believed that his creation should not surpass God’s creation.

Sagrada Familia is the venue for one of the most important scenes in “Origin” – the staircase scuffle, which sees Landon fighting one of people who wants to kill him.

As yet, there are no indications that “Origin” will be turned into a movie and even it if were, it’s doubtful that the staircase shuffle could be filmed inside the cathedral.

For that reason, I would advise anyone, whether or not they love the book, to take time out and spend time getting up close and cosy with Gaudi’s architecture and the hospitable city of Barcelona.

Several airlines offer flights from Bangkok to Barcelona. Journey time is about 11 hours.

To visit Parc Güell, either take a tour (most hotels will arrange these) or board a city bus. Numbers 24, 31, 32, H6 92 run from Placa Catalunya to Parc Guell. It takes 90 minutes to two hours.