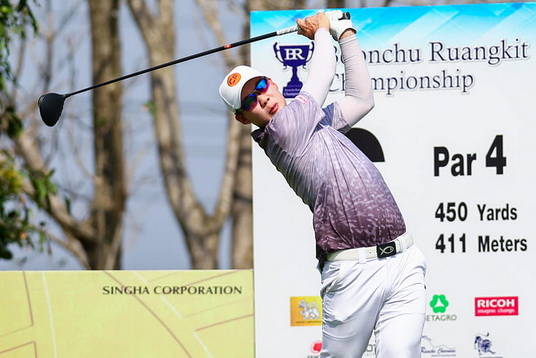 Asian golf stars Jazz Janewattananond, CT Pan and Haotong Li will be in the spotlight at The Open Championship starting on July 18 and next week’s World Golf Championships-FedEx St Jude Invitational as they look to lock in their Presidents Cup debuts.

Only five weeks remain before the eight-strong International and United States teams are picked for the 2019 Presidents Cup, to be played in Melbourne, Australia from December 9-15.

The trio will therefore be gunning for personal glory as well as Official World Golf Ranking points over the next two weeks.

The 23-year-old Jazz, the top earner on both the Asian and Japan Tours, is currently eighth on the International Team standings, thanks largely to wins his year in Singapore and South Korea.

Ranked 53rd in the world, a strong showing at The Open at Royal Portrush will enhance his Presidents Cup hopes as well as help him break into the world’s top 50. This would also ensure his qualification for next week’s prestigious event in Memphis.

It will truly be music to Jazz’s ears if he squeezes into Memphis, an historic city famous for its rich music legacy of blues, soul and rock n’ roll.

“It's a great opportunity to be here at The Open,” said Jazz. “Playing in a major offers plenty of World Ranking points and hopefully I'll perform well to get into the top 50 and into the WGC-FedEx St Jude as well.

“These are basically the two tournaments I have to try to keep my position in the top 8 of the International Team standings before the qualifying deadline [in mid-August].”

Jazz has already shown himself to be a man for the majors, having made a name for himself with an outstanding T14 finish at the PGA Championship in May.

China’s Li will be featuringin his third successive Open, with a magical third-placed finish at Royal Birkdale in 2017 still fresh in his memory. Currently fifth on the International Team’s standings, the talented Chinese is tipped to challenge at Royal Portrush following a steady 2019 campaign comprising of three top 10s and three top 20s around the world.

He says his incentive to make the team in Melbourne is earning a place in the history books. “Yeah, for sure, I want to be there,” he said of his Presidents Cup aspirations.

“I just need to keep playing well. Last time I nearly made the team and no Chinese has ever played in the event, so I want to be the first. I think it would be great for Chinese golf and for my country.”

A two-time winner on the European Tour, Li is also chasing his PGA Tour membership via the non-member FedExCup points list, where he is only 16 points shy of earning Special Temporary Membership. As he is already in the elite field for the WGC-FedEx St Jude Invitational, a fortnight of good results could see Li achieving his American dream.

International Team Captain Ernie Els has been keeping a close eye on Li, whom he played alongside when the young Chinese produced a final round 63 at Royal Birkdale. “He's a confident young man. He’s the new breed of Chinese power golfers and has a great attitude. Li can be a great addition to my team,” said Els.

Pan, winner of the RBC Heritage in South Carolina in April, is on course to become the first golfer from Chinese Taipei to play in the Presidents Cup - he is currently sixth on the standings.

The 27-year-old can strengthen his position over the next month and he virtually assured of his place in the first two FedExCup Playoffs events, The Northern Trust in New York City and the BMW Championship in Illinois.

“I want to make history by being the first one,” said Pan, who on Tuesday played a practice round with Li in what could prove to be a formidable partnership at the Royal Melbourne Golf Club.

“The Ryder Cup sparks great enthusiasm among the fans and that’s something I want to do for golf fans in Chinese Taipei. Our fans don’t have a team to root for … I want to make this the team for the fans.”

The top 15 players in the International and U.S. Presidents Cup Team Standings as of July 15, 2019 are listed below.