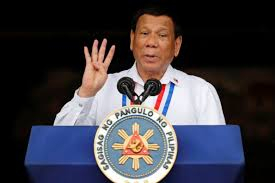 MANILA, Philippines — President Rodrigo Duterte on Wednesday declared that he would never be tried by an international tribunal for the thousands of killings in his brutal war on drugs, saying he would only face trial in a Philippine court.

“I will not answer a Caucasian asking questions, or [any] white man there. You must be stupid. Who are you? I am a Filipino, we have our courts here. Why would you have to bring me somewhere else? I would not like that,” the President said in a television interview with a celebrity pastor.

“Look, as I have told you before, ladies and gentlemen of the world, including all the governments there, I will only be tried or face a trial in a Philippine court presided [over] by a Filipino judge, prosecuted by a Filipino,” he said.

“And maybe they can reimpose [the] death penalty then [I can] die in Filipino hands,” he added.

His critics, however, say that with an approval rating of about 80 percent, a supermajority in Congress and presidential appointees heading courts, commissions and investigative bodies, there is little chance of the President being impeached or prosecuted at home.

The President’s latest show of defiance came days after the UN Human Rights Council adopted Iceland’s resolution that sought an international probe into the human rights situation in the Philippines, specifically the thousands of killings in his war on drugs.