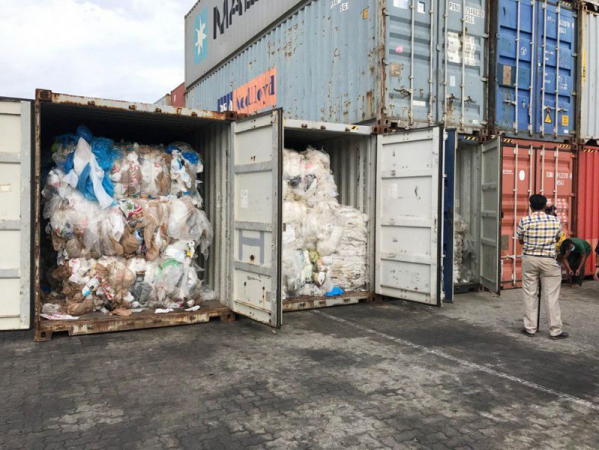 The plastic waste found in 83 containers at the Sihanoukville Autonomous Port on Tuesday came from the US and Canada, the Ministry of Environment said. The huge shipment of rubbish weighed some 1,600 tonnes.

Officials are continuing their investigation to find the company or individuals responsible for bringing the containers into Cambodia, ministry spokesman Neth Pheaktra told The Post on Wednesday.

He said legal action will be taken when they are found. “The plastic waste was illegally imported into Cambodia with the use of inaccurate documents saying the containers held ‘recyclable products’ rather than ‘waste’."

“The government will continue to take the strictest action against the import of illegal goods. The government in no way allows such plastic waste into Cambodia. Cambodia is not a rubbish tip."

“Authorities have been preparing the procedures to determine when it will be sent back to its countries of origin. The importing company will be fined in accordance with the law,” Pheaktra said.

On Tuesday afternoon, the ministry, the General Department of Customs and Excise and other relevant institutions broke open the 83 containers at the port for inspection which revealed they contained only plastic waste.

Pheaktra said the crackdown showed good cooperation between the ministry and relevant institutions – including the Ministry of Economy and Finance’s General Department of Customs and Excise and the Sihanoukville Autonomous Port customs and excise branch – in preventing prohibited goods from being imported into the Kingdom.

Preah Sihanouk Provincial Hall spokesman Kheang Phearum declined to comment on the issue and referred questions to Yik You, the director of the port’s customs and excise branch. However, You could not be reached on Wednesday.

Kun Nhem, the director-general of the General Department of Customs and Excise, told reporters on Tuesday: “The number of containers at this international port has increased and we cannot inspect all the containers. On average more than 700 containers come through the port daily.

“Through our inspection system, we can only perform arbitrary inspections, certainly not comprehensive ones. We merely see the origin of the goods and what goods they are. If we find that the goods are on the list of prohibited ones, we seize them for further investigation and take action.”

Cheap Sotheary, the provincial coordinator for human rights group Adhoc, said this is the second such case in the province. In 1998, toxic waste made its way into the port from Taiwan and was disposed of in Prey Nop district’s Bit Traing commune.

Circulating rumours that the waste was radioactive caused mass panic among villagers, many of who fled, leaving the area quiet. However, Thai army experts inspected the waste and determined it was not radioactive.

Sotheary said that this time, relevant government officials must properly monitor and package the waste to be shipped back to its countries of origin and must impose a fine on those who shipped them in. Additionally, the officers who allowed it in must receive a warning or punishment.

“I don’t know how foreigners look at our laws or how they look at Cambodian officers, but the government must punish the importing company and those responsible for allowing the import of such goods.”

US Embassy spokesperson Emily Zeeberg told The Post on Wednesday that the embassy is monitoring reports of plastic waste at the Sihanoukville Autonomous Port.

“We have requested additional information and are offering US government assistance to determine both the exporter and the importing entity here in Cambodia,” she said.