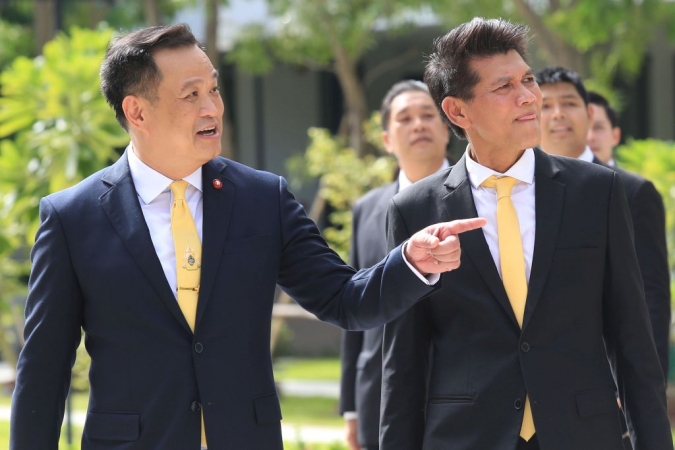 Public Health Ministry officials welcomed the new minister on Thursday, saying they will support his policy to promote medical marijuana and work towards getting the formula prescribed at public hospitals from early August.

Public Health Minister Anutin Charnvirakul started his first day at work from 8.30am, when he showed up at the ministry with his deputy, Sathit Pitutecha. He was received by the ministry’s permanent secretary Dr Sukhum Kanchanapimai, ministry executives and officials.

A group of marijuana supporters also showed up to congratulate him and urged him to push forward the legalisation of medical marijuana.

The new minister explained that he had many items on his agenda, including implementing public health projects under Royal patronage, urgently addressing issues related to the universal healthcare scheme and the recruiting of newly graduated doctors to boost the quality of tambon-level hospitals.

Anutin said his policy can be summed up in the motto “reducing expenses, increasing incomes and promoting strength”. As for marijuana, he said it should be made accessible for everybody soon, and “if it is well implemented, it can become a cash crop for farmers”.

Dr Sukhum, meanwhile, said he was ready to respond to Anutin’s policy of allowing the prescription of medical marijuana in public hospitals by early August for patients in need. He added that the Government Pharmaceutical Organisation (GPO) should be able to produce 10,000 bottles of cannabis extract and the Chaophraya Abhaiphubejhr Hospital 5,000 bottles by then. The Phra Acharn Fan Acharo Hospital, meanwhile, will produce five formulas of marijuana-based traditional medicines made from confiscated weeds. In the first phase from July to September, there should be at least one hospital per province that provides medical marijuana, more community hospitals gain permission to prescribe the concoctions in the second phase by April 2020, he added.

Meanwhile, Deputy Minister Sathit said he aimed to propel forward three measures, namely promoting exercise as a way of maintaining health and reducing medical expenses, which he and Anutin will lead by example; developing the healthcare system in order to avoid long queues at hospitals; and using technology to link patient information with all medical service units.