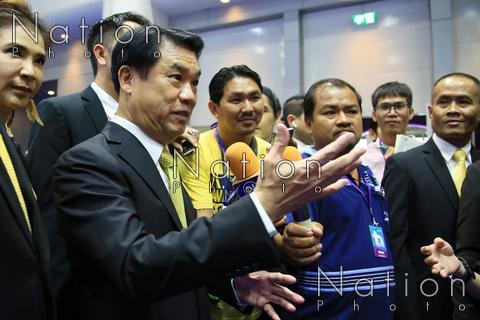 Industry Minister Suriya Juangroongruangkit wants to apply the model for the Eastern Economic Corridor (EEC) to the country’s Northeast in a bid to reduce income inequality.

Upon assuming the industry portfolio for the fourth time, Suriya said another pressing issue was to help operators of small and medium-sized enterprises, especially those who have paid off debts but remain on the Credit Bureau’s blacklist. This status prevents them from getting new loans.

He will schedule talks with the Small and Medium Enterprise Development Bank of Thailand (SME Bank) to formulate remedies, along with ensuring that more money is injected into SME operators via the Industry Ministry’s SME Fund.

“As for the Eastern Economic Corridor (EEC) project, we will continue according to the original plan,” he said. “However, a development campaign focused heavily on a certain area may cause economic disparity in the region. For example, workers in the EEC areas will have a higher per capita income than those in Bangkok. It is therefore advisable to extend the EEC’s development model to other regions of Thailand, especially those with high economic disparities, like the Northeast. I will bring this into discussions with Deputy PM Somkid Jatusripitak later to explore the possibilities.”

The Industry Ministry also plans more help for SMEs in the EEC areas, such as setting local content requirements to urge those behind mega-projects and investors to source materials and products from local manufacturers.

"I am positive that we will be able to restore the confidence of foreign investors especially in the EEC areas after the new government unveils tangible policies regarding industrial development and an economic boost. I have discussed matters with several Japanese entrepreneurs and they still see Thailand as Asean’s most promising investment destination,” Suriya said.