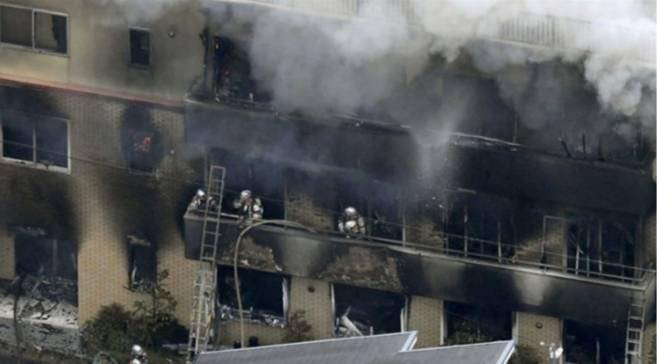 KYOTO — The death toll from an apparently deliberate fire at a studio of animation production company Kyoto Animation Co. in Kyoto has climbed to 33, while 35 people were injured and at least four among the injured were in critical condition as of Friday morning. The Kyoto prefectural police have started investigating it as a case of suspected murder and arson of an inhabited structure.

On Friday, the police announced that the 41-year-old man who allegedly set fire to the studio is Shinji Aoba.

When he was taken into police custody, he told the police a story to the effect that he has complained about the animation company stealing his idea for a novel, according to investigative sources.

The police believe that he had become increasingly resentful toward the company and plotted the arson incident, the sources said.

On Friday morning, the police and the Kyoto City Fire Department jointly conducted an on-site investigation at the three-story steel-frame concrete building in Fushimi Ward that is managed by Kyoto Animation, with the attendance of President Hideaki Hatta.

According to the National Police Agency, the number of casualties this time is the largest among murder cases since the start of the Heisei era (1989-2019).

The police said that 33 of the 74 employees and other people inside the building at the time of the fire died, and 35 were injured. Six people escaped unharmed from the blaze.

According to a police statement and other sources, the suspect suffered burns over his entire body and became unconscious after he was detained. He apparently was not a Kyoto Animation employee and had never worked for the company. He reportedly lives in Minuma Ward, Saitama.

The suspect entered the building’s first-floor entrance while screaming, “Die!” He then poured gasoline from what appeared to be a bucket and set it alight. About five minutes after the fire broke out, police officers found the suspect lying face up on a road about 100 meters south of the building. He told them he “started the fire with a lighter.”

An explosion was heard and the building went up in flames at about 10:35 a.m. on Thursday. The fire, which was mostly extinguished after about five hours, destroyed most of the about 700-square-meter building. It appears smoke and flames rapidly spread inside.

Several knives and a hammer were found near the studio in a rucksack and bag thought to belong to the suspect. Two 20-liter gasoline cans and a hand cart had also been left nearby. A man resembling the suspected arsonist purchased 40 liters of gasoline from a gas station about 500 meters west of the studio before the fire broke out. Police suspect the man used the cans and cart to carry the gasoline to the studio.

The building’s first story was used for offices, and the second and third stories were the animation production areas. Most of the 74 people inside the building were Kyoto Animation employees, and the rest were employees of another company.

According to President Hatta, a special card is usually required to access the building. However, this system was disarmed on Thursday morning because people from outside the company were attending a meeting there.

While some of the victims sustained severe injuries, others had no obvious external injuries but apparently died from carbon monoxide poisoning. The police will conduct legally required autopsies to determine the causes of the deaths.