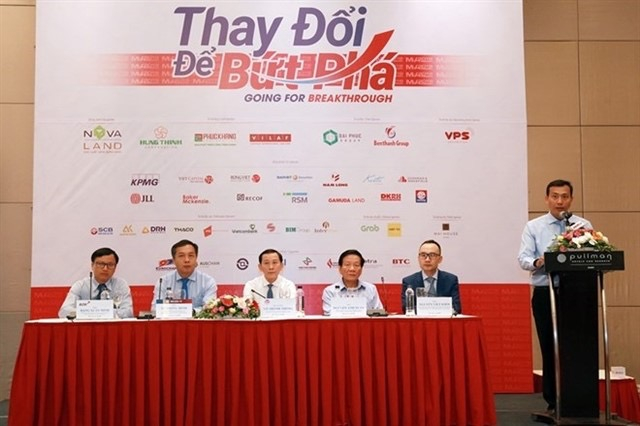 Speakers at the conference to introduce the Vietnam M&A Forum 2019 on Tuesday.Photo courtesy Vietnam Investment Review

The value of the merger and acquisition (M&A) deals in Vietnam reached US$5.43 billion (Bt167.9 billion) in the first seven months of this year, according to data released on Tuesday by the AVM Vietnam, a co-organiser of the Vietnam M&A Forum 2019.

The figure included the $885 million equity purchase of South Korean KEB HANA Bank for a 15 per cent stake by the Bank for Investment and Development of Vietnam (BIDV) announced on Monday.

Since 2018, Vietnam has emerged as a major M&A market in the Southeast Asian region with many big value deals. Total M&A value last year reached $7.64 billion, down 25 per cent compared to 2017’s record value of $10.2 billion. However, if the $5 billion deal from ThaiBev’s purchase of Sabeco’s equity in 2017 is excluded, the 2018’s M&A value still increased by 41.4 per cent year-on-year.

Dang Xuan Minh, general director of AVM Vietnam, said foreign investors were seeking opportunities in the consumer goods manufacturing and real estate industries in Vietnam to capitalise on the huge market of more than 96 million people.

“At a Bloomberg’s investment conference in Thailand recently, many foreign investors expressed their keen interest in Vietnam’s market and said they want to seek opportunities here,” Minh told the meeting to introduce the Vietnam M&A Forum 2019 on Tuesday.

Minh predicted the M&A value could reach $6.7 billion by year-end, but left open the possibility of higher value if big deals like KEB HANA Bank in BIDV were to be concluded.

“There’s no clear standard to value the company properly. You have to trust and take all risks in the deal,” he said.

After a decade of strong growth, Vietnam’s M&A market value reached nearly $50 billion and is predicted to enter a new era with various opportunities.

Thong said recent new policies such as the draft amendments and supplementations to some important laws (the Law on Investment, Law on Enterprises and Law on Securities), the draft resolution on attracting new-generation foreign investment and newly-signed free trade agreements would help lure more investment, including M&A deals.

He said the Politburo would for the first time issue a separate resolution on attracting foreign investment in the future.

The 11th annual Vietnam M&A Forum 2019 themed “Going for breakthrough” will take place in GEM Conference Centre in HCM City on August 6. The forum will assess the M&A trends in the next few years, analyse new capital flows, opportunities and driving forces for M&A in Vietnam, Minh said.