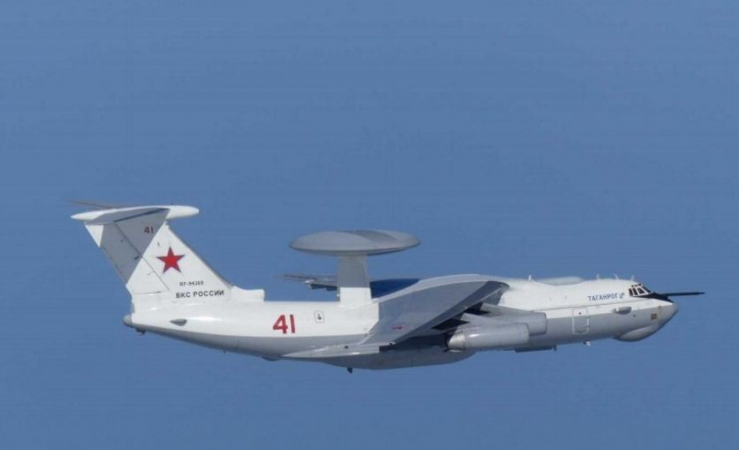 According to the Joint Chiefs of Staff, the Russian warplane, identified as an A-50 -- an airborne early warning and control aircraft -- entered South Korea’s territorial airspace, some 12 to 13 kilometers away from Dokdo, at 9:09 a.m.

South Korean F-15K fighter jets sent warnings, dropped some 10 flares, and fired 80 warning shots into the air close to the Russian aircraft. The Russian warplane left the area at 09:12 a.m. and exited the KADIZ at 9:15 a.m.

The A-50, however, again entered South Korean airspace at 9:33 a.m. for the second time, prompting Korean fighter jets to fire 280 warning shots and 10 flares. The warplane left the area at 9:37 a.m. and flew toward the Northern Limit Line, exiting the KADIZ at 9:56 a.m.

The JCS said it is the first time any foreign military aircraft has violated South Korea’s territorial skies, and also the first time the Air Force has fired warning shots.

The Russian aircraft is assumed to have been participating in a joint military exercise with China, as two other Russian warplanes were also found entering into the KADIZ along with two Chinese bombers.

“While more time is needed to clarify the purpose of these violations, it is the first time that warplanes from the two countries have entered the KADIZ at the same time,” the JCS said.

The Chinese H-6 bombers were first found entering the KADIZ at 6:44 a.m. before flying out to the Japanese air zone and then reentering the KADIZ. Flying around the KADIZ near Ulleungdo and Dokdo, they were joined by two Russian bombers identified as TU-95, which came down from the Northern Limit Line, the de facto maritime border with North Korea.

The Chinese aircrafts appear to have left the KADIZ at around 1:11 p.m., while the two Russian bombers reentered at 1:11 p.m. and finally left KADIZ at 1:38 p.m. The Russian A-50 left KADIZ earlier at 9:56 a.m., after it flew out of South Korea’s territorial skies.

The route of the Russian plane's incursion

South Korea’s Air Force deployed 18 fighter jets, including the F-15K and KF-16, which sent 20 warning signals to Chinese aircrafts and 17 warnings to Russia’s A-50 and TU-95s.

While the warplanes were flying above the South Korean waters, two Chinese warships were also found nearby -- some 80 nautical miles east of Pohang, and 30 nautical miles from Jeju Island, respectively.

Territorial sky differs from the air identification zone, as it is considered a country’s sovereign territory, under international law. Territorial airspace, as is the territorial sea, is set as 12 nautical miles or 22.2 kilometers out from the coastline of the land.

An ADIZ, on the other hand, is not defined by any law or treaty, but is declared by a state, so that it can detect foreign planes approaching its territorial airspace early to prevent infiltration and accidental clashes.