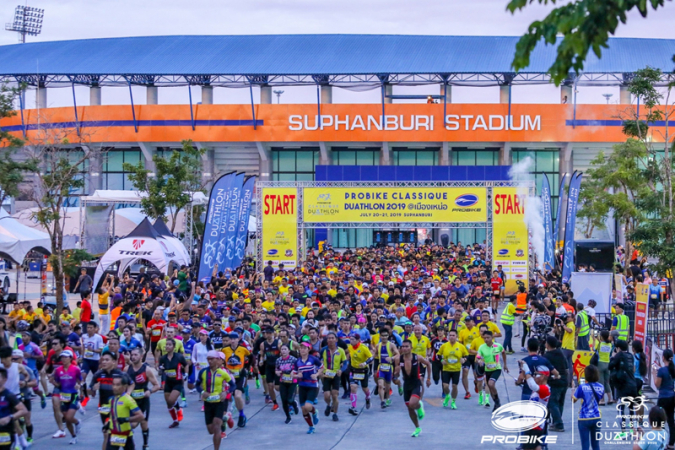 The athletes start the race.

Ivan Vlasenko, a 30-something Russian based in Bangkok, was crowned the winner of Male Open at Probike Classique Duathlon 2019 in Suphan Buri last Sunday for the second consecutive year and Sawangjit Sae-Ngow, known as Coach Sueng to her young charges in the Kids Triathlon Weekend Training Class, took home the top prize in the Female 30-39 category.

The second edition of the run-bike-run event, organised by Probike in cooperation with the Sports Association of Suphan Buri and Suphan Buri Football Club, had as its slogan “The Challenging Never Ends” and aimed to raise awareness of the importance of sports, exercising the right way and paying more attention to health so as to reduce the burden on public health services. A secondary objective was to bring more people to experience the culture of Suphan Buri Province and generate income for the community. 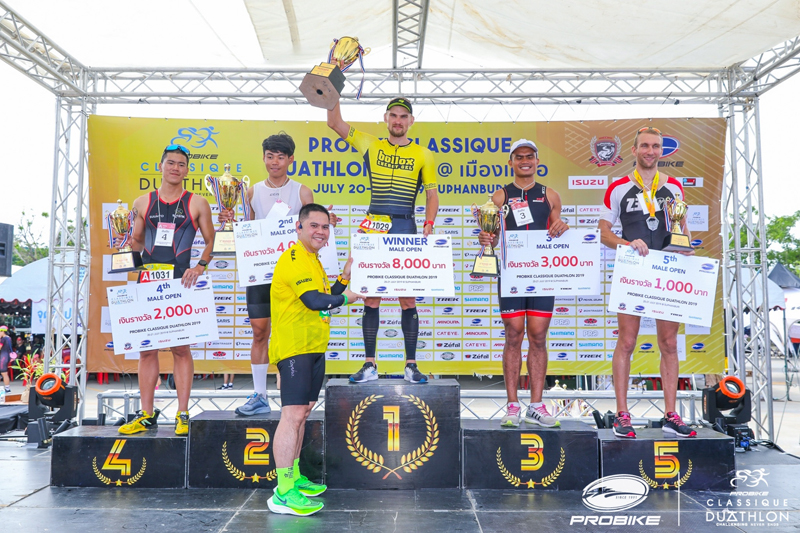 “This second event seems very busy,” mused Natural Resources and Environment Minister Varawut “Top” Silpa-archa, the only son of former Prime Minister Banharn Silpa-archa and chairman of Suphan Buri FC, during a brief interview with The Nation the day before the race. “For me, it wouldn't be better than last year. I can't seem to make time for a full workout now that I’m in government. Nevertheless, I will try my best. Usually, I run about 5 kilometres or one hour a day in this stadium. The activity is called ‘plogging’, and it all about picking up trash while jogging. I tie a trash bag around my waist, so my heartbeat will be faster.” 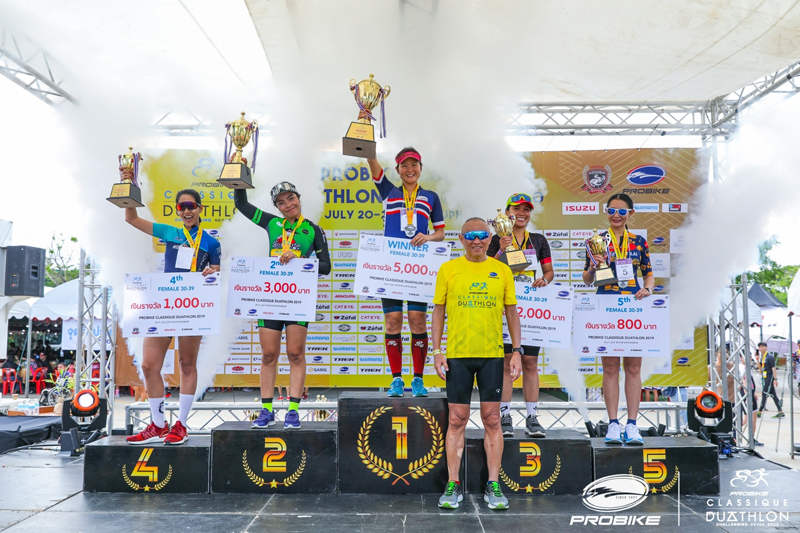 He is also delighted that his city was named by the Sports Authority of Thailand as one of the six sports cities of Thailand alongside Chon Buri, Buriram, Udon Thani, Si Sa Ket and Krabi. 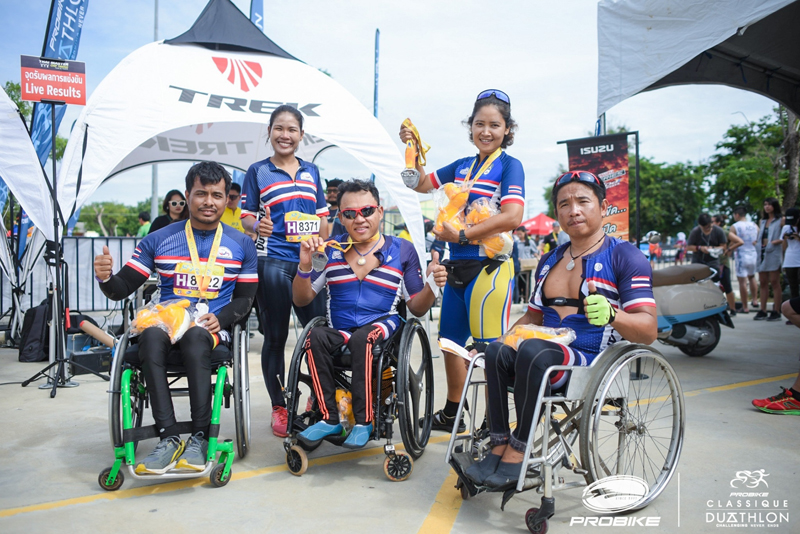 The Thailand Paracycling Team took part at this run-bike-run event for the first time.

“Suphan Buri received a high honour,” said Top. “The province’s population either exercises or supports sports, as do all government units, such as the provincial administration organisation, municipality, police, rescuers and public health officials. There are more than 100 people working out at this stadium every day. There’s futsal here too plus we have a X-Games field with a half-pipe behind the stadium. People can cycle outside or come and exercise inside. Suphan Buri is a small province but very hospitable.” 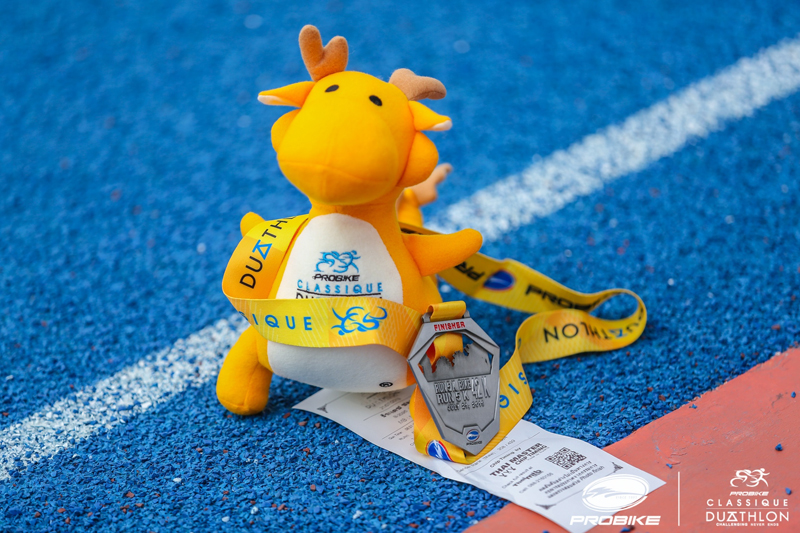 All participants who finished the race received a medal and a dragon mascot.

Thousands of runners and cyclists turned out for the event, among them sports personality Pannasorn “Aeh Glory” Patamapinunt and model Surampha “Golf” Yokchotisakul, as well as the Thailand Paracycling Team from Thai Para Cycling Association. 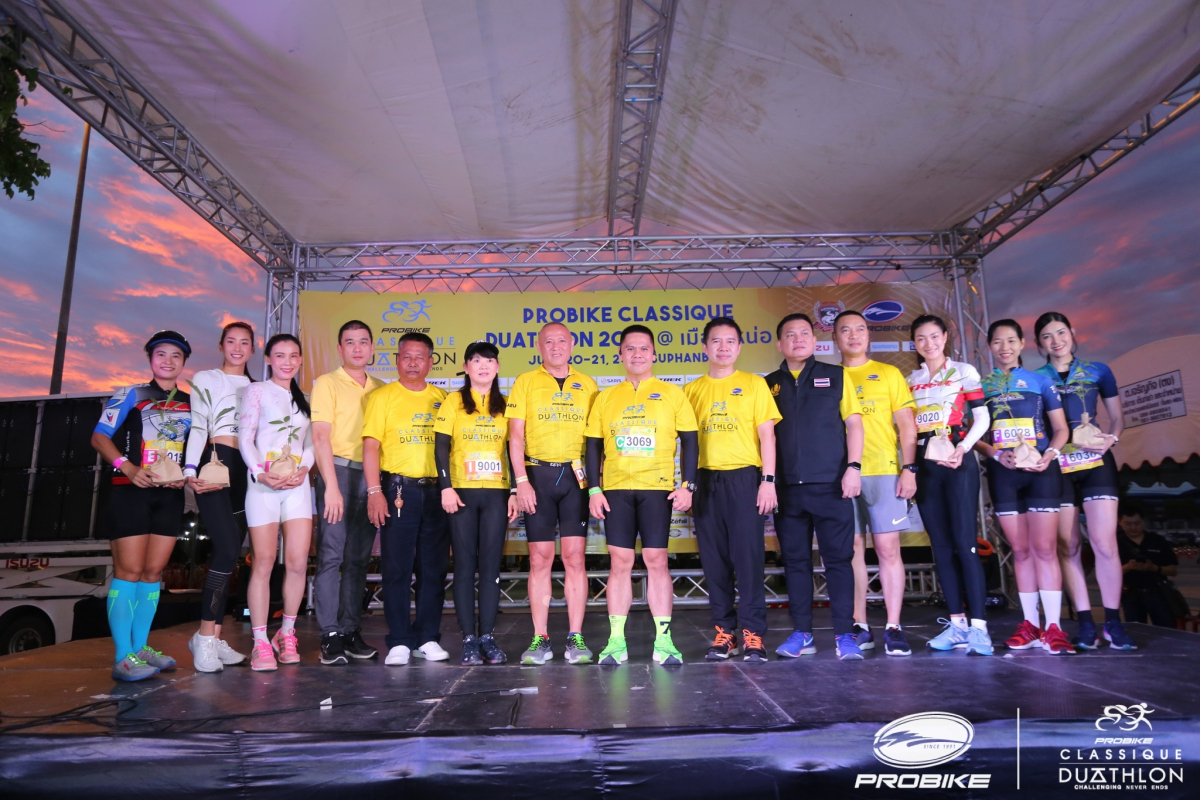 Varawut Silpa-archa and Natee Chaisinthop pose with supporters and celebrities.

The start time was rescheduled from 6.30am to 6am to avoid the heat. Participants started with a 5km run on the same course as last year but then turned into the stadium before mounting their bikes in the transition zone for a 42-kilometre ride. Russian athlete Vlasenko was the first and with his last 5km run came in at just one hour and forty minutes.

For pictures of this second event, go to www.probike.co.th.