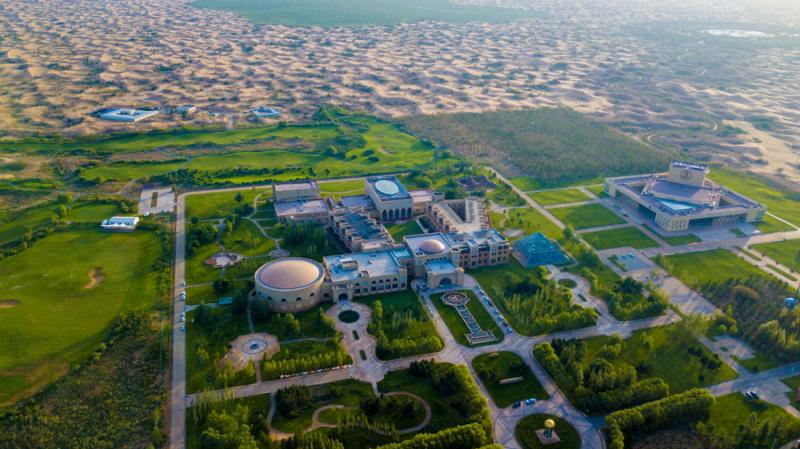 China has placed great emphasis on building an ecological civilization and made great headway in the prevention and control of desertification, Xi said in the letter to the opening ceremony to the two-day forum, which was held in Ordos, the Inner Mongolia autonomous region.

Containing desertification in the Kubuqi Desert allows the world to see China's experience in environmental treatment as well as the country progressing toward the United Nations 2030 Agenda for Sustainable Development goals, he said, adding that China actively promoted alignment between international cooperation on the Belt and Road Initiative and the implementation of the 2030 Agenda.

"The Earth is the only home to human beings, and anti-desertification is a great cause closely related to human development," Xi said. "China also stands ready to work with all sides to push forward global environmental governance and protection, and contribute to making the world a place with a well-preserved ecology."

To implement the agenda, Xi called for concerted efforts from the international community to enhance cooperation in combating desertification and promote global environmental governance.

Antonio Guterres, secretary-general of the United Nations, sent a congratulatory letter to the forum in which he commended China for its enormous contribution to the governance of ecology and the environment. He said that the forum is an opportunity to share success stories in and beyond China.

China is a country that has been threatened by the encroachments of deserts. The country has the world's largest area of desert, covering 2.61 million square kilometers, accounting for a quarter of its total land.

"However, China is also the country that witnessed the miracle of turning sandy land into green land. As the world's biggest contributor to the increase of planted forests, China has achieved the UN goal of stopping desertification expansion by 2030," said Vice-Premier Sun Chunlan at the forum.

The success of turning desert land into green in portions of the Kubuqi Desert — China's seventh-largest desert, covering 13,900 sq km, illustrates the wisdom of Chinese people and our great determination in areas of environmental protection, Sun added.

In the past decades, more than 6,000 sq km of desert in the Kubuqi has turned green due to collective efforts from local governments, enterprises and other organizations. The greening campaign created total ecological wealth of more than 500 billion yuan ($72.69 million) and provided about 1 million jobs to locals.

She said China's workable solutions to combat desertification have gained recognition from the international community. Now those experiences are bringing green hopes to those countries along the Belt and Road Initiative through international cooperation.

"China will spare no effort to provide help to other developing countries and contribute our efforts to combat desertification," Sun said.