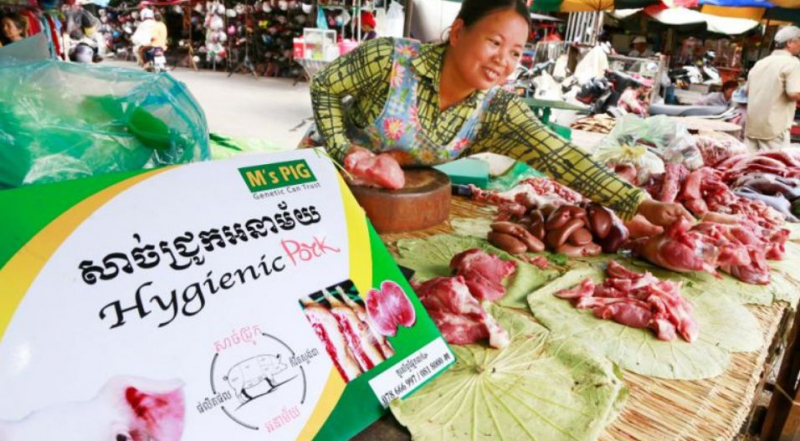 Ministries, relevant institutions, National and Military Police, the Phnom Penh Municipality and provincial halls nationwide are to work with the Ministry of Agriculture, Forestry and Fisheries to halt the illegal import of pigs and pork products, he said.

The prime minister’s directive comes after ASF outbreaks have been found in Ratanakkiri, Tbong Khmum, Svay Rieng, Takeo and

Kandal provinces after spreading rapidly from Vietnam following an initial outbreak in China.

“Humans cannot catch ASF, but the virus can have a 100 per cent mortality rate among pigs and cause the pork industry serious losses.

“To meet the situation head-on, and in compliance with the Law on Animal Health and Production and the regulations in place in Cambodia, the government has decided to lay out tougher measures immediately,” the directive states.

The Ministry of Agriculture must take stricter action to prevent the large-scale spread of ASF by regularly monitoring the health of pigs nationwide, improve sanitation in pig farms and employ bio-security measures where necessary.

Checks on pig sanitation and pork products are to be strengthened, while people are to be educated about the disease and take precautions against it.

The ministry must increase its monitoring of meat sanitation, and the quarantining, impounding or culling of sick pigs, the directive adds.

Customs and Excise officials under the Ministry of Economy and Finance stationed along the Kingdom’s borders are to immediately stop the illegal import of pigs and pork products.

“Farmers are the most affected when ASF breaks out. A large number of them have been forced to stop selling their pork products.

“The main factor in reducing the impact of ASF is to stop the movement of pigs in stricken areas,” Pov said.

Around 800 to 900 pigs had contracted ASF and had been destroyed, he added.