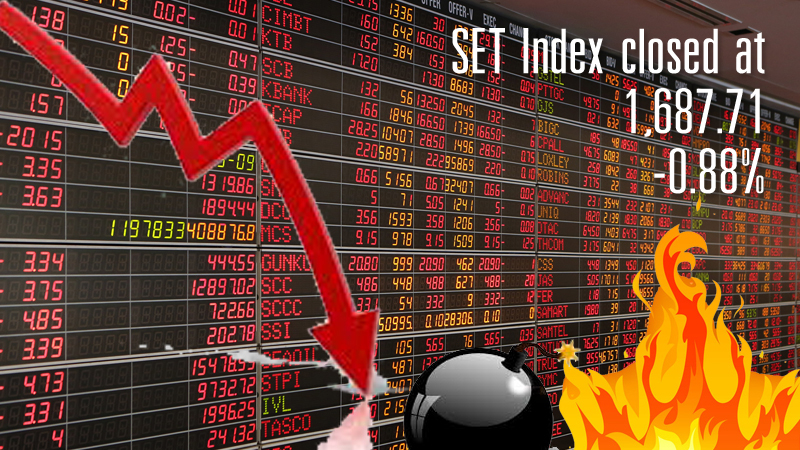 SET President Pakorn Peetathawatchai on Friday afternoon attributed the 20 points drop, or 1.6 per cent, mostly to external factors such as US imposing more tariffs on US$300 billion worth of imports from China and the Fed lowering its interest rate below market expectation. He said the blasts would have only a short-term effect on the market.

Pakorn said that the current SET Index drop was mainly due to investors being disappointed at the Fed’s rate cut. The Fed cut its policy rate by 25 basis points, half of the market expectation. President Donald Trump on Thursday declared that the US would levy 10 per cent tariff on imports from China valued at $300 billion, which also dented investor confidence, he said.

He said the scale of the SET drop is manageable and relatively small compared with other markets in the region. The SET Index had fallen in afternoon trading by 1.6 per cent when he spoke to the press.

Other Asian markets were also hit hard due to fears of the escalating trade war between the US and China as well as the trade dispute between Japan and South Korea. Japan’s Nikkei closed sharply, sliding 2.1 per cent, Hong Kong’s Hang Seng plunged 2.35 per cent, Shanghai fell by 1.4 per cent and Taiwan’s Taiex dropped by 1.7 per cent.

Pakorn said the market’s slide provided a window of opportunity for investors to buy many stocks which have been underpinned by sound fundamentals. Investors, however, should take risks into account before deciding on an investment. There is also a good chance to buy long term equity funds at this moment, he added.

Finance Minister Uttama Sayanayana also played down the impact of the small explosions in the capital, saying it would have only a short-term impact on the financial markets.

Uttama said he was confident the bombings would not affect investor confidence, as the authorities would be able to control the situation. He added that the one cause of the SET’s decline in morning trade was the ongoing trade war between major countries.

He said the ministry would soon launch stimulus measures for the second half of the year to take care of the farm sector and respond to the volatile global economy.