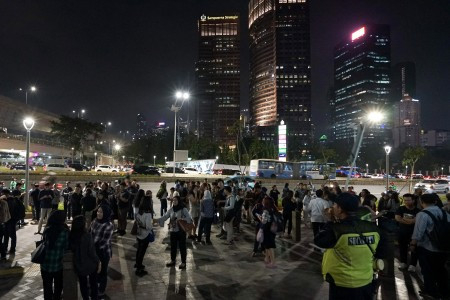 Employees gather outside their office buildings following an earthquake that struck Banten on Friday. (Antara/Dwi Prasetya)

The Meteorology, Climatology and Geophysics Agency (BMKG) issued a tsunami warning after a 7.4-magnitude earthquake struck Banten on Friday evening while urging residents to stay calm.

BMKG head Dwikorita Karnawati said the agency was still warning residents living along the southern coast of Banten to avoid beaches and move to high places.

The earthquake’s epicenter is located 147 kilometers southwest off the coast of Sumur, Banten, at a depth of 10 km. The United States Geological Survey (USGS) said in its announcement, meanwhile, that it had been a 6.8-magnitude earthquake.

Minutes after the earthquake, the BMKG alerted residents in Pandeglang, Banten, and West Lampung in Lampung province to brace for waves of up to 3 meters in height.

"Our standard operating procedure requires us to maintain the tsunami warning for two hours after the estimated time of when the waves reach the shore," Dwikorita said in a televised press conference on Friday evening.

Tremors were felt in Jakarta, Bandung in West Java and other areas in the southern part of Java Island. Twitter users have posted videos showing people in places like Sumur and Jakarta evacuating buildings.

The earthquake was as strong as the one that devastated Palu, Central Sulawesi, last year, which killed about 2,000 people and triggered a tsunami.