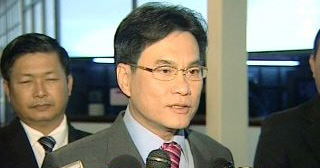 Commerce Minister Jurin Laksanawisit said a meeting organised by the ministry with the public and private sectors on August 14 will seek a common direction for Thailand and its trade partners as well as brainstorm solutions to circumvent the US-China trade war, which has significantly impacted local exports.

The ministry’s permanent secretary, directors-general of related departments, together with the private sector and related associations such as the Federation of Thai Industries, the Thai Chamber of Commerce, local shippers, and the Thai Bankers Association will take part in the first-ever public-private sector meeting.

“We will discuss factors that may be obstructing Thailand’s economic development, so as to find a consensus between the public and private sectors to mobilise our economy,” said Jurin.

More than 50 people are expected to take part in the joint meeting between the public and private sectors. The private associations are in the process of evaluating the current economic situation, especially the export sector. Many industries have revised down their export target from the previous 3-5 per cent growth to minus 2 per cent or zero to 1 per cent. They also would like the new government to manage the strong baht, which has appreciated continuously. They urged the government to offer tax measures to help local exporters as well as to find new markets and revive existing potential markets.