The depreciation of the yuan will put more pressure on the baht, as foreign investors will divert more money into the Thai bond market, say economists, warning of an unpredictable future.

The depreciation of the yuan against the baht and the US dollar is a major concern for Thailand, Thai Bond Market Association president Tada Phutthitada said on Tuesday.

After the US Treasury Department denounced China as a currency manipulator, foreign capital inflows into long-term Thai government bonds (maturity over one year) increased by Bt31 million against selling of short-term bonds worth Bt 409 million while net inflows in August month-to-date was worth Bt 4.7 billion. Net inflows into the bond market last year and in 2017 totalled Bt134.3 billion and Bt 222.9 billion respectively. 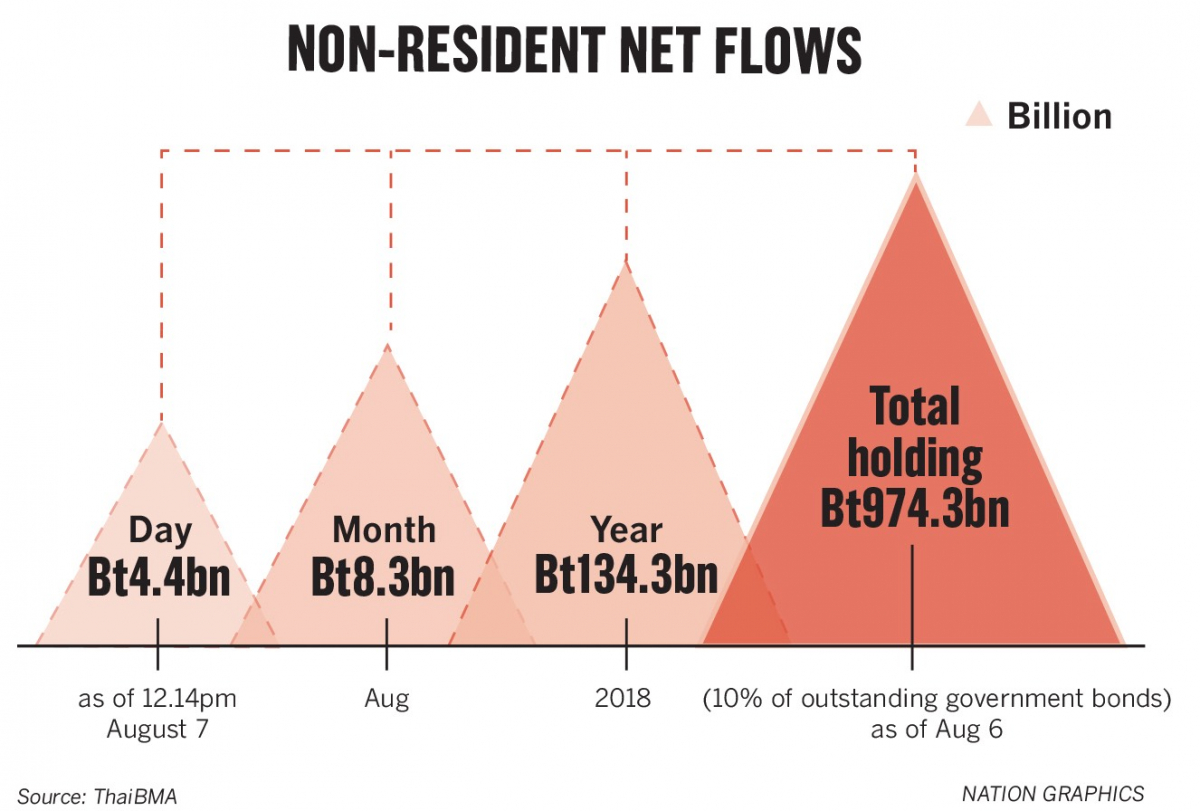 “Investors consider Thai bonds a safe haven for assets, so they entered the market over the past few days after the US Federal Reserve cut its key rate and the US-China trade war worsened with US denouncing China as a currency manipulator,” said Tada.

“Foreign investors have recently poured their money into several bond maturities, causing a flat yield curve that we did not foresee,” he said.

They expect global interest rates to go down while the Bank of Thailand will keep its policy rate unchanged.

As seen recently, it is unusual for the long-term bond rate to be lower than the policy rate -- currently at 1.75 per cent, he said, referring to the yield curve of two-year, five-year and 10-year bonds at 1.63 per cent, 1.62 per cent and 1.67 per cent respectively in afternoon trading on Tuesday.

The stronger baht would hit Thailand’s exports, already suffering from the global economic slowdown, he warned.

It could also hurt the tourism industry as last year 38 million tourists visited Thailand, and they shored up domestic consumption amid rising household debt that is eroding Thai consumers’ purchasing power. Among the foreign tourists, about 10 million were from China. The weakening of the yuan would affect their travel plans too, as well as Thai tourism and related services, he said.

The baht appreciated on Tuesday morning by about  5 satang to Bt30.72 to the dollar following the US announcement. The baht has risen against the dollar by about 5 per cent since early this year, largely driven by the large current account surplus over several years, estimated to be 6.7 per cent of GDP this year, Kobsidthi added.

Meanwhile, Teerana Bhongmakapat, former dean at Chulalongkorn’s Economics Faculty, said that the Thai economy will face high risk of uncertainty as it is hard to predict what will happen next after US President Donald Trump’s latest actions. The global markets now do not reflect economic fundamentals but their volatility has been fuelled by the heightened tensions from geopolitical conflicts between the world’s two largest economies, the US and China, he said. Given such a background, the baht’s misalignment with regional currencies could widen, moving far away from economic fundamentals, he warned.

“Looking into the future, it is an unknown territory,” Teerana warned.

Although China’s yuan has weakened, passing the 7 yuan to the dollar barrier, Teerana did not believe that China’s authorities had intervened in the market in order to weaken it.

“I think China actually has been trying to stabilise the currency. The yuan was hit by foreign speculators who are taking profit from the fall in the value of the Chinese currency,” he said. Some hedge funds recently made a loud noise about the slowdown in growth in China and the impact of the trade war. The latest US action, accusing China of being a currency manipulator, seems to validate their reasons for selling the yuan, he said.

Teerana believed that capital outflows, slower economic growth in China and the impact of the trade war are major factors for the weakening yuan.

The Stock Exchange of Thailand Index yesterday rose 0.33 per cent, closing at 1,671.48. Investors may have been encouraged by news that the new government will implement economic stimulus package this month, said Kobsidthi.