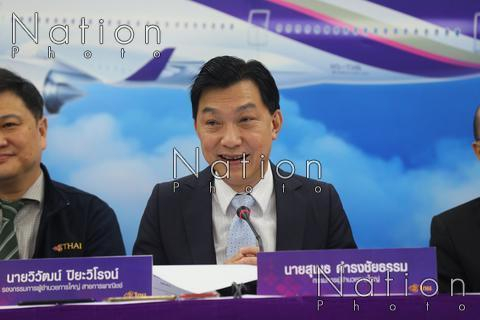 THAI's president Sumeth Damrongchaitham speaks to the press on Tuesday. – The Nation

Thai Airways International (THAI) will consider leasing out three new aircraft and selling four existing aircraft to boost its revenue for the rest of this year after the carrier reported a net loss of Bt6.43 billion in the first half of this year, the company’s president Sumeth Damrongchaitham said on Tuesday.

“We expect our total revenue in the second half of this year to be better than the first half, when the baht depreciates now that the Monetary Policy Committee has cut the policy interest rate by 0.25 per cent early this month and September, high season for tourists, arrives,” he said.

The national carrier is planning to boost the number of aircraft leased to European airlines by three and sell four existing airplanes and will propose this plan to its board soon.

The airline will also buy foreign exchange after sustaining losses of 5 per cent when the baht appreciated in the first half of this year compared to the end of last year.

As for the plan to buy 38 new aircraft worth Bt156 billion, it needs to be reconsidered because the government has insisted that the funding for the purchase must come from the company, he said.

Sumeth added that the airline has also announced its cost-saving schemes such as SaveTG Co-Creation, which reduces its management cost without having an impact on its service quality.

The airline is also collaborating with other organisations to reduce its cost by following a zero-waste management policy. THAI is also planning to introduce new direct flights to Sendai, Japan in the last quarter of this year.

THAI is also focusing on digital marketing to boost customers and reduce costs, and is cooperating with its business partners and subsidiary ThaiSmile to provide services and increase its income, he said.