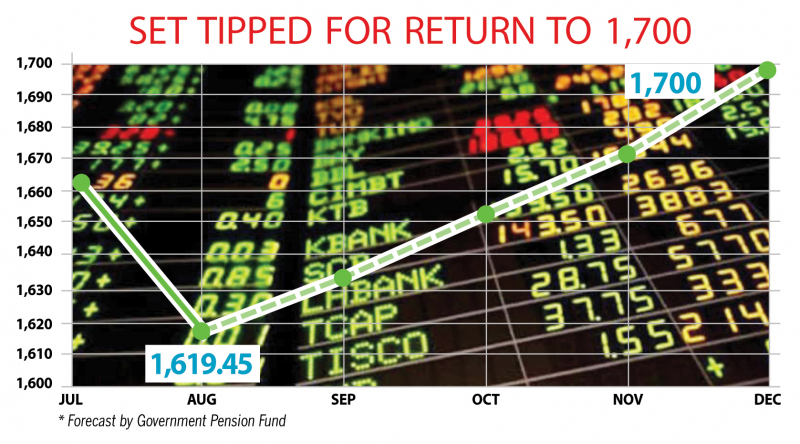 The Government Pension Fund (GPF), the largest local institutional investor, has returned to the Thai equity market and predicts the market would rebound to the 1,700 level by the end of this year.

As the Stock Exchange of Thailand Index (SET) Index has been falling currently, it is a good opportunity to buy because the market downside will be limited, GPF secretary-general Vitai Ratanakorn said.

The GPF had divested its investment in the local equity market, but we have started to buy more shares, he revealed.

“Looking towards the medium term, the risk factors become limited and the index could rebound to 1,700 by the end of the year,” he said. He was optimistic that once domestic conditions become conducive, investors would return to the stock market.

Despite the bond yield falling, the GPF would continue to invest in fixed-income securities and start to invest in bonds with maturity of three or four years, up from two-year maturity previously, he said.

He believed that central banks around the world, including the Bank of Thailand, might cut the interest rate again this year but it would not be much as a low interest rate would hit a limit.

Fixed-income securities dominate the GPF portfolio, accounting for 62 per cent of total investment. Thai equities represent 7.5 per cent. Foreign equities of developed and emerging markets represent the rest. The GPF has also invested in alternative assets such as property fund and infrastructure fund.

The GPF portfolio has delivered an attractive return of 4.3 per cent annually over the last five years, and it is expected to rise to 4-5 per cent by the end of the year, he assured.

The fund also gives priority to the environment, social and governance issues by setting up an environment, social and corporate governance (ESG)-focused portfolio. It will also join other institutional investors on a collaborative engagement project by investing in line with the negative list guidelines. Next year, the GPF will invest only in companies that meet ESG guidelines.