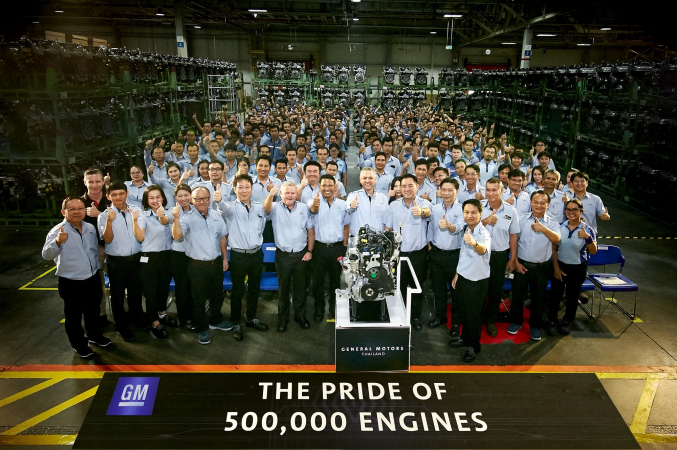 GM said the Rayong plant is the first GM facility in the world to produce the four-cylinder Duramax turbo-diesel engine.

Hector Villarreal, president of GM Southeast Asia, said: “The Duramax engines serve as the heart of our award-winning Colorado and Trailblazer. They are one of the most important components that we manufacture in Rayong for both domestic and export markets. Reaching half a million engines is not only an important milestone for the GPS team but also for everyone at GM Thailand. You should all be rightly proud of achieving this together.”

Amnat Saengjan, vice pesident of manufacturing for GM Thailand, added: “GM Powertrain Thailand is the only GM facility that fully manufactures the 2.8L Duramax diesel engine. Our exports represented over 20 per cent of total production, 80,000 engines of the four-cylinder diesel 2.5L and 2.8L Duramax engines in 2018. Today, we celebrate not only the successful production of the 500,000th Duramax engine by GM Powertrain Thailand, but the teamwork from all of you that has made this possible.

“I am very proud of our team members who have taken a key role in helping us achieve this milestone, thanks not only to every team member’s hard work and dedication, but also to the growing popularity of the products that use the Duramax engine, the Chevrolet Colorado and Trailblazer. It shows how far we have come.

“We are a world-class facility, but we need to keep up the momentum by staying together as a team and making quality the number-one principle in everything we do today and in the future.”

He said GM Thailand’s Rayong facility was recognised for its efforts in environmental conservation at the Prime Minister’s Industry Awards of 2018. It was one of two automotive companies that received this award. The facility is part of GM’s 142 manufacturing and non-manufacturing landfill-free facilities globally.