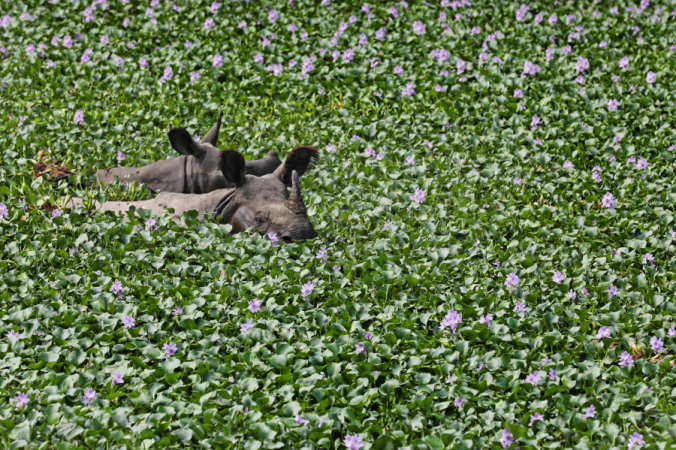 KP Sharma Oli wants the world to refer to rhino as gaida. But can the world even pronounce it?

Prime Minister KP Sharma Oli has once again professed his aversion to the rhino—no, not the animal, but the word ‘rhino’.

On Monday, addressing 400 delegates from over 43 countries at the 56th Director Generals of Civil Aviation conference in the Capital, Oli went off script, imploring the audience to use the Nepali word for the armour-plated one-horned beast found in the jungles of the plains, instead of its English name.

“In the past ten years, we’ve doubled tigers. We have similarly doubled ‘gaidas’,” Oli said. “Do you know what…gaida [is]? You people know gaida as rhino. But rhinos are not rhinos, they are gaida. I request you to remember this word—gaida. I am surprised sometimes because even in places without any gaida, people use the name rhino because they are comfortable with the term.”

“But gaida are gaida,” Oli concluded, “which are protected very well in the southern part of our country.”

Oli’s distaste for the English name of the pachyderm dates back to at least 2015, when, during a press meet with his CPN-UML comrades, Oli gave an impromptu monologue that has come to be known as the “Gaida Puran”, spawning several memes across social media.

“Where did this term rhino come from? How did rhino come in the English language? How can there be [the word] ‘rhino’ in a country that has none?” he asked in a series of rhetorical questions.

Oli then went on to make a wild assertion: “Gaida is born neither in America nor in Europe. Nor Australia. One has to come here to see a gaida. If one doesn’t see a gaida once in a lifetime—even if they might be from a developed country, or whoever they are, however rich they are—are they even human? Half of their life is wasted.”

The word rhinoceros is derived from the Greek word ‘rhinokeros’, meaning nose-horned. The word is often abbreviated to rhino, used broadly for all variants in the family of Rhinocerotidae. The Oxford Learner’s Dictionary defines rhinoceros as “a large heavy animal with very thick skin and either one or two horns on its nose, that lives in Africa and Asia.”

In 2015, Oli had gone on to say that anyone who wanted to see a rhino—or rather, a gaida—had to come to Nepal, which, of course, is inaccurate. Rhinos are native to all of South Asia and parts of Africa, where the native population refers to the animals by their local names. They can also be found across the world, in zoos and enclosures.

But the prime minister is prone to hyperbole. On Tuesday, Oli also said that Nepal is home to all 14 peaks above 8,000 metres. That’s also untrue—only eight of them are in Nepal; the rest are in Pakistan and China.

Oli also insisted that Mount Everest be called by its Nepali name—Sagarmatha—when the far older name for the world’s highest peak is Chomolungma, as the Sherpas and Tibetans called it for decades before it was named Mount Everest or Sagarmatha. The historian Baburam Acharya is credited with coining the Nepali name as late as 1956. If Oli demands that the mountain be called by its indigenous name, Chomolungma would have been a better bet.

But back to gaidas. The rhino is an endangered species, currently found in parts of Africa and South Asia, including Nepal. In Swahili, the rhinoceros is called a kifaru; in Zulu, the word is imikhombe. In Hindi, like in Nepali, it is called ‘gaida’. The Chitwan National Park might be popular for its one-horned rhinos (Rhinoceros unicornis) but these same species are majorly found in India, with Kaziranga National Park hosting over 2,400 individuals, compared to roughly 645 in all of Nepal.

Among the five major species of rhinos, “White rhinos and black rhinos live in the grasslands and floodplains of eastern and southern Africa. Greater one-horned rhinos can be found in the swamps and rainforests of northern India and southern Nepal,” according to a 2018 article published by Live Science. “Sumatran and Javan rhinos are found only in small areas of Malaysian and Indonesian swamps and rainforests.”

The conservation of rhinos and their rarity often makes news, which is perhaps where Oli’s obsession with the species stems from.

Following the prime minister’s comment on Monday, one Twitter user wryly commented on his affinity for Nepali nomenclature as opposed to English ones.