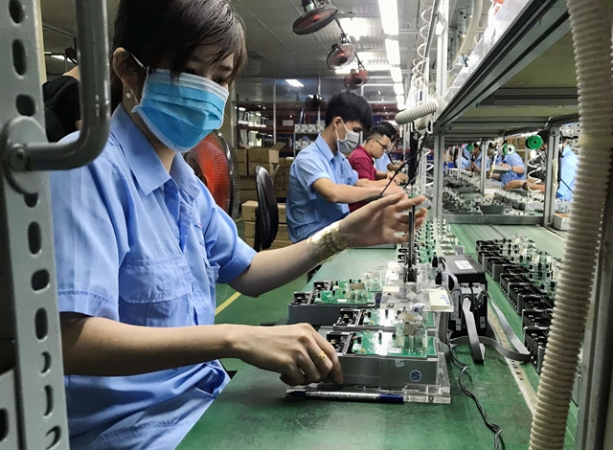 Vietnam is Asia’s bright spot amid global trade tensions, said the latest report on the country by the United Overseas Bank Limited (UOB), which forecast Vietnam's economy will expand 6.7 per cent in 2019.

The country’s economy expanded 7.1 per cent in 2018, the fastest growth in 11 years. All major sectors recorded growth, including manufacturing, construction, and wholesale and retail, which rose 13 per cent, 9.2 per cent and 8.5 per cent respectively.

In the first half of this year, the economy grew 6.8 per cent, driven by significant growth of exports and industrial production which were buoyed by increasing foreign investment in labour-intensive, export-oriented manufacturing and processing industries.

“We are projecting Vietnam’s gross domestic product (GDP) growth at 6.7 per cent and inflation of around 3.4 per cent for 2019. This will rank Vietnam as one of the fastest growing economies in the world,” the report said.

The US-China trade tensions, which show little signs of abating, have been affecting global supply chains. The threat of high tariffs on Chinese imports has forced manufacturers to consider shifting their production to alternative locations in order to mitigate the impact from the trade tariffs.

According to the report, Asean countries, particularly Vietnam and Malaysia, will be the most favoured destination of investment relocation of multinational enterprises.

Data showed that FDI inflows in Vietnam surged since the onset of US-China trade tensions in the third quarter of 2018. Ending 2018, FDI into Vietnam increased 9.1 per cent year on year, reaching a record high of US$19 billion.

The number could exceed $20 billion this year with more new projects launched, the report forecast, showing in the first seven months the number of new FDI projects in Vietnam increased 25 per cent over the same period of last year to 2,064 projects.

Strategic location, competitive wages, young population and excellent network of trade agreements are strengths of Vietnam as an export production base, which make it attractive for production relocation of foreign enterprises.

In terms of monetary policy, the report expected the State Bank of Vietnam to maintain its stable policy with the refinancing rate of 6.25 per cent throughout the year.

It forecast the Vietnamese dong to be at 23,400 to the US dollar in the third quarter and 23,600 in the last quarter this year.

However, in the mid- to long-term the Fourth Industrial Revolution (Industry 4.0) may undermine Vietnam’s current advantages such as low labour and land costs as it will face challenges from other cheaper locations and advancing technologies.

Vietnam’s leaders are keenly aware of the challenges and benefits of Industry 4.0, and are taking steps towards its implementation, the report said. Economic reforms along with Industry 4.0 could potentially increase the size of Vietnam’s economy by between $28.5 billion and $62.1 billion, equivalent to an economic growth rate of 7-16 per cent annually by 2030.