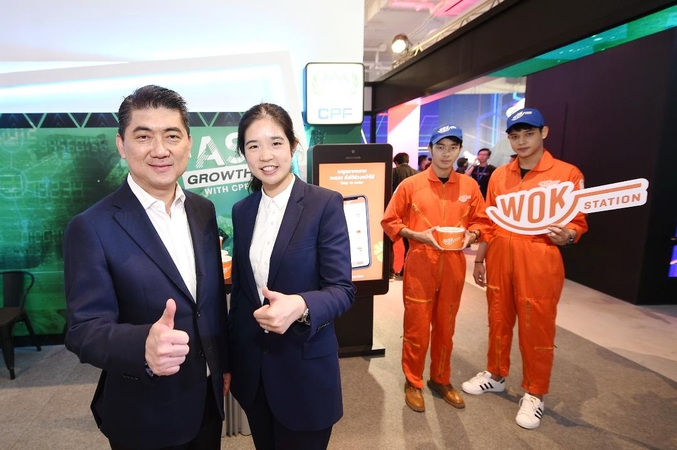 Over the past few months, the brand has opened three restaurants at Avenue Ratchayothin, Don Mueang International Airport and 101 True Digital Park, the latter serving as its flagship outlet. Wok Station plans to open 10 branches by the end of this year and expand to overseas markets in 2020.

Dak Galbi Group is led by four new-generation entrepreneurs in their early 20s and opened its first Dak Galbi restaurant in Siam Square in 2012 at the height of K-pop fever. The restaurant quickly caught thanks to its outstanding food concept and was the first Korean restaurant in Thailand to serve “Dak Galbi”, stir-fried marinated chicken with Korean chili pepper sauce, which proved popular among Thai diners.

The Group has set its sights on developing itself from a start-up into a global restaurant chain and the new Wok Station is working towards this by positioning as a quick service restaurant (QSR). The menu features a range of Asian street food and cooked-to-order dishes that are tasty, clean and affordable and use high-quality ingredients sourced from reliable suppliers and farms. The restaurant’s target group includes the health-conscious, from the new generation to office staff. Wok Khao San Road and Wok CP Tower Silom are both set to open before the end of the month.

“Having travelled to many countries, I’ve found that Asian food, especially Thai food, is hugely popular with diners the world over. But most Thai restaurants overseas are fine dining establishments. The prices are high, especially at the good ones. And sometimes diners have to queue. As a Thai, I reckon that it’s not hard to cook and serve Thai food to people around the world at reasonable prices just as some of the American brands do,” said Preeyawan Tantasuralerk, the Group’s managing director. “So we have come up with a QSR model for our restaurant chain that has potential to expand globally. We know Thai people love warm, freshly cooked food. One of the pluses of WOK Station is that it has a diverse menu of dishes freshly cooked in an open kitchen. The menu features two food styles. “Create for You” refers to a range of freshly created dishes such as “Wok chicken fried rice”, “Stir-fried spicy Canadian lobster tom yum with vermicelli”; and “Spicy stir-fried spaghetti with holy basil and Hokkaido scallop.” “Create Your Own” consists of dishes designed by customers themselves based on the available ingredients. This menu has more than 1,000 dishes to choose from, with prices starting at Bt75.”

The restaurant uses a warm color scheme dominated by orange to establish the restaurant’s sizzling mood and tone while the staff are dressed in outfits inspired by firefighters to convey the idea that servers and other staff members are regularly caught in a hot environment. Layered with an apron, the outfit echoes the brand’s concept that focuses on serving freshly cooked creations.

“We want Wok Station to be a hunger station that represents the restaurant’s theme that permeates its overall design. The restaurant displays a signboard that looks like a bus stop sign. We want people to be hungry when seeing it. We are planning to have Wok Stations open 24 hours in some areas to meet our goal of being a round-the-clock dining outlet.”

WOK Station will also introduce countertop food warmers for takeaways for a grab-and-go style of dining during the rush hour. As for technology, WOK Station uses the latest innovations to increase the efficiency of restaurant management. The backdoor systems utilize sophisticated technology to ensure smooth delivery of ingredients, which allows for efficient restaurant management and the Group is currently developing a food ordering application.

Dak Galbi Group is supported by Charoen Pokphand Foods Pcl. (CPF) and is hoping to open outlets in China as soon as next year. Prasit Boonduangprasert, chief executive of Charoen Pokphand Foods Pcl. (CPF), says that the company is well aware of the potential of Thai start-ups and the limits confronted by these entrepreneurs. The company has a policy to support Thai restaurant startups so that they can overcome these obstacles and live out their dream of growing and developing their restaurant businesses into global restaurant chains.

“The company considers providing support to startups that have the determination to create their own restaurants successfully. They must have the vision to expand their restaurant chains locally and overseas, which is CPF’s goal. The company is ready to support in the way of technology, backup systems, and channels for business expansion as well as financial support,” Prasit says.