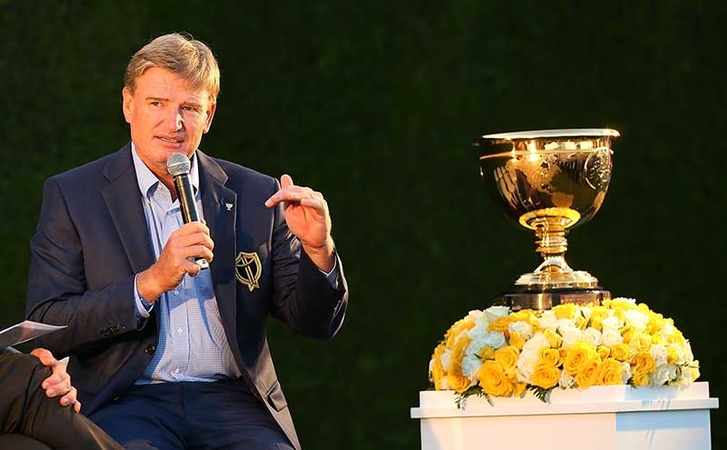 Melbourne – International Team Captain Ernie Els has kept the door open for Asian stars to earn a potential captain’s pick for the Presidents Cup against the United States Team at The Royal Melbourne Golf Club, Australia from December 9 to 15.

Els said he will keep close tabs on Thai duo Kiradech Aphibarnrat and Jazz Janewattananond and Korea’s Sungjae Im and Byeong Hun An before he determines his four captain’s selections in early November.

After the first top-8 players were finalized through a one-year qualifying process last week, the South African legend said he would not hesitate to call up more rookies to fill his team’s roster despite already having four debutants – Haotong Li of China,  C.T. Pan of Chinese Taipei, Mexican Abraham Ancer and Australia’s Cameron Smith –  through automatic selection.

“I've said to the guys in the meetings that I'm not scared to choose rookies. If I see a rookie playing really good golf and he's up for it, then I'll go for him,” said Els in a media teleconference earlier today to discuss his team’s preparation for the prestigious team matchplay showpiece.

“But they've got to really show me something to go down the list that far, because I've got guys knocking on the door like Jason (Day) and I've got Justin Harding and I've got Jazz (Janewattananond), who's won twice on the Asian Tour this year. I've got Sungjae Im, who's played 34 events on the PGA TOUR and made it to the TOUR Championship as a rookie. I'll speak to the top eight and we're going to have a lot of discussion about who their new four friends are going to be because they're going to have to play together and blend as a team.”

The highly-talented Jazz, 23, missed out on automatic selection by two rungs on the team’s points list while a knee injury scuppered Kiradech’s fight to gain a top-8 spot despite safely keeping his PGA TOUR card through three top-five finishes, including twice at World Golf Championships events.

The Korean trio of An, a former U.S. Amateur champion, 21-year-old Im, who has enjoyed a strong rookie season on the PGA TOUR by qualifying for the FedExCup Playoffs Finale, the TOUR Championship, and Sung Kang, who claimed a first PGA TOUR win in May, are also very much on Els’ radar.

“You know, Sungjae has been playing on the PGA TOUR Tour, he's played 34 events. He won the Korn Ferry Tour last year … hopefully Sungjae keeps playing good and he gets himself on the team. I'm definitely looking at him,” said Els.

“Sung Kang was playing really well, won in Dallas, and was looking really good. His form has slipped a little bit. I love his attitude towards the game. I even look at Ben An, his game is really great. He almost won in Greensboro this year, and he's had some really great finishes. He's one of the supreme ball strikers around the world, which I really love and which you need to do in Melbourne. Those two guys I'm definitely looking at, especially Ben An. He's on kind of my favourite list.

“A lot of these guys are going to be playing the big events in the next couple of weeks and months. You know, from Asian players, Kiradech Aphibarnrat, he's kept his card very comfortably here in the U.S. To keep your card on this TOUR is tough, especially as a rookie, and a lot of these guys have had that pressure on them this year. So Kiradech has done very well. Jazz is having a great year. I played golf with him in Malaysia this year, saw his game from close by. He'd be great around Royal Melbourne.”

Els keeps emphasising to his team members that the Presidents Cup could be a life-changing experience, especially when the International Team has won the event only once previously against the U.S. Team. The lone victory came at the 1998 edition at Royal Melbourne.

“I really hit it right to them that this could be a real - one of the biggest events of their lifetimes because - just because we are such a diverse team from right around the world. We have huge following. We have people from Asia, from Mexico now, we've got possibly Canada. We have an audience of billions of people if you look at the countries' numbers,” said Els.