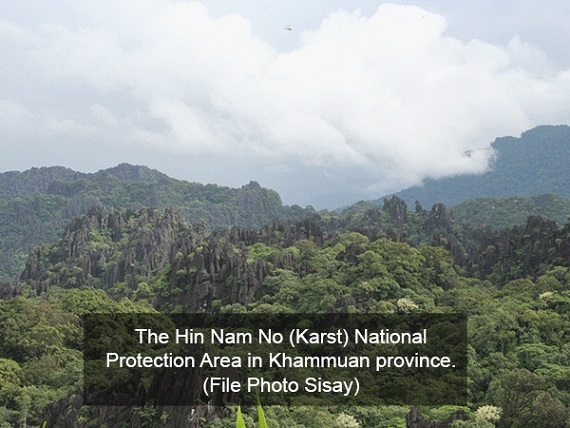 Laos is speeding up the preparation of documents to request listing of the Hin Nam No (Karst) National Protection Area in Bualapha district, Khammuan province, as a UNESCO World Heritage Site.

The meeting reported on the preparations being made to submit an application to UNESCO, and was attended by a delegation from Vietnam.

The ministry is preparing documents in cooperation with the Vietnamese government to record the Hin Nam No National Protection Area as a transboundary World Heritage Site together with Vietnam’s Phong Nha-Ke Bang National Park.

The meeting was an indication that Hin Nam No and its proposed UNESCO listing is a matter of national pride for Laos.

This was the first time that delegates from Vietnam had been invited to attend a meeting of the Lao national steering committee on world heritage.

The proposed transboundary World Heritage Site comprising the Hin Nam No National Protection Area and the Phong Nha-Ke Bang National Park is seen as an important legacy of the longstanding friendship between Laos and Vietnam.

The Ministry of Information, Culture and Tourism indicated that preparations for the submission of the application for world heritage listing are well under way and has the support of all stakeholders and the entire country.

Being the home and custodian of a new world heritage site that includes both Hin Nam No and Phong Nha-Ke Bang would mean that Laos is becoming part of a global community of countries that protects nature’s heritage and values for all mankind. Furthermore, Laos would be the first country in South-East Asia to have created a transboundary world heritage site together with a neighbouring country, according to the Ministry of Information, Culture and Tourism.

Laos currently has three World Heritage Sites. The Plain of Jars was listed by UNESCO last month, while the old town of Luang Prabang was inscribed in 1995, followed by Vat Phou Champassak in 2001.