A computer designed with university students in mind, the new MacBook Air is as slim and light as ever but boasts even better looks and a lower price so as not to overstretch the budgets of the young. It is positively skinny at 41 millimetres to 15.6mm thick and in its lightest configuration weighs just 1.25 kg.

The notebook comes in a sleek aluminum chassis and is available in Space Grey, Silver and Gold. I was given the gold version and it earned plenty of admiring looks when I carried it around with me.

The new MacBook Air comes with a 13.3-inch (diagonal) LED-backlit display with IPS technology and has 2560-by-1600 native resolution at 227 pixels per inch. True Tone technology used on the Air’s retina display gives off a more natural viewing experience.

The True Tone technology automatically adjusts the white point of the display to match the colour temperature of your environment and that makes web pages and email look as natural as the printed page. And the high resolution of 4 million pixels-plus allows you to see images and video in great and realistic detail while text looks sharp and clear.

And since the display has 48 per cent more colours than the previous generation, viewing is rich and vibrant. That is helped by the display being housed in a frame whose borders are 50-per-cent thinner.

The new MacBook Air is designed for students and general use and is more than powerful enough for business and everyday applications, like Microsoft Office. It is powered by 8thGeneration Intel Core i5 dual-core processor running at 1.6 GHz, equipped with 8 gigabytes of 2133 MHz DDR3 working memory or RAM and comes with 128GB SSD storage. A version with 256GB storage is also available. The 128GB storage may sound small but you can expand it with external storage using a USB-C port. 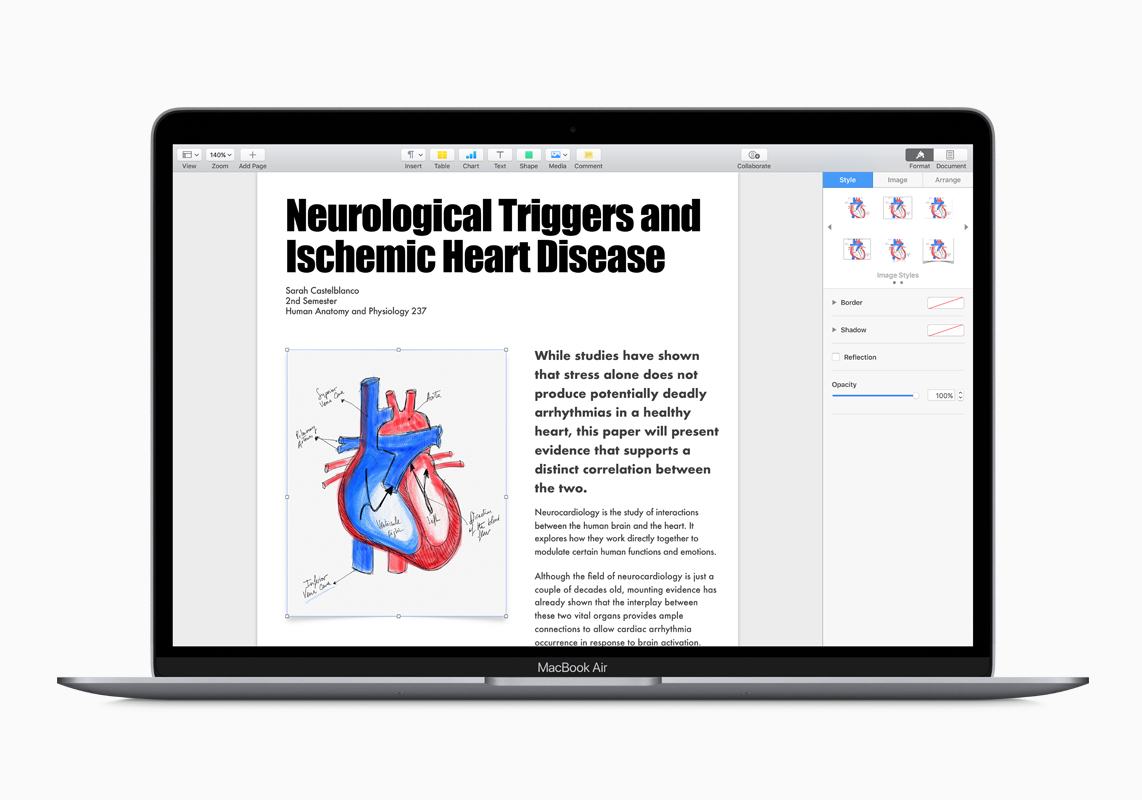 Apple’s popular Back to School promotion is back with great savings for higher education students.

Two Thunderbolt 3 (USB-C) ports are provided and each can be used to recharge the notebook or as a DisplayPort to an external display. The Thunderbolt is capable of outputting data up to 40 Gigabits per second to the external 4K display, for example. The USB-C ports also support the protocol of USB-C 3.1 Gen 2 that has data throughput of 10Gb/s.

The new MacBook Air is not suitable for extensive graphics games as it uses integrated Intel UHD Graphics 617 as its graphics engine. But it supports Thunderbolt 3-enabled external graphics processors (eGPUs) in case you need maximum graphics horse power.

During the test, I found the new MacBook Air performed smoothly and fast when I used business applications, like LibreOffice. Video clips played smoothly and web pages were rendered fast and beautifully.

The new MacBook Air has a better sound system than its predecessor too. Its stereo speakers deliver twice the bass and 25-per-cent more volume than the previous generation. That’s particularly good for watching movies and listening to music.

And the notebook comes with a three-microphone array to capture your voice more accurately when you make FaceTime video calls. The new MacBook Air provides FaceTime HD camera.

And although the new MacBook Air is housed in a 13-inch body, I found that the keyboard is spacious and comfortable to type on. It uses the latest-generation keyboard for MacBook Air that features a “butterfly mechanism”, which provides four times more key stability than a traditional scissor mechanism while also allowing greater comfort and responsiveness. Moreover, each key is LED-backlit and the keyboard comes with an ambient light sensor so you can type in low-light environment.

The keyboard comes with Force Touch trackpad that lets you interact with the notebook in a variety ways based on subtle differences in pressure. It also supports Multi-Touch gestures like pinch and zoom. The new trackpad is also about 20 per cent larger than the previous model.

Group FaceTime makes collaborating on projects easier than ever.

What I liked most about the new MacBook Air is that its keyboard is now integrated with Touch ID and fingerprint reader. The Touch ID sensor is located at the top right corner of the keyboard. You can use your index finger to unlock the MacBook Air, locked documents, notes and system settings immediately without having to retype on the keyboard. You can also use your Touch ID through the fingerprint sensor to pay for online shopping, using Apple Pay.

The new MacBook Air features the Apple T2 Security Chip – the second-generation custom Mac silicon designed by Apple to make MacBook Air even more secure. So when you use Touch ID to unlock your Mac, authenticate a document, or pay a merchant online, your information stays safe.

The notebook runs on macOS Mojave that is intuitive to use and it also comes with powerful built-in apps, such as Pages, Photos, Numbers, iMovie and Safari. The macOS allows you to work with your iPhone by sending and receiving text messages that are sent to your iPhone on the notebook. You can also start a document, email, text, or note on your MacBook and finish it on your iPhone or vice versa.

And Apple has announced that when the new macOS Catalina is released later this year, the new MacBook Air can also be upgraded. Apple says Catalina is packed with cool new features, fresh new apps and powerful new technology for developers. MacOS Catalina comes with Apple’s popular entertainment apps – Apple Music, Apple Podcasts and the Apple TV app – and the all-new Sidecar feature enables users to extend their Mac desktop by using their iPad as a second display or as a high-precision input device.

The notebook uses a 49.9-watt Lithium Polymer battery with about 12 hours of battery life for browsing web pages.

The new MacBook Air with 128 GB storage retails for Bt35,900. University students can show their student ID card to buy it for Bt31,900.

Display: 13.3-inch (diagonal) LED-backlit display with IPS technology; 2560-by-1600 native resolution at 227 pixels per inch with support for millions of colors