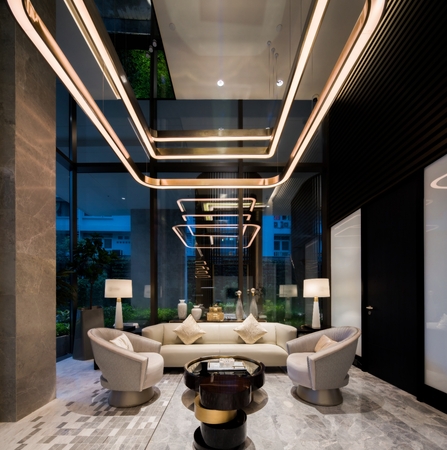 Land price on Chidlom has surged to Bt3.5 million per square wah this year from Bt1.9 million in 2015 due to the shortage of vacant plots in the location, said Prayongyut Itthiratchai, first vice president of SC Asset Corporation Plc, after the opening of the company's 28 Chidlom project at a press conference today.

Meanwhile, unit prices of the new condominium have risen by 10 per cent from 2016 when the      luxury project was launched in the market, he said.

The demand for condominium units among foreign investors has seen  slight growth as the baht strengthens, Prayongyut added.

Thais accounted  for  91 per cent of  buyers in the project  with overseas customers  from Hong Kong, China and Singapore making up the balance.

“Most foreigners have delayed making a decision to purchase this year whereas overseas buyers of   28 Chidlom had to settle a down payment equivalent to  more than 20 per cent of the unit's price,” he said.

28 Chidlom comprises two buildings, worth a total of  Bt8 billion. The first, the Villa,  consists of  20 floors, of which 40 per cent of  the 182 units have been sold. Unit types in the building range from one to three bedrooms with  usable space from 37-132 square meters.

The other building, the Tower, houses 47 floors and 243 units. Unit types range from one to three bedrooms and penthouses with the usable space from 40-200 square meters. 80 per cent of all units in the building have been taken up. .

The company has started the transfer of units to buyers and expects to hand over properties worth a total of Bt3.5 billion by end of this year.

The company will transfer condominium units worth a total of Bt6.5 billion this year.  Units with Bt3 billion in value were handed over to buyers in the first half,  he said.

According to a survey by Colliers International (Thailand) Co Ltd,  the new supply of condominiums in the second quarter of this year totalled 26 projects,offering  9,632 units worth  Bt74.87 billion. An average 38 per cent of these projects have been sold since booking started.