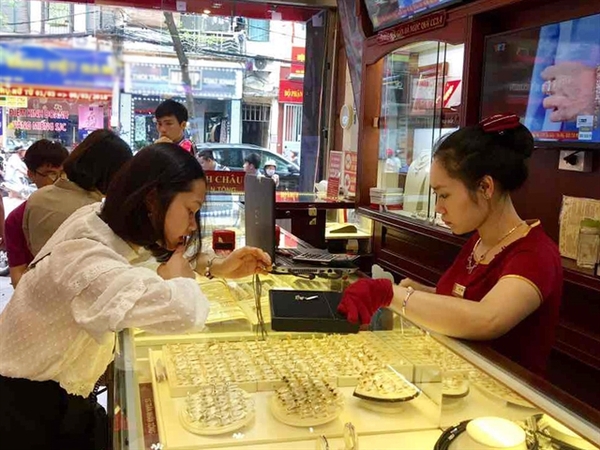 A Bao Tin Minh Chau Jewellery and Gemstone Company store. Though gold prices have declined in the first week of September, the forecast for the rest of the year remains uncertain. — Photo btmc.vn

Amid gold prices showing signs of decline, experts in Vietnam are warning that the future of the precious metal is unpredictable.

Tran Thanh Hai, chairman of the Vietnam Gold Investment and Trading Corporation, said it was not easy for short-term traders to earn profit from gold trading right now.

Selling prices on Friday ranged between 42.23 million dong and 42.47 million dong a tael at the two largest gold trading firms, Bao Tín Minh Chau and SJC. The price levels were down about 500,000 dong from those recorded on August 30 – the last trading day that month.

The number of buyers was almost unchanged in the first week of September compared to the previous week, they said.

People sold more than they bought, forcing gold companies to lower their buying prices to prevent selling, they added.

Banking experts said that gold was no longer an attractive investment, especially when commercial banks were offering high saving interest rates – which is considered safer and more profitable at the moment than gold.

As a result, banks are not paying attention to buying gold, leading to the decline of gold traders and investors at the bank, according to the experts.

Sales of gold and gold products in the last two months were up only 1-2 per cent compared to the previous period, Nguyen Hoang Minh, deputy governor of the State Bank of Vietnam’s HCM City branch, told local media.

The modest increase indicated demand was growing slowly despite strong gains in both domestic and international markets, he said.

“The amount of gold available for lending is quite negligible. The central bank’s HCM City office has kept up with the movement of gold prices to deliver proper responses but actual demand and sales of gold and gold products are quite weak.”

In the remaining months of the year, international gold prices might not reach $2,000 an ounce while it might continue falling in a short period before going again in the medium and long terms, investment consultant Phan Dung Khanh at Maybank Kim Eng Securities Co said.

Gold might move between $1,500-$1,600 an ounce. It was unlikely that gold would soar in the remaining period of the year, he said.

But the future movement of gold prices was still uncertain, analysts have said. Investors should not jump in the gold market at the moment, especially if they had not kept a close watch on the gold prices.