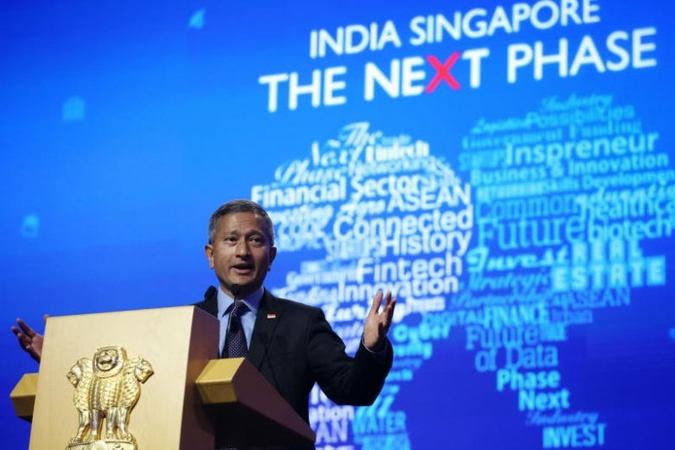 Foreign Minister Vivian Balakrishnan called the Regional Comprehensive Economic Partnership a "game changer" that had the potential to secure the prosperity of its members in the face of a pushback against trade and globalisation.ST PHOTO: JASON QUAH

SINGAPORE - Foreign Minister Vivian Balakrishnan on Monday (Sept 9) made a pitch for India to keep the faith with "the mother of all trade agreements", which is approaching the final stretch of negotiations between Asean and its six trading partners.

Meeting over the weekend in Bangkok to resolve the bottlenecks hobbling the deal, already six years in the making, trade ministers said they hoped to seal it next year.

Mr Balakrishnan called the deal a "game changer" that had the potential to secure the prosperity of its members in the face of a pushback against trade and globalisation.

"For India, China and South-east Asia, the key political question is, can we arrive at a formula that would expand a rising middle class and give their children a sense of optimism," he said, while trading views with his Indian counterpart Subrahmanyam Jaishankar at the inaugural session of the India-Singapore Business & Innovation Summit.

Pressed by the panel moderator, Ambassador-at-large Tommy Koh, to clarify whether India would join the other nations in crossing the finishing line this year, Mr Jaishankar outlined New Delhi's reservations about RCEP. India fears that the deal, which would call for a lowering of tariffs, would lead to a flood of goods from China while not assuring India of equal access to the Chinese markets, thereby widening its large trade deficit.

"The big concerns of India are that we run an enormous trade deficit with China, which we believe is a result of unfair, restricted market access... it's the Chinese protectionist policies that have created this outcome," he said.

He also raised concerns that India's forte, its trade in services, was less well enforced through regulations than the trade in goods.

The deal had the geo-strategic objective of holding the line against protectionist and unilateral policies, he agreed. Even so, it had to make economic sense, he said.

"RCEP, at the end of the day, is an economic negotiation. It has a strategic implication but the merits... have to be economic.

"You can't sign a trade agreement for its foreign policy benefits. It has to be sold for its trade benefits.

"If that was more self-evident to India, it would get clearly a much stronger resonance."

Mr Balakrishnan said Singapore, the largest foreign investor in both India and China, hoped the two Asian giants would eventually tide over their differences. But, in the meantime, RCEP presented an "enormous opportunity".

"In the next decade or two, China and India are going to be in significant trading relationship. This is something they will have to sort out. In due course, bilateral arrangements will be made," he said.

"But even as this rapprochement occurs, what we are trying to offer with RCEP is a multilateral model, a pan-regional model, the centre of gravity in the Indo-Pacific. And if we can sort out the fair rules which will promote trade and economic integration between India, China and South-east Asia, there is enormous opportunity."

He added: "I say all this without trying to trivialise or gloss over the difficulties in negotiations.

"It is worth making an effort because this will be a game changer... the mother of all trade agreements."

India can approach the deal from a position of strength, he said, noting that the Narendra Modi government, which has set the goal of doubling India's gross domestic product to US$5 trillion (S$6.9 trillion) by 2024, was re-elected with a large majority in May.

"I remain optimistic that because of the nature of the Indian economy and the transformation which Mr Modi is implementing, India can deal with this from a position of confidence," he said.

The two-day summit at the Marina Bay Sands Expo and Convention Centre coincides with Indian Prime Minister Narendra Modi completing 100 days in office after his re-election in May. In its third edition this year, it features an exhibition involving more than 80 start-ups, including 65 from India and 20 from Singapore. It aims to highlight opportunities for investors in areas such as the financial sector, infrastructure, urban development, real estate, agro-tech, food processing and skills development.

The panel also discussed the viability of the stalled capital city project of Amaravati, which was being developed in the southern Indian state of Andhra Pradesh with Singapore's help.

Work on the project has come to a standstill after the state elected a new chief minister, Mr Jagan Mohan Reddy, in May.

When asked by Professor Koh whether the project was "sick, very sick or dead", Mr Jaishankar deflected the question, calling it a decision for the state rather than the federal government.

Speaking to The Straits Times on the sidelines of the summit, the state's Finance Minister, Mr Buggana Rajendranath, said the project was not as big a deal as it was made out to be. It also did not figure high in the priorities of the agrarian state, which was struggling to build an industrial base and generate revenue.

"We don't have the money to build a city," Mr Rajendranath said.

Building works in Amaravati, India. The Andhra Pradesh government had sought Singapore's help in 2014 to develop the city as the state's new capital. The project was disrupted after the chief minister lost power in an election in May.

"Our priority is bringing up the standard of living, providing equitable development to the entire state, providing an infrastructure for creating a manufacturing base, than to build a single city," he said.

He added: "You have all of these lined up against one issue. You can have this or that."

Thus far, the involvement of Singapore firms was relatively minor, restricted to developing a small portion as a financial district, he said.

Dr P.V. Ramesh and Mr Shamsher Singh Rawat, senior officials in Mr Rajendranath’s delegation, told ST that the state was keen to pitch for investors in the new sectors selected for priority development, including a greenfield international airport, four seaports, and aquaculture and healthcare projects.

Amaravati may not be abandoned but a decision on it may yet take months, they said, adding that the state was in favour of developing a decentralised urban environment rather than concentrating all development in a single, large city.

Singapore has been involved in the project since its start in 2014 when Andhra Pradesh embarked on the venture because it lost its capital city Hyderabad to the newly created state of Telangana. Surbana Jurong submitted the city's masterplan in 2015, while a consortium of Ascendas-Singbridge and Sembcorp Development was announced in 2017 as the master developers. The city was conceived to be 10 times the size of Singapore, requiring an investment of billions of dollars.

In his remarks on the issue at the panel discussion, Mr Balakrishnan said the new state government, which has just completed 100 days in office, needed to consider the signal it was sending to investors while deciding on the fate of the project.

"What transcends such changes is the sanctity of contracts," he said.

"The governments need to consider the signal they send to investors," he added.

Singapore has remained a highly competitive economy because it provided a stable and predictable environment for investors, he said.

"This lowers the cost of business. This encourages more investments.

"So I would ask everyone to give time to the new government in Andhra Pradesh to sort out its priorities, then allow the private sector to make its own decisions, rationally, on commercial grounds."