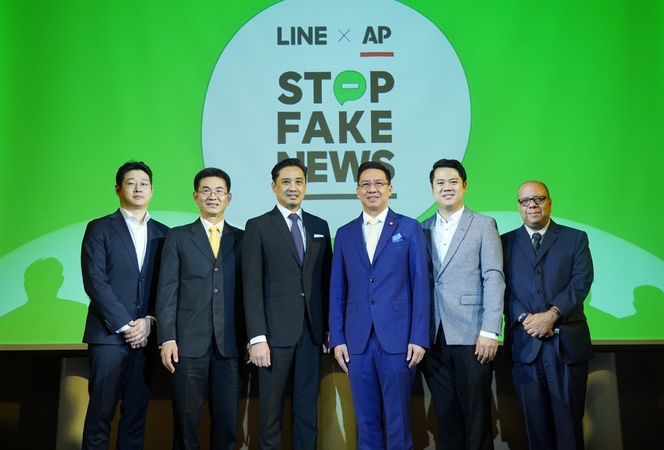 LINE Thailand, in conjunction with its parent company LINE Plus Corporation in Korea and the international news network The Associated Press (AP), held the first workshop under its "Stop Fake News” campaign in Bangkok today (September 16).

LINE TODAY and the Thai Media Fund are also supporting the campaign, which targets college-aged students and young people, particularly those studying journalism and mass communications.

The Thai workshops — held in Bangkok toady and in Khon Kaen on Thursday — are part of LINE’s "Stop Fake News” campaign, aimed at educating the public about the safe use of online and social media platforms, in an effort to prevent the spread of “fake news” and online misinformation. “Fake news” is a term for “falsehoods or fiction masked as news circulating on the internet,” according to the 2019 AP Stylebook.

LINE Thailand CEO Phichet Rerkpreecha noted the serious problems “fake news” can have on society, because anyone can access information easily in the social media age. Nevertheless, people often do not carefully check the sources of the information they receive online. As a result, they sometimes are unable to discern whether the information or news articles are reliable. The problem exacerbating when they pass them on to others.

“LINE has long been aware of the social issues caused by ‘fake news’ and worked actively to fight the problem,” said Phichet. “It’s not a problem that can just be tackled with laws. Cooperation from all sectors of Thai society is needed to prevent fake news from originating and spreading. The present government has shown how seriously it takes this issue through the establishment of the Fake News Center under the Ministry of Digital Economy and Society.”

Phichet noted that LINE TODAY is careful about the content  it carries, providing news and information from more than 160 reliable sources so users know they have information they can trust.

"As a world-class online platform, we are close to the fake news problem, so it is our responsibility to take part in tackling the ‘fake news’ crisis by raising awareness among the general public,” said Phichet. “That’s why LINE Plus Corporation in Korea initiated the "Stop Fake News’ campaign for the global community, including Thailand, with support from the AP.”

The campaign released an animated educational video that would guide viewers through the process of how to check the credibility of stories before sharing them with others. The educational video will be available in five languages: English, Thai, Bahasa Indonesia, Chinese, and Japanese.

Phichet continued: “We believe that the workshops will help young people in the field of communications and information technology to be more informed and better understand the impact of fake news. Eventually, they will be able to stop and prevent ‘fake news’. This campaign will pave the way for long-term solutions to the problem”.

The first "Stop Fake News” workshop was held in Bangkok today at Gaysorn Tower. It will be followed by a second one in Khon Kaen on September 19 at the Khonkaen International Convention & Exhibition Center. More than 400 students and lecturers in journalism and mass communication are expected to participate in the event.