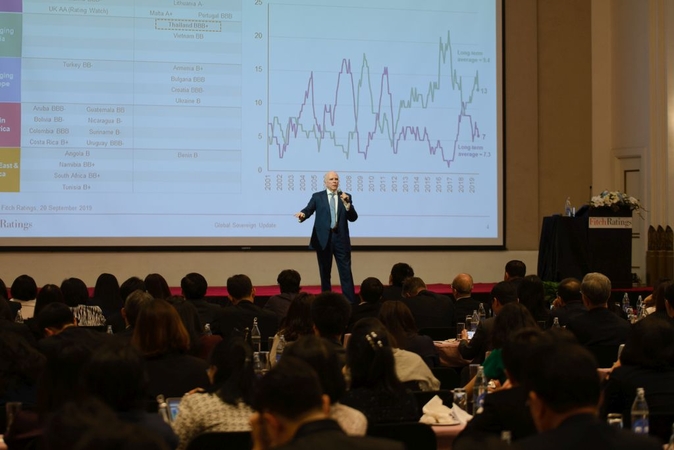 Thailand's sound economic fundamentals can cope with the challenges from global trade tensions, while the Thai banking sector is less exposed to external risks, such as a slowdown in China, relative to other Fitch-rated banks in Asia, according to Fitch Ratings' sovereign and banking analysts at its annual global risk conference in Bangkok today (October 2).

James McCormack, managing director and global head of Sovereigns at Fitch Ratings, said revision of the 'BBB+' sovereign outlook rating on Thailand to 'positive' in July 2019 was driven by Fitch's increasing confidence that lingering political risks are unlikely to derail the country's macroeconomic management.

Thailand overcame a major political hurdle earlier this year with the formation of a new civilian-led government following elections in March, and the country has maintained sound external and public finance positions for several years.

Risks to the growth outlook stem primarily from the challenging global trade environment, although this may be mitigated by the more-supportive monetary policy and infrastructure projects, which are intended to increase investment and support growth in the medium term.

Global risks centre on policy uncertainty, particularly as it affects the trade outlook, and the UK's upcoming Brexit deadline, which could result in a recession in the country and weaker growth in the euro zone.

Fitch believes widespread monetary easing by central banks cannot fully offset the slowdown in trade, and policymakers will have to turn increasingly to accommodative fiscal policies, including in countries where government debt levels are already high.

In his presentation on the banking sector, Parson Singha, senior director of Financial Institutions at Fitch Ratings (Thailand) Limited, said Thai banks were well-positioned, in terms of potential vulnerabilities and loan-loss buffers, and they were able to cope with downside stresses such as a economic slowdown in China or a property-market downturn.

However, the upside for Thai banks' financial performance may be limited in the near term due to the challenging operating environment.

A sharp slowdown in China would likely have the most impact on developed markets, such as Hong Kong and Singapore.

Meanwhile, banking sectors with high property exposures include those in developed markets, such as Australia and New Zealand, and in emerging markets such as Malaysia.

ESG factors come with some level of influence on the credit ratings of around 22 per cent of corporate issuers in the world, with the governance element accounting for more than half of affected issuers, he said, adding that emerging-market credit ratings are more often influenced by governance issues.

Financial transparency and governance structure issues relating to key-person risks, concentrated ownership and board independence are most common in Asia. Environmental and social factors have more influence on credit ratings in the developed markets than in emerging markets due to tighter regulation and stiffer penalties for violations.

Fitch Ratings (Thailand)'s annual global risk conference was attended by more than 300 executives and officials from the regulatory, investor, financial and corporate sectors. Dr Uttama Savanayana, Minister of Finance, was the guest of honour and keynote speaker at the event.