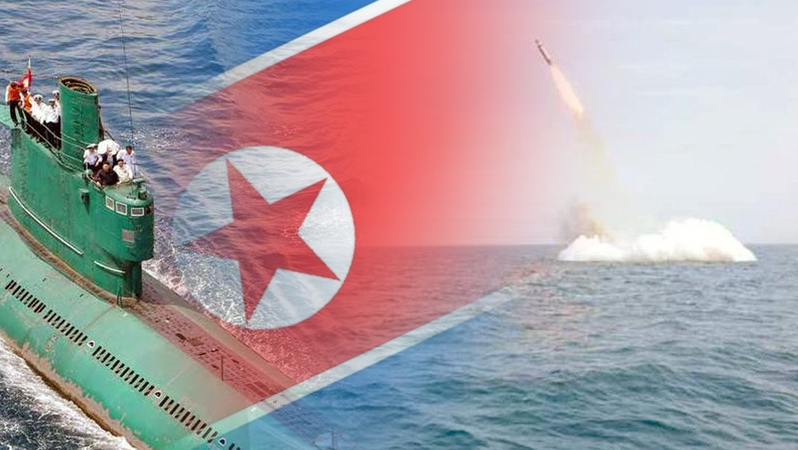 North Korea announced on Thursday it had successfully tested a new type of ballistic missile the previous day that is designed to be fired from a submarine, in a violation of UN Security Council resolutions just ahead of a resumption of negotiations with the United States over its nuclear weapons program.

The state-run Korean Central News Agency (KCNA) said the missile was launched from the waters off Wonsan Bay on North Korea’s east coast, a development that underlined the country’s continued progress in missile development and its ever-growing military threat.

The successful test-firing of the new type of submarine-launched ballistic missile (SLBM) “comes to be great significance as it ushered in a new phase in containing the outside forces’ threat to the DPRK and further bolstering its military muscle for self-defence”, KCNA said, using the initials of the country’s official name, the Democratic People's Republic of Korea.

The US State Department called on North Korea to “refrain from provocations and abide by its obligations under UN Security Council Resolutions”.

It also encouraged Pyongyang to “remain engaged in substantive and sustained negotiations to do their part to ensure peace and stability on the Korean Peninsula and achieve denuclearisation”.

A spokesman for UN Secretary General António Guterres called the test “very concerning” and urged Washington and Pyongyang to make progress toward denuclearisation in their talks.

“The launch of a ballistic missile is yet another violation of Security Council resolutions,” spokesman Stephane Dujarric said at a regular news conference in New York.

South Korea’s presidential Blue House said it “placed weight on the possibility” that the missile was launched from a submarine. But a US defence official, speaking on the condition of anonymity to describe an assessment not yet made public, said the missile appeared to have been fired from a barge that North Korean forces had towed out to sea.

South Korea’s Joint Chiefs of Staff said the missile flew 450 kilometres and reached an altitude of about 917km. Japan said the missile may have split in two, with one part landing in the waters of its exclusive economic zone, around 354km north of its Oki Islands. Prime Minister Shinzo Abe condemned and protested the test.

KCNA said the missile had been launched vertically and claimed it “had no adverse impact on the security of neighbouring countries”.

David Wright, co-director of the global security programme at the Union of Concerned Scientists, also noted that the missile was fired with a lofted trajectory.

The missile test was a reminder of North Korea’s military capabilities and an indication that it intends to drive a hard bargain in the talks, experts said. The launch can also be seen as an implicit threat -- that if Pyongyang does not get what it wants in the negotiations, it could ratchet up tensions.

KCNA said the missile was the third model in the Pukkuksong (or Pukguksong) family.

The Pukkuksong-1 is currently North Korea’s only SLBM, while the second model in the line is a land-based missile using a similar design.

Ankit Panda, a nuclear expert at the Federation of American Scientists, said the Pukkuksong-3 had been under development for a while. In July, Kim was seen inspecting a new submarine thought to be capable of firing ballistic missiles.

Firing such a missile would show that “Kim Jong-un is making progress on developing the sea leg of his nuclear forces”, Panda said. “It’s clear the sea leg isn’t just a vanity project or a prestige project, but they see it as something worth spending resources on, to improve their deterrence in a crisis.”

Lee Ho-ryung, a researcher at the Korea Institute for Defense Analyses in Seoul, said North Korea has been developing its submarine capacity for a while, so such a launch would not be a surprise.

A “submarine-launched ballistic missile poses a bigger threat than other short-range missiles North Korea displayed over the past year”, she said. “By displaying this a day after announcing plans for working-level talks, North Korea is implying that its weapons capacity will continue to be improved while negotiations are stalled.”

Panda said the timing of the launch was probably intended to increase North Korea's bargaining power in the talks, as well as to protest South Korea’s display this week of new F-35 stealth fighters obtained from the United States and Japan’s plans to deploy the Aegis Ashore missile defense system.

Negotiations between US and North Korean diplomats have been frozen since the breakdown of a summit between Trump and Kim in Hanoi in February. Another meeting between the two leaders at the demilitarised zone between the two Koreas in June was supposed to lead to a resumption of negotiations, but the stalemate has persisted until now.