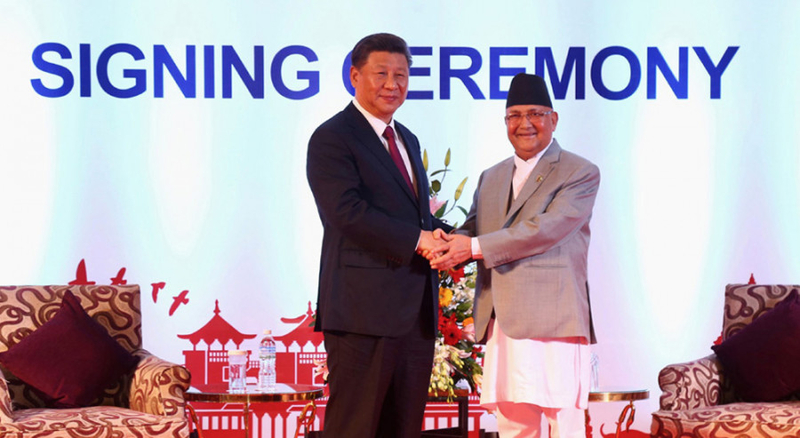 Nepal and China signed 18 memorandums of understanding and two letters of exchange on Sunday on the concluding day of Chinese President Xi Jinping's two-day state visit.

Officials from Nepal and China signed the agreements on various issues in the presence of Prime Minister KP Sharma Oli and Xi on Sunday morning.

The instruments are related to the partnership between government bodies including the ministries of home; foreign affairs; physical infrastructure and transport; agriculture and livestock development and industry, commerce and supply.

Foreign ministers from Nepal and China as well as finance, home and foreign secretaries and secretaries at related ministries and the Chinese Ambassador to Nepal Hou Yaunqi signed and exchanged the memorandums of understanding and letters of exchange.

Xi arrived in Kathmandu on Saturday in a first visit by a sitting Chinese president to Nepal in over two decades.

While addressing a banquet hosted by Bhandari in honour of Xi on Saturday evening, the Chinese president announced Rs 56 billion economic assistance for Nepal for the next two years—2020 to 2022.

Xi and the Chinese delegation departed for Beijing on Sunday afternoon.