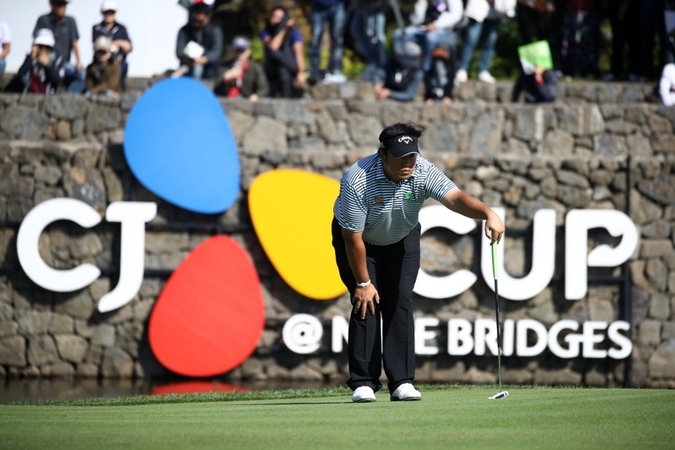 Thai star Kiradech Aphibarnrat birdied three of his closing five holes for a third straight 3-under 69 to move into tied seventh place at the US$9.75 million THE CJ CUP @ NINE BRIDGES on Saturday.

After dropping bogeys on 10 and 13 which erased his gains on the third and fourth holes, the burly Kiradech bounced back strongly to finish his round with birdies on the 14th, 15th and 18th holes, missing a putt for eagle on the last.

Kiradech’s three-day total of 9-under 207 left him six shots back of co-leaders Justin Thomas (70) and Danny Lee (68) who are three clear of Australia’s Cameron Smith (68) in Korea’s only PGA TOUR tournament.

“I don't think I'm rolling the putts well (again) today. I think I'm hitting it incredibly good. Today was the first day I feel I'm playing solid golf again. Two bogeys coming from two three putts and I missed putts inside of 10, 12 feet, maybe on five, six holes. I left a couple shots out there. And three birdies in the last five holes were good,” said Kiradech.

He tallied 32 putts with the flat stick for the second straight day and hopes he can figure out the tricky greens at The Club @ Nine Bridges on Sunday to make a title challenge. “Holing more putts is the key. The way I'm swinging it right now, I'm ready to go out and start hunting again. I don't think I'm doing anything wrong right now, so I'm just working on what I'm doing right,” said Kiradech, the first Thai to play full time on the PGA TOUR.

Kiradech is unperturbed with the six shot deficit as The Club @ Nine Bridges has yielded low scores in the past, including a 63 during the second round by Thomas.

“It depends on how I start, I think the confidence really needs to get in the game.  I would say if you hit it at the right spot, you’ll have a bunch of birdies but we have to make sure you don't make a mistake. You can't hit into the rough here as the greens are quite firm. Hopefully I will roll the ball better tomorrow, I'm not that far off,” said Kiradech.

“Obviously, you've seen Justin Thomas shoot 63 in the second round, which is just, I mean, this can happen. Par 5s are reachable, so that makes it possible.”

Countryman Jazz Janewattananond shot a 70 for T61 position on 2-over 218.