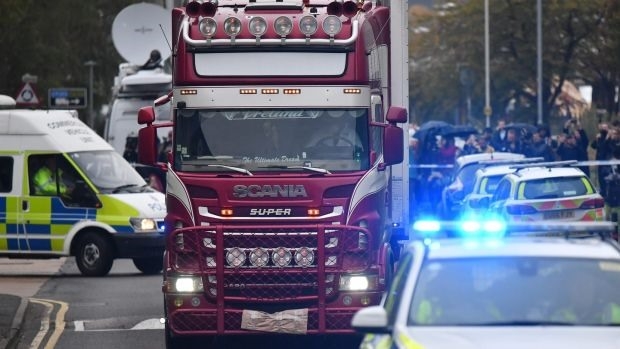 Police officers escort the lorry in which 39 dead bodies were discovered. — AFP Photo

Worried families who fear their loved ones were aboard the deadly Essex lorry can contact special hotlines to provide information to the authorities, the Việt Nam's Ministry of Foreign Affairs said on Friday.

The grim discovery of 39 dead bodies inside the truck was made on Wednesday in Essex, England. At first, police in the UK said the nationality of those killed was Chinese, but now a number of concerned families in Việt Nam fear their relatives may have been among the dead.

One 26-year-old from Hà Tĩnh Province, Phạm Thị Trà My, is reported to have sent a text message to her mother not long before she died.

Now the Ministry of Foreign Affairs has told the Embassy of Việt Nam in the UK to work closely with the UK police to define the victims’ nationalities.

The embassy said it is working closely with British agencies to speed upthe investigation process.

The Consular Department under the ministry has been assigned as a contact to co-ordinate with relevant agencies and local authorities to provide information to assist in the victim identification process.

To receive assistance in relation to the case, people can contact the Embassy of Việt Nam in the UK via its hotline for assisting overseas Vietnamese at +44 7713 181501 or Việt Nam’s general citizen protection hotline at +84981 8484 84