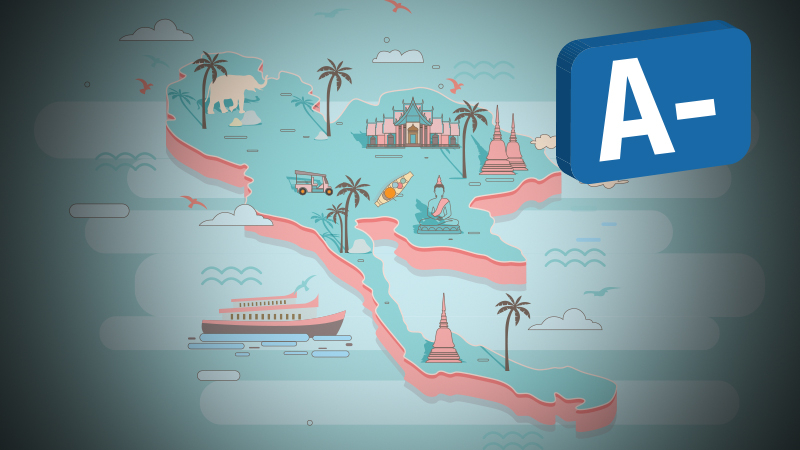 Japan's Rating and Investment Information, Inc. (R&I) on October 31 announced its upgrade of the Thailand's Foreign Currency Issuer Rating to A- from the previous BBB+.

According to its statement, Thailand's economic fundamentals are underpinned by the agglomeration of manufacturing sectors, centred on electronics/electric appliances and automobiles, through foreign direct investment. The implementation of aggressive measures for industrial development will likely continue to help maintain its mid- to long-term growth potential.

R&I believes that fiscal management will remain sound, with the Fiscal Responsibility Act in place. The current account balance has been consistently in surplus, and overall, concern over the external position is limited.

On the political front, the statement noted that the country had returned to civilian rule after a general election and was heading toward normalization, which R&I views positively.

Thailand's real gross domestic product (GDP) growth accelerated in 2017 and 2018 on the back of the buoyant global economy. However, the economy has been decelerating due to the lower contribution of exports since the latter half of 2018 stemming from the US-China trade friction, as well as the slowdown of the growth of foreign tourist numbers. This suggests that the growth rates for 2019 and 2020 may be held down temporarily.

The current government intends to push ahead with infrastructure development based on large-scale economic stimulus measures and bring in foreign investments, the statement noted, adding that eyes will be on whether the political environment remains facilitative so that the government is able to implement its envisaged economic measures.

Thanks to a recovery in trade surpluses and consistent, increasing surpluses in the services account mainly stemming from strong tourism revenues, the current account remains substantially in surplus relative to GDP. The current account surplus is expected to narrow moderately because of domestic investment that will be driven by large infrastructure projects. Supported by ample foreign reserves relative to external debt, foreign currency liquidity is of little concern.

2010 to September 2011). To strengthen a fiscal discipline framework, in April 2018 the government introduced the Fiscal Responsibility Act, which constitutes a comprehensive fiscal management policy. While a prudent fiscal management stance has already been in place as exemplified by the voluntary establishment of a debt ceiling, the government decided to reinforce the framework through the legislation. With outstanding debt staying relatively low as a percentage of GDP, there is no particular concern about funding. Fiscal risk is contained, in R&I's view.

With growth in the labour force population leveling off, development of higher value-added industries is essential for boosting economic growth toward an exit from the middle income trap. R&I positively views the current government's commitment to fostering industries from the long-term perspective through development of the Eastern Economic Corridor and other initiatives.

While restoration of civilian rule and continuity in economic measures are positive factors in evaluation of creditworthiness, solving the root causes of the political conflict, including urban-rural income disparity, is not easy. R&I will keep an eye on future political developments.