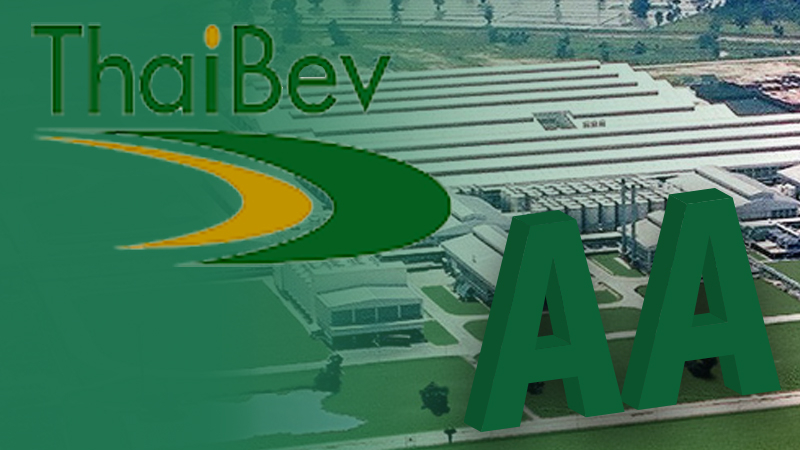 TRIS Rating has affirmed an “AA” rating for Thai Beverage PLC (ThaiBev) as a company and for its outstanding senior unsecured debentures.

“These strengths are partially offset by the surge in financial leverage in recent years, intense competition, regulatory constraints and frequent excise tax hikes in the industry,” TRIS said.

It expects ThaiBev’s domestic beverage business performance to continue improving. After a decline in domestic sales in 2018, it posted a quick recovery of 8.5 per cent year-on-year growth in the first nine months of fiscal 2019.

The growth was supported by the recovery of demand in both the alcoholic and non-alcoholic beverage segments. As a result, the company’s operating profit margin improved to 15.8 per cent in the first nine months of 2019, compared with 14.3 per cent in 2018.

TRIS believes domestic market demand will continue to grow in tandem with government spending to stimulate the economy, coupled with higher farm income. It expects ThaiBev’s domestic sales to increase by around 8 per cent in 2019 and 3 per cent in both 2020 and 2021.

It also projects ThaiBev’s operating profit margin to stay around 16 per cent over the next three years.

In the past few years, the company has made three key strategic investments – the acquisition of Grand Royal Group (GRG), the largest producer and distributor of spirits in Myanmar, Saigon Beer-Alcohol-Beverage Corporation (Sabeco), the largest beer producer in Vietnam, and KFC outlets in Thailand.

These acquisitions have added more than 30 per cent to its revenue base and earnings before interest, taxes, depreciation and amortisation. Its expansions in Vietnam and Myanmar have also helped significantly reduce its reliance on the domestic market.

Overseas revenue jumped to 28 per cent of sales in the first nine months of fiscal 2019, compared with a negligible 3 per cent in 2017.The markets in Myanmar and Vietnam are less mature and have better growth potential.

The company holds a strong position in every market where it’s active. In Thailand it is the largest beverage company, with a market share exceeding 90 per cent for spirits and nearly 40 per cent for beer, based on sales volume.

It is also the market leader in the ready-to-drink tea and drinking-water segments and is a major producer of carbonated drinks and other beverages.

Through its affiliated companies, ThaiBev extends its market coverage across Southeast Asia. Fraser and Neave Ltd has a strong position in its home markets of Malaysia and Singapore.

The rating agency expects ThaiBev’s leverage to gradually decline over the next three years. Its net debt reached a peak at Bt215.8 billion in fiscal 2018, then declined to Bt206.2 billion in the first nine months of fiscal 2019.

TRIS’ projection assumes no additional, large, debt-funded acquisitions over the next three years as the company’s management has expressed strong intention to deleverage.

The liquidity position is strong. As of June, ThaiBev had cash on hand of Bt24.1 billion. TRIS projects funds from operations to be around Bt33 billion in the next 12 months. The company has undrawn credit facilities of around Bt54 billion.

These sources of funds should be sufficient to cover the cash needed for debt service and investments over the next 12 months.

ThaiBev has long-term debt-repayment obligations of around Bt6 billion coming due during the next 12 months. As of June, its outstanding short-term obligations were Bt14 billion. The company has planned capital expenditures of approximately Bt7 billion in fiscal 2020.