New Zealand emerged as the top-ranked market in the Asia Pacific region, and second in the world behind only the United States, for its conduciveness to women’s entrepreneurship. 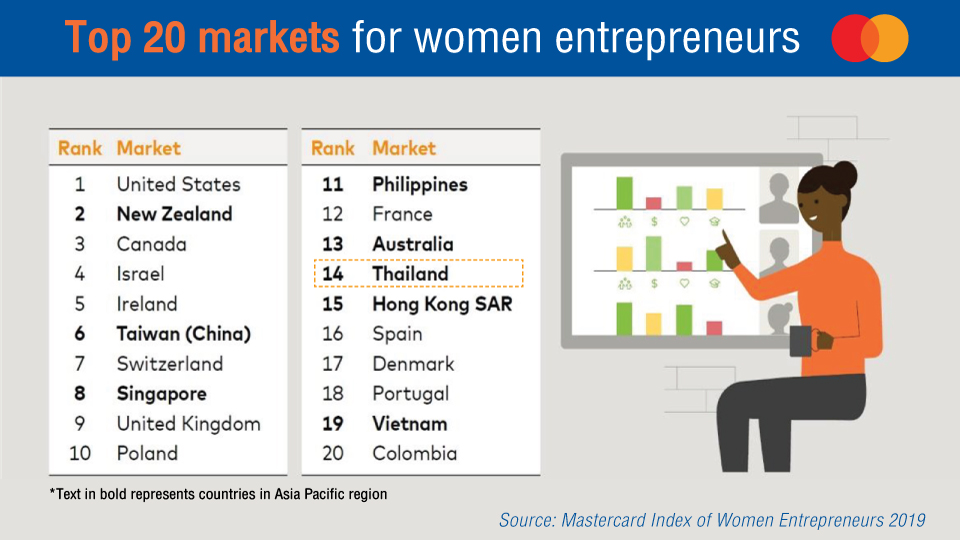 Mastercard today (November 27) released the third edition of its Mastercard Index of Women Entrepreneurs, celebrating the markets where women entrepreneurs are most likely to thrive, while sounding the alarm that there are still significant inequalities that hold us all back. 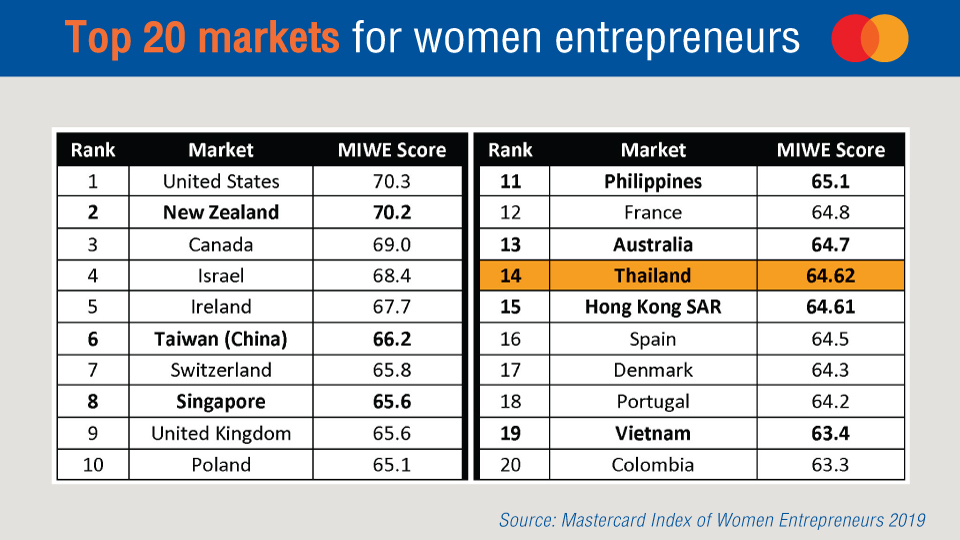 Based on publicly available data from international organisations including the International Labour Organisation, Unesco and the Global Entrepreneurship Monitor, the global Index tracks the progress and achievement of women entrepreneurs and business owners in 58 societies(representing nearly 80 per cent of the world’s female labour force) across three components: (i) Women’s Advancement Outcomes, (ii) Knowledge Assets & Financial Access, and (iii) Supporting Entrepreneurial Factors.

The results reaffirmed that women are able to make further business inroads and have higher labour force participation rates in open and vibrant markets like New Zealand, Singapore and Australia, where the support for SMEs and ease of doing business are high. Women are also able to draw from enabling resources, including access to capital, financial services and academic programmes.  Typically, these markets are also driven by social norms that deeply encourage and promote innovation, creativity, risk‐taking and success through personal perseverance, and grant women fair opportunities to rise as business leaders, gain tertiary education and to be perceived and accepted as successful entrepreneurs. Out of the 20 highest-ranking markets globally, 80 per cent are high income economies. Top 20 markets for women entrepreneurs

Women Business Owners (as percentage of Total Business Owners) is the benchmark indicator of the MIWE, which is derived from the three components outlined above. TTTTT

Of the 58 markets included in the index, eight moved up by more than five ranks year-on-year. Asia Pacific’s fast-rising markets included Indonesia (+13), Taiwan (China) (+9) and Thailand (+5) which all saw significant jumps in their rankings.

On the other end of the spectrum, for markets at the lower end of the index, women tend to be held back by lack of opportunities to assume higher-level economic roles, are marginalised by poor support for SMEs, low financial inclusion, poor opportunities for tertiary education and often restrictive and underdeveloped business and financial systems that make doing business difficult.

Importantly, societal and cultural norms also discourage them from working, being ambitious, or assuming leadership roles.

“What is clear through this research is that gender inequality continues to persist across the world, although it manifests in different ways. It isn’t a developed or developing world problem alone. Even in markets with the most promising entrepreneurial conditions, women’s business ownership hasn’t reached its full potential. This marginalisation hinders the empowerment of women socially, professionally, economically and politically – to the detriment of society as a whole. That’s why Mastercard is tackling this problem head on, all over the world, by providing the tools and networks that drive inclusive growth and put the digital economy to work for everyone, everywhere,” said Julienne Loh, executive vice president/Enterprise Partnerships, Asia Pacific, Mastercard.

“Women-owned and led businesses are strong catalysts for economic growth, improving the lives of everyone. With this study, we are shining a light on those under-represented because even today, inequality and exclusion still hold women back. At Mastercard, we believe good ideas come from everywhere. Now is the time for governments and organizations to power together to support women to advance their businesses by eradicating gender-bias and ensuring greater access to education and financial inclusion,” said Ann Cairns, Executive Vice Chairman, Mastercard.

The Mastercard Index of Women Entrepreneurs 2019 is the third report profiling the progress and achievement of women entrepreneurs/business owners across 58 societies around the world. With Angola as the newest market added to the Middle East & Africa region, the index expands its attempt to track the factors that underpin the gender gap among business owners. Representing nearly 80 per cent of the world’s female labour force, it highlights how the 58 markets differ at three levels: (i) Women’s Advancement Outcomes, (ii) Knowledge Assets & Financial Access, and (iii) Supporting Entrepreneurial Factors.

The results also shed light on which factors and conditions are the most conducive in helping to narrow the gender gap among female entrepreneurs/business owners, or the most inhibitive and disabling, thereby weighing on women’s ability to thrive in business.