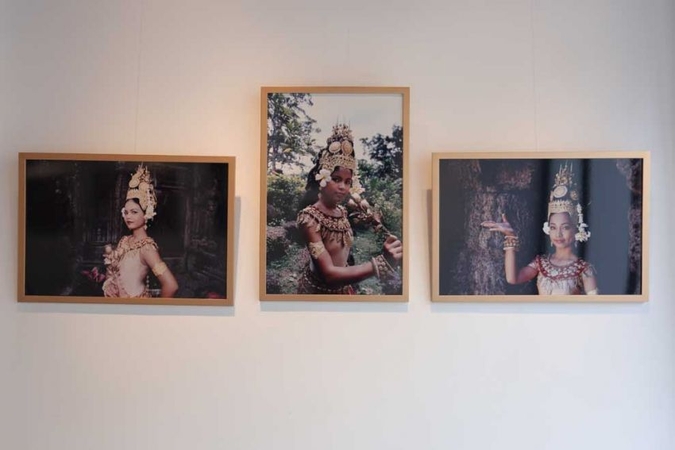 By The Phanom Penh Post/ANN

SRA’ Art Gallery is holding its new exhibition, Apsaras and Legends of Cambodia, in honour of the late Princess Norodom Buppha Devi, a staunch promoter of Khmer Arts who helped revive the traditional Apsara dance and the Royal Ballet of Cambodia. 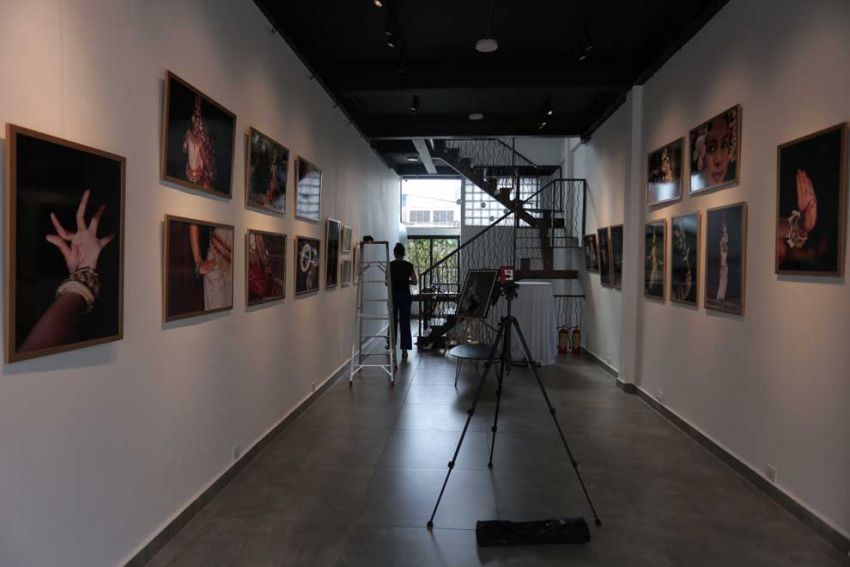 Ten paintings from Cambodian artist Khun Kolkateka and 30 photographs from German photographer Arjay Stevens will be displayed in the first exhibition of the Khmer Arts and Traditions cycle at the commercial contemporary art gallery.

After its official opening last Thursday, the exhibition will remain open to the public until January 10.

The founder of Sra’ Art Gallery, Cecile Eap, describes the Apsaras and Legends of Cambodia as an exhibition of mixed media inspired not just by the Princess, but by all of the legends of Cambodia.

On the ground floor of the gallery, artist Kolkateka’s paintings are displayed where each work represents the bridging of a variety of arenas – politics, society and culture – in the international realm toward Cambodia.

Born and raised in Phnom Penh, Kolkateka’s passion for Khmer art started at a young age while his taste for European art history and techniques were cultivated during his middle school and high school years.

“His love for Cambodia’s elaborate art style, combined with his deep interest in European art, creates a balance between the two worlds – his Kingdom and that of the West,” Eap says.

Kolkateka’s collection reflects the work of an artist with a profound connection to the rich history and culture of his country. His distinctive personal style emanates joy and peace and expresses the vibrant spirit of Cambodia’s past. “Cambodia resides in the hot spot of the cultural influences of India, China, and Europe through the French colonisation. This exhibition serves as a gateway to Cambodia’s myths and folktales, and Khmer lifestyle and aesthetics,” says Eap.

One of the artist’s most captivating pieces is entitled Choices – a painting which depicts a portrait of the late Princess in her youth. “The painting, inspired by Her Royal Highness Norodom Buppha Devi, depicts an Apsara gracefully holding a lotus flower. It is about making choices, which is a part of life. Some may choose to embrace what is and let go of what was, while some may choose the opposite,” explains Eap.

Eap recounts: “After the forced standstill of all kinds of arts during the nightmare of the Khmer Rouge period from 1975-79, only 10 per cent of the dancers survived the massacres. But a handful of great masters have created a revival in that classical dance form.”

Stevens’ interest in Southeast Asia dates back to his first visit to the region in 1996. This would be followed by thousands of photographs of the Kingdom taken by him in the past two decades.

The exhibited photographs of Stevens showcase the portraits he took of the late Princess Buppha Devi.

“The Princess was giving a press conference about the new programme of the Royal Ballet of Cambodia in December 2017. She was sitting in a side room and Stevens asked her if he could take a photograph. She has known him for many years so she was very relaxed [while her photograph was being taken],” notes Eap.

Eap says the Princess also requested her portrait to be taken during an exhibition of Rodin’s drawings at the National Museum of Cambodia. “She asked him to deliver the print to the Royal Palace but ended up delivering them personally to her home. He believes the picture is still there with her family,” Eap says.

Another notable work of Stevens is his photograph book, which represents a parallelism of ancient Angkor bas-reliefs and the contemporary Apsara dancers of today, where today’s dancers have started injecting subtle modern changes in the costumes and dance forms of Apsarases.

Because of the legacy that Princess Buppha Devi left in Khmer art, Eap feels like this is the right time to host an art exhibition not just to pay homage to the late princess but also to commemorate the origin of Khmer arts and its influence over the works of artists in the Kingdom today.

“We wanted to be able to showcase the lasting influence that the late Princess has had on Cambodian culture, and have it in a space accessible to everyone,” she adds.

As a commercial art gallery, all the exhibited artworks are for sale, with the profits to be shared by the promoting artists and the gallery.

The Apsaras and Legends of Cambodia exhibition will be open until January 10 at Sra’Art Gallery located at No 7/9E0, Sothearos Boulevard, across the park from the National Museum and the Royal Palace, between Street 178 and Wat Ounaloum.