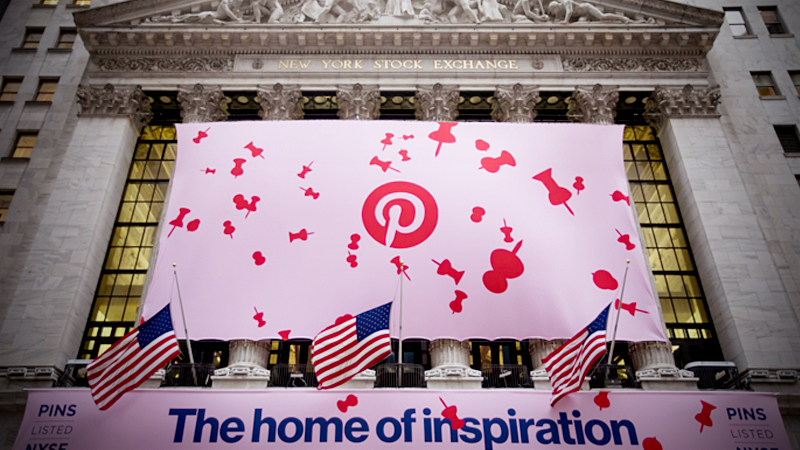 Banners display Pinterest signs in font of the New York Stock Exchange during the company's initial public offering in New York on April 18, 2019. MUST CREDIT: Bloomberg

Pinterest Inc. has shed more than a quarter of its market value since the end of October, falling below its April initial public offering price.

Yet many market watchers still think the social-media company has the right formula to boost advertising revenue and win over investors.

Almost half of Wall Street analysts tracked by Bloomberg recommend buying the stock and hedge funds now account for 22% of shareholders, up from 16% in August, according to data compiled by Bloomberg.

Bulls say that Pinterest's online site is a marketer's goldmine, and the only issue the company faces is figuring out how to better cash in on it.

"It's caught on something really unique," Wedbush analyst Ygal Arounian, who rates the stock outperform, said in a recent phone interview. "They just need to be able to execute and put all the pieces together in order to capture that opportunity."

Shares in the unprofitable company have fallen 49% since an August high in an environment that has seen investors pressuring management teams for profitability after years of pushing growth at all costs.

San Francisco-based Pinterest, with a market value of $10.3 billion, operates a site with more than 320 million monthly active users spread across the world.

The site allows users to scroll through a feed of "pins" that contain images or videos and links and descriptions. Users can then save the pins to customizable boards to curate ideas for anything from vacation plans to dinner recipes or holiday shopping lists.

Pinterest's pitch for marketers is that, while advertisements often act as a distraction on other sites, more users come to its site with an intent to make a purchase. That makes advertisements an inherent part of the Pinterest user's experience, rather than something negative, the company said in its prospectus.

Analysts who agree with that premise say the stock is attractive even after a third-quarter revenue miss led to a 17% plunge in one day. The company is expected to report $1.11 billion in revenue for 2019, up 47% from the year before, followed by more than 30% growth in each of the next two years.

The company is "heads-down focused" on improving its ad tech stack and gain wallet share from digital media peers in 2020, Wedbush's Arounian said in a written report Friday. There's a lot of work to do, but "minor wins can go a long way" to better-than-expected results this year with the bar now reset significantly lower, he wrote.

Pinterest is developing digital advertisement tools to give marketers insight into their audience, adding features that allow users to shop directly from the site and expanding their advertiser base to more small- and mid-sized businesses.

"The stronger that ad tech toolset is and the more things they could address for advertisers, the more money advertisers will be willing to spend on the platform," Arounian said in the phone interview. "That could help re-accelerate growth."

Analysts who are more cautious raise a variety of concerns. They note slowing growth in Pinterest's more lucrative U.S. user base and say the company won't win over investors until it can consistently deliver quarterly gains in line with Street expectations.

"Given the growth rate of users in the U.S. and the level of engagement that the users in U.S. exhibit, it makes me wonder how large can this company become over the longer-term," Kulkarni said in a phone interview. "It remains unprofitable right now, so I'm still on the sidelines."

While there's substantial upside potential in the faster-growing international user base, that won't support the stock until the company can reduce the revenue gap with U.S. users, he said.

The average revenue per international user is about one-twentieth that for a U.S. user, Kulkarni said, while that number is more like a seventh or eighth for other sites such as Facebook.

Shares of Pinterest fell as much as 1.9% in early trading Friday.

Still, some of the disappointment with the company's progress might come from investors setting a high bar, said D.A. Davidson analyst Tom Forte, who upgraded his rating on the stock to buy after the third-quarter earnings report.

"When people look at Pinterest through the lens that they're unicorns, then I think it's a victim of high expectations," Forte said. "As a long-term follower of both e-commerce and social networking companies, I've been pleased by their initial performance."

Pinterest is expected to report fourth-quarter results in mid-February.