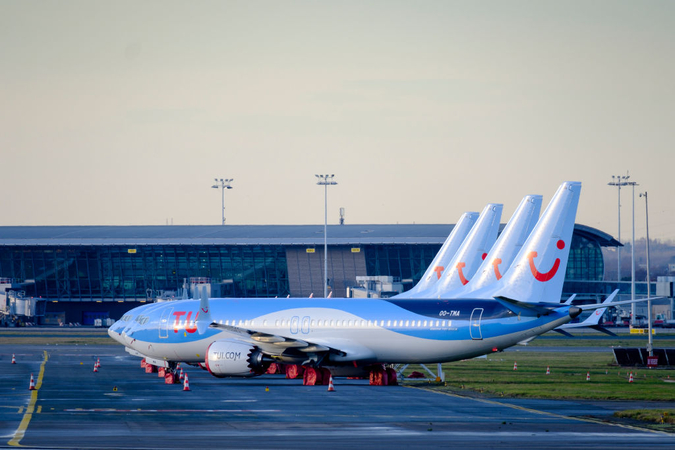 Boeing's departing CEO leaves company with $62 million amid 737 Max supplier layoffs. Boeing's outgoing chief executive, who was terminated last month for his handling of the 737 Max crisis, will exit the company with more than $62 million, the company said in a filing on Friday.

The airplane manufacturer said Dennis Muilenburg forfeited a severance package worth $14.6 million. However, he is contractually obligated to receive equity and pension benefits valued at $62.2 million, the company said. In addition, Muilenburg also retains stock options currently worth about $18.5 million.

About half of Spirit's annual revenue comes from supplying parts for the Max, which has been grounded for 10 months following two fatal crashes. In December, Boeing announced it would indefinitely halt production of the Max beginning in January.

The firing of Muilenburg, who had worked for Boeing for more than three decades, was a desperate attempt by the company to win back the trust of regulators and the public after crashes of its 737 Max aircraft led to the deaths of 346 people and accusations that Boeing had misled regulators and its customers.

His successor as CEO, David Calhoun, stands to receive a compensation package valued at $28 million, including a long-term incentive award of $7 million if he reaches a number of milestones, including the "full safe return to service" of the 737 Max, Boeing said on Friday.

The company also said Kevin McAllister, an executive fired last year after a rocky tenure overseeing the commercial plane division, will receive a lump sum of $14.75 million to compensate him for a pension he forfeited when he left General Electric in 2016.

The rich compensation of Boeing's executives contrasts with the economic challenges now facing rank-and-file workers affected by the 737 Max grounding.

Spirit said in a news release that Boeing has not told it how long the production suspension will last, or given it any information about what future production rates might look like. Boeing, in turn, is waiting for word from the Federal Aviation Administration on when the planes will be cleared to fly again.

"The difficult decision announced today is a necessary step given the uncertainty related to both the timing for resuming 737 MAX production and the overall production levels that can be expected following the production suspension," Spirit AeroSystems president and chief executive Tom Gentile said in a statement.

The company expects to conduct further layoffs "later this month" at two factories in Oklahoma. More layoffs could follow after that, the company warned.

Regulators have concluded that equipment flaws played a role in a pair of deadly plane crashes of the 737 Max that killed 346 people in Indonesia and Ethiopia. For more than a year, Boeing has been working on a set of fixes designed to make the plane safer. But the timeline for clearing the plane to fly again has continually been pushed back as more technical problems were discovered.

The Spirit layoffs are the most significant job market impact yet from more than a year of upheaval in Boeing's commercial airplanes division. The engineers, machinists and other tradesmen who work on Boeing's assembly lines have been somewhat insulated from the turmoil because Boeing kept its production line open throughout the extended grounding, hoping the FAA would quickly deem the planes flightworthy.

It wasn't until December that the Chicago-based aerospace giant announced it would stop producing the 737 Max in January.

Boeing still does not anticipate any layoffs or furloughs, a company spokesman said Friday. But hundreds of suppliers spread across the U.S. have no such assurance. Moody's ratings agency identified 24 companies with varying levels of exposure to the crisis, including General Electric, Honeywell and numerous specialized providers.

"Boeing's late-December directive to cease deliveries changed everything," Moody's analysts wrote in a note to investors.

Boeing has described its production halt as "the least disruptive decision to maintaining long-term production system and supply chain health," and pledged to work with suppliers to lessen the impact when possible.

"We regret the impact this has had on Spirit AeroSystems," a Boeing spokesman said Friday. "We remain focused on safety and quality as we assess our production needs, and are working with all of our suppliers to ensure production system stability to support the 737 MAX return to service."

A representative from the International Association of Machinists, a union that represents Spirit workers in Wichita, pledged to look for ways to lesson the impact on workers.

"Machinists members and their families in this community have some tough decisions in front of them," Cornell Beard, president and directing business representative of the union's Wichita district, said in an email.

Rep. Rick Larsen, D-Wash., chairman of an aviation subcommittee and whose district includes a major Boeing factory, said Spirit's announcement took the disruption from the continued grounding to another level.

"It's getting to the point where it's not just a delay, or produce and put pieces aside until the thing gets built, now it's really starting to attack people in terms of making them move or just totally laying them off," he said. "That's frustrating, it disheartening, it's disconcerting."