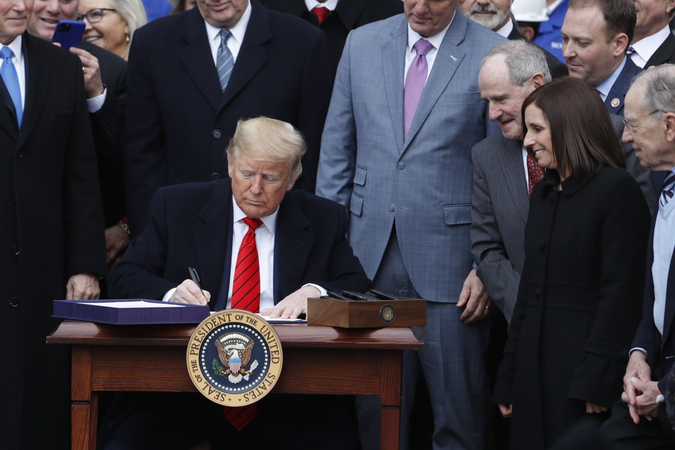 President Donald Trump signs the U.S.-Mexico-Canada Agreement (USMCA) on the South Lawn of the White House in Washington on Jan. 29, 2020. MUST CREDIT: Bloomberg photo by Andrew Harrer.

President Donald Trump signed into law a new trade pact with Canada and Mexico on Wednesday, sealing a political victory that will help neutralize Democratic attacks on his economic record.

The U.S.-Mexico-Canada Agreement, or USMCA, delivers on one of Trump's core campaign promises: to replace the Clinton-era North American Free Trade agreement that the president said has drained the U.S. of jobs.

"We are finally ending the NAFTA nightmare," Trump said Wednesday at a signing ceremony on the White House South Lawn. He then read through an extensive list of Republican lawmakers, thanking them for their help passing the deal.

The trade accord marks a rare moment of bipartisanship, but the two sides aren't sharing the glory. The White House attendance list for the event included 71 Republican lawmakers but no Democrats, who say they weren't invited. Rep. Collin Peterson, the only remaining Democrat to vote against both articles of impeachment against Trump, said through a spokesman that he was invited but couldn't attend. A White House spokesman didn't immediately respond to questions on the invitations.

Democrats have taken aim at Trump's economic policies -- including tax cuts that benefited corporations and the wealthy -- but attacking his approach to trade has proved more complicated as they compete for votes in swing states that have seen manufacturing jobs disappear.

Trump is scheduled to travel Thursday to Michigan and Iowa -- where he's expected to tout the agreement just as Democrats try to win over voters in next week's Iowa caucuses.

The White House was able to garner bipartisan support for the USMCA by adding labor safeguards and altering protections for drug patents. The pact provides expanded access for U.S. agricultural exports, new rules of origin for auto parts and additional protections for internet companies.

White House aides argue that the deal shows that Trump is continuing to get work done despite the ongoing Senate impeachment trial over his efforts to pressure Ukraine to investigate former Vice President Joe Biden, a chief 2020 rival for the White House.

"He's talked about USMCA, and he talked about the pro-growth initiatives and the economy that has boomed under him. So he keeps working -- that's fine," White House Press Secretary Stephanie Grisham said in an interview with Fox News last Friday. "They'll continue to scream impeachment -- that's fine."

The new trade provisions are projected to add about 0.35% to the economy after six years. But the accord's passage has had a more immediate effect on investors, easing concerns that Trump could disrupt the economy by pulling out of Nafta without a new deal in place.

Since Dec. 10 -- when House Speaker Nancy Pelosi announced that she had struck a deal with the White House to pass the USMCA -- the S&P 500 Index has gained about 4.6% and the Dow Jones Industrial Average has improved more than 3%. Markets were also bolstered during that period by a "phase one" trade deal with China.

Speaking before the signing, Pelosi said Democrats only agreed to support the deal after the White House caved to their demands for greater protections for American workers and the environment.

House Ways and Means Chairman Richard Neal, D-Mass., said "the only reason the president is having the signing is because of the work House Democrats" did to improve labor and environmental protections.

A record 56% of Americans approve of Trump's handling of the economy, according to a Washington Post and ABC News poll released this week. That's a 10 percentage point improvement from September. And optimism about the economy appears to be off-setting the political damage from impeachment. The president's overall approval rating matched his record high of 44% in the same survey.At the same time, just 5% of Americans say they disapprove of the USMCA, according to a Monmouth University poll released Tuesday.

Those trends -- along with bipartisan congressional support for the pact -- have effectively made USMCA a non-issue in the Democratic primaries.

Sen. Bernie Sanders of Vermont was the only Democratic presidential candidate to oppose the deal. He said it was an improvement over NAFTA but fell short of adequately protecting American jobs: "It is not going to stop outsourcing, it is not going to stop corporations from moving to Mexico."

Sen. Elizabeth Warren, a Massachusetts Democrat, initially joined Sanders in criticizing the deal. During a 2018 speech on foreign policy at American University in Washington, she said the agreement, as written, wouldn't halt outsourcing, raise wages or create jobs. But in January, she announced she would vote for it. Her campaign said the revised deal dropped a provision that would make it harder to bring down prescription drug prices, and offered stronger labor standards and more certainty for farmers.

Sen. Amy Klobuchar of Minnesota, who is running as a centrist alternative to the progressive Sanders, said in December she would vote for the pact. A day later, her moderate rival, Joe Biden, joined in support, emphasizing the elimination of loopholes for drug companies and strengthening enforcement for labor and environmental standards.

"What I've seen change is that the vast majority of the labor movement supported it," Biden told reporters in Los Angeles.

Trump is looking to press his advantage on the campaign trail Thursday. The president will speak first at a Michigan auto parts facility in Macomb County, where the largest employers are three major automakers -- General Motors, Fiat Chrysler Automobiles and Ford. During Trump's last visit to Michigan in December, he touted USMCA as "great for the automobile business."

Later Thursday, the president will head to Iowa before that state's first-in-the-nation presidential caucuses. He is expected to tout the trade deal's benefits for farmers in the region.

While companies across the country could benefit from the pact, many of the advantages appear clustered in swing states that could prove pivotal in November's presidential election.

Stricter rules for auto manufacturing are intended to bolster production in the U.S. as well as the use of American steel and aluminum, which could help states including Michigan and Pennsylvania.

According to the administration, the deal would create 76,000 auto jobs and result in $34 billion in new automotive manufacturing investments. It also opens Canada's market to U.S. dairy producers, an important issue for Wisconsin, and is expected to create 176,000 new jobs.

The president's victory tour begins with Wednesday's ceremony at the White House, but his signature won't finalize the agreement. Canada still must ratify the deal, and Prime Minister Justin Trudeau -- who lost his parliamentary majority in October elections -- may need to broker deals with his political rivals to ensure passage.