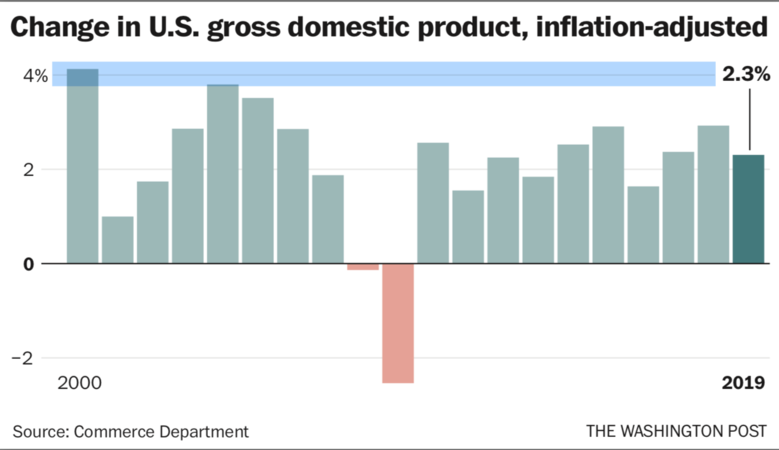 WASHINGTON - The U.S. economy grew 2.3 percent in 2019, a solid pace that was boosted by strong consumer and government spending but fell short of President Donald Trump's promise to deliver at least 3 percent growth.

Last year's growth was the weakest since Trump took office, according to Commerce Department data released Thursday, as Trump's escalating trade war with China triggered a major pullback in business spending and investment. From April through December, business investment contracted as corporate leaders preferred to sit on cash or return it to investors instead of using it to build new factories or buy equipment.

The falloff in growth - from 2.9 percent in 2018 to a more typical pace in 2019 - suggests that the stimulus from the tax cuts is wearing off and the trade war is cancelling out many of its benefits. The tax cuts came with a hefty price tag that many Republicans hoped would be offset by stronger growth for years.

But last year's growth also shows the economy's resilience, as it rebounded from recession fears in August to close out the year on solid footing thanks largely to American consumers.

Economists predict the U.S. economy will cool further in 2020, with growth coming in around 2 percent, but few anticipate a recession. The big question mark is whether businesses will start spending again now that Trump has paused his trade battle with China.

If companies begin deploying more cash and investing, growth could pick up and return closer to 2018′s levels. But an increasing number of forecasters say growth could slide further thanks to headline-making head winds, such as the production stoppage at Boeing and the fast-spreading coronavirus in China.

"You can see the sugar high in 2018 in consumption and business investment that has gone away in 2019," said Constance Hunter, chief economist at KPMG. "We don't see a corporate investment rebound in 2020. It's going to be a very sluggish year."

Trump and his fellow Republicans have portrayed the U.S. economy's performance as "unprecedented," "historic" and in the "fast lane" after the GOP tax cuts. Many economists paint a different picture, though, describing the economy as slightly above potential.

"I think we'll see a big pickup in growth in the spring, if not the winter," Larry Kudlow, head of the National Economic Council, said on Fox Business. "It's a fundamentally healthy economy," he said, touting the 3.5 percent unemployment rate and "tremendous wage gains."

Last year, Kudlow offered a similar prediction that did not come to fruition. Growth was 2.1 percent in the final three months of the year, slightly better than many economists expected but below this expansion's 2.3 percent average.

American consumers continue to drive the U.S. economy. Numerous polls and surveys show consumer confidence remains high. Americans believe that it is easy to get a job and that their incomes are likely to stay the same or improve in the coming months.

Government spending increased markedly during the Trump presidency, boosting economic growth. The deficit - or gap between spending and tax revenue - neared $1 trillion in 2019, an unprecedented level during good economic times when there is not an all-consuming war effort underway. Trump's tax cuts and additional funding for the military and domestic programs have pushed the gap wider.

Despite the additional government stimulus, Trump has yet to achieve a year of the 3 percent growth he promised before taking office.

Trump repeatedly has blamed the Federal Reserve for the shortfall, but most economists say Trump's escalating trade war and economic weakness abroad dragged down growth last year. The ongoing fallout at Boeing after the two 737 Max plane crashes and the General Motors strike that idled production at GM factories for much of October also dampened growth. Boeing is usually the largest U.S. exporter, but orders dried up after the tragedies.

"The United States is by far the strongest economic power in the world," Trump said in a speech last week at the World Economic Forum in Davos, Switzerland. "It's despite the fact that the Fed has raised rates too fast and lowered them too slowly."

Trump frequently boasts about his stewardship over the economy. The growth during his tenure has exceeded the average in the first and second terms of Presidents George W. Bush and Barack Obama, but it is not unprecedented. Presidents Ronald Reagan and Bill Clinton oversaw faster expansions.

Economists caution against giving presidents too much credit for the economy, but surveys show voters often feel otherwise. Late last year, a Washington Post-ABC News poll found 44 percent of Americans said the economy had improved under Trump, and among that group, nearly 4 in 5 said he deserves at least a good amount of the credit.

When the president cites the economy's strength, he often references stock market gains. Last year, the widely watched Standard & Poor's 500-stock index soared nearly 29 percent, helping boost the fortunes of the roughly half of Americans who have some money in equities. But many economists note a disconnect between a surging stock market and a slowing, unspectacular economy.

Business confidence plummeted over the summer as Trump escalated his trade war with China and threatened to hit Mexico with extensive tariffs. Business investment shrank for three consecutive quarters last year to end 2019.

"I don't think it's within the ability of this president to really relieve uncertainty all that much," said Vincent Reinhart, chief economist at investment firm Mellon. "Immediately after completing the Phase One trade deal with China, the president rattled the cage by threatening Europe with auto tariffs."

Trump's tax cuts that took effect in 2018 gave businesses the biggest reduction in their tax bills in U.S. history. The vast majority of Americans also paid less in taxes. But most economists say the cuts' benefits were heavily curtailed by Trump's trade war.

"The tax cuts likely did provide some boost to consumer spending, but that boost was temporary. Any benefits have been overshadowed by the headwinds come from trade policy uncertainty," said Matthew Luzzetti, chief U.S. economist at Deutsche Bank.

Trump had said the tax cuts would lure factories back to the United States, but business investment in structures like warehouses and buildings fell more than 10 percent last year.

Only investment in intellectual property and residential housing rose. For all the insults Trump lobs at the Fed, Reinhart, the economist at Mellon, points out that spending on housing and home construction went up in the second half of the year after the central bank cut interest rates. If the Fed had not acted, growth would likely have been even slower.

Job growth is expected to cool further this year as businesses struggle to find workers with the skills they need. Typically wages would surge in such a tight labor market, but earnings growth actually slowed slightly last year. For now, many Americans say it is still easy to find a job, but there are early signs companies are taking down job postings and demand has started to decline.

Labor Department data show no increase in corporate layoffs through November, though headwinds loom -- this week, industrial heavyweight 3M announced it would cut about 1,500 jobs worldwide, and key Boeing suppliers have announced cuts as well. The manufacturing sector was in a recession in 2019, but that pain has not spread to the service sector.

"With the economy as stable as it is, it would take a very large shock indeed to materially alter the economy's basic trajectory," said Eric Winograd, a senior economist at AllianceBernstein, in a note to clients.