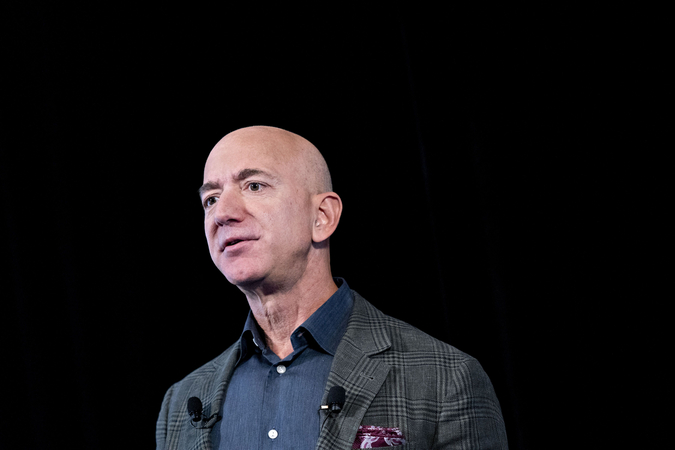 Amazon chief executive Jeff Bezos rebuked a White House adviser on Thursday with an Instagram post that included a "Seinfeld" meme, the latest twist in an increasingly personal clash between the e-commerce giant and a key Trump administration official.

Bezos's social media post appeared to be a direct attack at White House trade and manufacturing adviser Peter Navarro. In an article The Washington Post published Tuesday, Navarro alleged that the Amazon founder had backed out of a promise to meet in person, saying he was instead offered a meeting with other senior executives. Navarro told The Post he wanted to speak with Bezos about ways to prevent counterfeiters from using the e-commerce platform to sell their goods. (Bezos owns The Washington Post.)

In his Instagram post Wednesday afternoon, Bezos appeared to accuse Navarro of ambushing him at the Alfalfa Club dinner on Jan. 25 and also calling his colleagues at Amazon "minions." He also asked his social media followers how he should have handled being confronted. And in a sign that tensions between the two are escalating quickly, Navarro responded to the Instagram post almost immediately, calling Bezos's message a "wonderfully banal passive aggressive post."

Navarro had said he approached Bezos at the dinner to discuss counterfeiting issues related to Amazon. According to Navarro, Bezos agreed to meet later to discuss the issue.

In his Instagram post, Bezos didn't exactly clarify what happened. Instead, he presented the encounter as a hypothetical scenario.

"Let's say you're at a big cocktail party and someone you don't know comes up to you while you're talking to your dad and girlfriend and asks for a meeting. Let's say this person is the kind of person who actually uses the word 'minions' to describe the people who work for you," Bezos wrote.

"How do you respond: A) Yes, I'll definitely meet with you. B) No, I won't meet with you. C) Tell you what. Call so and so and they'll work something out. D) Quietly resolve to become a shut-in. E) Something else (fill in the blank)."

Bezos offered to give a button inspired by the sitcom "Seinfeld" that says "Serenity Now!" to whoever came up with the best response. "Serenity Now" is what one of the "Seinfeld" characters would say when he was starting to become very angry and wanted to calm himself and keep his blood pressure down.

Navarro responded to the Instagram post by telling The Hill: "A wonderfully banal passive aggressive post from the would-be author of 'Zen and the Art of Counterfeit Trafficking.' "

Navarro confirmed to The Post that he made the statement. When asked whether Bezos would ultimately meet with Navarro, an Amazon spokeswoman reiterated an earlier statement saying senior executives have met with administration officials, including Navarro, on "multiple occasions" to discuss counterfeits. The company, she said, is "eager to continue this collaboration and will make our executives available to meet as often as necessary to effectively address this issue."

Navarro also said in an email to The Post: "How about the choice Jeff Bezos actually made when I spoke with him on January 28: F) 'Peter, call my second-in-command Jay Carney and have him set up the meeting.' That's exactly what I did and now Bezos in hiding is simply trivializing one of the most important issues facing American consumers."

Other figures within the administration have more amicable relationships with Bezos. A few hours after the Navarro incident at the Alfalfa Club, Bezos hosted President Donald Trump's daughter Ivanka, her husband, Jared Kushner, and top Trump adviser Kellyanne Conway for a party at his house in Washington.

The tussle comes a few weeks after the Trump administration said it would crack down more aggressively on counterfeit imports by holding third-party platforms such as Amazon accountable for knockoffs sold on their sites. Counterfeit goods have become a growing problem for e-commerce sites as they allow third-party merchants to list and sell products with little oversight.