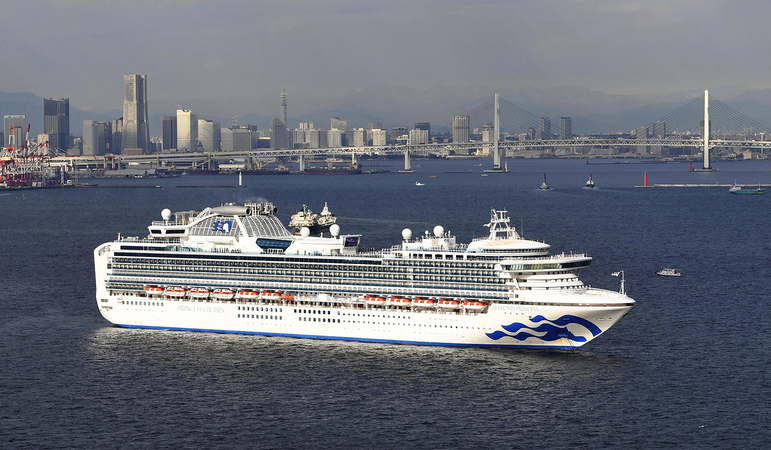 TOKYO - Another 41 people have tested positive for coronavirus on the quarantined Diamond Princess cruise ship, bringing to 61 the number of people aboard who have been diagnosed with the virus, Japan's health minister said Friday.

The latest test results came from the final 171 tests carried out on people aboard. A total of 273 people on the ship were tested for the virus, out of 3,711 passengers and crew. The tests were carried out on people deemed at highest risk of having caught the virus, either because they showed symptoms or because they had mixed with a passenger from Hong Kong who is believed to have carried the virus onto the ship.

Japan's Health Minister Katsunobu Kato said Thursday that the quarantine would not "in principle" be extended, but he has not ruled out testing more people.

The people who tested positive will be taken to local hospitals, he said Friday.

Speaking about the people still aboard, he said: "We will give the highest priority to ensuring their health, and in order to prevent the spread of infection, we will implement measures thoroughly."

Chinese health officials said Friday morning that they had confirmed more than 31,000 cases of the novel coronavirus, including 16 on the self-governing island of Taiwan. More than 4,800 of the cases were considered severe.

The death toll rose to more than 630, up from about 560 the previous day. The deaths remain almost entirely confined to China, with the exception of a man who died in the Philippines. That man, 44, was a resident of Wuhan in Hubei province, the epicenter of the outbreak.

Japanese Prime Minister Shinzo Abe told lawmakers that there was no discussion of canceling the 2020 Summer Olympics, which will be held in Tokyo in a few months, despite the outbreak.

"In terms of whether to hold the Tokyo Games, I'd like to make it clear that there have been no talks or plans being considered between organizers and the International Olympic Committee since the World Health Organization declared an emergency," Abe told parliament Thursday, Kyodo News agency reported.

The reassurance comes as the coronavirus spreads, causing travel chaos across the region. Japan has 45 confirmed cases of the virus.

The Olympic torch is due to arrive in the country's northern Miyagi prefecture in six weeks, with the games themselves set to begin July 24. The virus has already disrupted some Olympic qualifiers, causing officials to worry.

"We might possibly even see another outbreak in the middle of the Olympics," Hitoshi Oshitani, a virology professor at Tohoku University's School of Medicine, said in an interview last week. "We have to be well prepared for that possibility. It is not something unthinkable."

Each installation pairs with one of the 11 airports where flights from China have been directed to land because of the coronavirus outbreak. As many as 20 people could stay at each installation during their mandatory 14-day quarantine, DOD said in a statement.

HHS will bring any evacuee who is ill to a civilian hospital and ensure that they do not go to a DOD facility. The Defense Department also plans to provide office space for HHS employees through Feb. 22.

The World Health Organization will convene a global research and innovation forum on Tuesday and Wednesday to coordinate international responses for containing and combating the outbreak.

"The aim is to fast-track the development of effective diagnostic tests, vaccines and medicines," WHO Director General Tedros Adhanom Ghebreyesus told reporters Thursday in Geneva. "One of the key challenges is coordinating research funds to support key priorities."

Tedros said scientists from all over the world, including China, would attend the conference both in person and by a remote video connection. The WHO is based in Geneva.

"A lot of donors want to help, but we need to direct them to support agreed priorities, rather than going off in different directions," Tedros said of the forum's intent. "I have said we need to be led by facts, not fears, and science, not rumors. And that's exactly what we're doing. We're letting science lead."

The Gates Foundation has pledged $100 million to stop the quickly spreading coronavirus.

Meanwhile, scientists are wrestling with the sticky question of what to call the novel coronavirus. Right now, it is officially "2019 nCoV," which is inelegant at best and does little to describe either the virus or the resulting disease in humans.

But the virus could acquire a new, more easily communicated name in the coming days. It could be a variant of an existing name, SARS, which stands for severe acute respiratory syndrome, according to two scientists involved in the decision.

The SARS virus emerged in southern China in 2002 and killed more than 700 people before it was contained. The new virus is genetically similar. Both are coronaviruses of the type found in bats.

"They likely had a common ancestor in the bat population," said Stanley Perlman, a virologist at the University of Iowa who is part of the Coronavirus Study Group, a subset of the International Committee on the Taxonomy of Viruses.

"It's like a cousin. They probably started from a common ancestor some years ago in bats, and they mutated and evolved, and that's what you have now," he said.

He said the committee favors including SARS in the name of the new virus.

"It's close to SARS. But it's not SARS. You could say a SARS-like virus, slash Wuhan, slash 2019," he said. "From a taxonomic point of view, it's so related to the previous virus, it needs to be included in its name."

Of the roughly 30,000 nucleotides (or "letters") in the virus genome, about 6,400 are different, according to Benjamin Neuman, a virologist at Texas A&M at Texarkana who is also in the Coronavirus Study Group.

A Chinese doctor who was silenced by police for trying to share news about the coronavirus long before Chinese health authorities disclosed its full threat died Thursday from the disease, his friends and colleagues said.

Li Wenliang, 34, an ophthalmologist at Wuhan Central Hospital, became a national hero and a symbol of the Chinese government's systemic failings last month. Li had tried to warn his medical school classmates on Dec. 30 about the existence of a contagious new virus that resembled the deadly SARS.

Word began to spread in China thanks to Li, but his posts were censored and he was detained on Jan. 1 for "rumor-mongering."

The full outlines of his story, which came to light in recent weeks as the Wuhan outbreak exploded into an international emergency, set off a swell of outrage in China, where citizens have long chafed at the government's penchant for relentlessly snuffing out any speech deemed threatening to social stability.