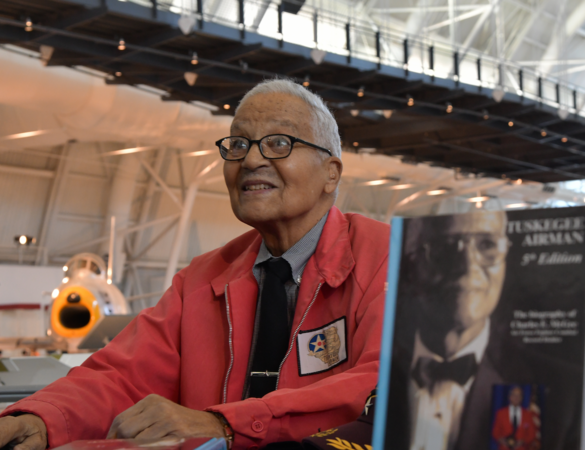 But, on Saturday morning at the Smithsonian's Steven F. Udvar-Hazy Center in Virginia, it was another number that most captivated Isaac Preston.

In his other hand, Isaac clutched a copy of "Tuskegee Airman," a biography of McGee that the man himself inscribed - in looping, turquoise cursive - with his name, the date and a message: "Seek excellence, Isaac!"

The boy's book was one of roughly 70 that McGee would sign before delivering an impromptu speech in the early afternoon, all part of the Smithsonian's annual African American Pioneers in Aviation and Space Family Day.

The free commemoration also featured a puppet show detailing the lives of African-American air and space adventurers, a display of African-American flight artifacts typically tucked away in National Air and Space Museum Archives and a panel discussion centered on careers in aviation and engineering. Elsewhere in the vast, airy Udvar-Hazy hangar, children could build colorful plastic planes or fashion rockets from straws and "Air-Dry Clay" before launching them, with much whooping and little guidance, in a museum corner.

Still - as evidenced by the line of grandparents, parents, teens, toddlers and babies massed beneath the yellow, baby blue and olive green aircraft that dangle from the Udvar-Hazy Center ceiling - the main attraction was indisputable.

"How are you doing in school?" McGee asked child after child, swallowing their small hands in his silken, wrinkled palms.

"School is so important," he added, before offering the same parting injunction: "You are the future, you know."

Leaning toward one little boy who wore his hair in braids, McGee whispered: "You could fly to Mars!"

The celebration was the latest in a string of high-profile events for McGee in recent weeks: Accompanied by three other centenarian World War II veterans, he opened Super Bowl LIV on Feb. 2 with a coin flip. On Tuesday, he sat in the audience for the State of the Union address, during which President Donald Trump dubbed him a "hero," inspiring a rare moment of sustained, bipartisan applause.

Earlier, Trump had approved McGee's honorary promotion from colonel to general, after Congress voted for the measure. The boost in rank capped a 30-year career in the Air Force that saw McGee become the first African-American to command a stateside Air Force wing and a base in the integrated Air Force.

His time with the Tuskegee Airmen was equally pathbreaking. The airmen, comprising more than 900 black pilots trained at the segregated Tuskegee airfield in Alabama, overcame racism and oppression to fly patrol, strafing and escort missions during World War II, the tails of their planes painted red.

Despite his crowded schedule, the only sign of fatigue McGee displayed Saturday was a half-finished cup of Dunkin' coffee, taken black, which he tucked behind a rapidly dwindling stack of his books. The general, his clothes and voice equally crisp, said during a break from signings that he felt well rested.

Adults in line, watching and waiting their turn, muttered a shared disbelief.

A balding, middle-aged man in a blue-and-white-striped polo shirt said he wanted to start eating whatever McGee does. Standing a few places away, a gray-haired man in a maroon quarter-zip said he and his wife were so shocked to learn that McGee would be signing books in person Saturday that she almost tackled him from excitement.

As they got close, most everyone in line began by thanking the general for his service.

One man slowly spelled the name of his military daughter, Anne. A woman spoke at length, in low tones, about her family members in the Air Force. Another man, who said he was a colonel, got down on his knees and confided that he had always wanted to fly, but he was too tall.

Isaac's mother, Shanna Preston, 36, saved her words until her son and her husband had already stepped away. She leaned over the table and mentioned the day that McGee was honored at the State of the Union: Feb. 4.

"That," she said with a glance toward her 9-year-old, "was his birthday."

McGee looked at Isaac, too, and nodded.

He pressed his palms together and pointed them at the boy, like a prayer.