Where to find the best vegan dining in Manhattan

On a glacially cold night in January, the packed brick-walled dining room at Délice & Sarrasin was warm and cozy. Parisian tunes, heavy on the accordion, played softly as a waiter delivered a steak tartare to a table beside mine.

Another server presented my friend and me with a cheese plate, pointing out bleu cheese, goat cheese with Moroccan spices, smoked Gouda, Gruyere. Beef bourguignon followed as a second course, and a whipped cream-topped, roasted pear and chocolate-almond crepe wrapped up the proceeding. It all had the air of tradition that Julia Child would have appreciated. Except for one thing. 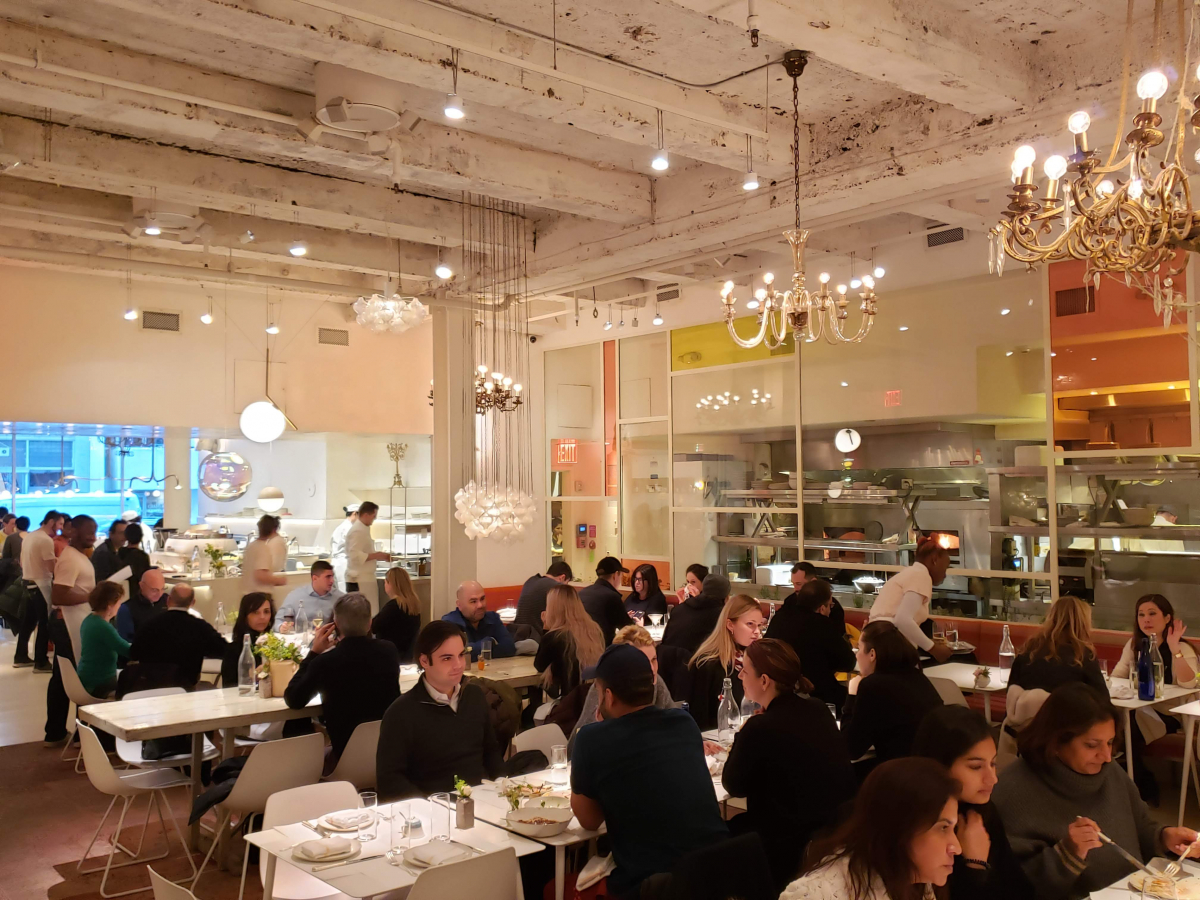 There was no meat or dairy products in any of the dishes. The cheese is made from cashews. The steak tartare is made from a yellow split-pea creation colored with beet juice and jazzed up with cornichon slices, shallots, capers, mustard. The foie gras (perhaps better dubbed faux gras) is a tahini and cashew formulation. That beef? The same split-pea invention cooked with the classic bourguignon medley of thyme, bay leaves and pinot noir. The crepe is topped with coconut cream.

I ate it with the same disorienting fascination one experiences when watching a convincing celebrity impersonator.

The kitchen at this West Village bistro is run by chef-owner Yvette Caron, who was a surgical oncologist in France when she started researching and discovering the health effects of plant-based diets on people suffering from anything from arthritis to cancer. She found relief from arthritis herself when she radically changed her diet, her son Christophe, who co-owns the place with his parents, told me. She became disenchanted with the medical industry and wanted to help people in a different way, he explained. Christophe, a model, had moved to New York in 2010 and, craving an authentic taste of home, opened a creperie. He later recruited his mother to join, and the concept turned into a full-blown French bistro with an entirely plant-based menu.

Vegan food has made its way into the zeitgeist at an exponentially fast pace in the past few years as health and environmental concerns become part of everyday conversation.

In 2019, the Agriculture Department released data showing a 47% decline in milk consumption since 1970, a figure that led to Dean Foods, the country's biggest milk producer, filing for bankruptcy in November. This comes on the tail (errr . . . stem?) of Impossible Burger and Beyond Meats, the two biggest players in the plant-based patty game, disrupting the fast-food industry. According to Barclays, the plant-based meat substitute category is expected to be worth $140 billion in the next decade.

Vegan cooking is making its mark on Manhattan, a place that's historically been identified with foods that are the opposite. (See: pastrami, pizza, hot dogs, and bagels with lox and a schmear.) And in typical New York style, it's being done with ferocious creativity.

In 2005, before any of this was au courant, Ronen Seri was simply looking for a restaurant that could support his vegan diet. The Israeli expat was studying acting in New York, and his restaurant quest continually came up empty. So he opened his own, Blossom, first in Chelsea in 2005 and then on the Upper West Side in 2007. In a comic twist, the latter is located a few storefronts up from a restaurant called the Viand, a nod to the French term for meat.

Ronen has a unique perspective, having watched his long-standing diet become more mainstream over time. "Years ago when we opened, you'd say 'vegan' and it was almost taboo," Ronen told me. "Now 'plant-based' sounds more exotic. Vegan was this old-school hippie Woodstock-y kind of thing. 'Plant-based' sounds more like Jay-Z."

I visited the casually elegant Upper West Side location on a blustery Sunday. It was bustling. My favorite part about exploring Manhattan's vegan fare is hearing restaurant staff describe each dish. Vegan cooking is an exercise in sleight of hand, in hoodwinking your senses in ways that bewilder carnivores like myself. Things are not always what they seem, vegan chefs want to remind. And so it goes at Blossom, where the salmon and scallop entree is made of beet-marinated, flame-grilled tofu surrounded by trumpet mushrooms that, by tricks of grilling and seasoning, become stand-ins for scallops.

Approximating steak, cheese, eggs and seafood is one approach to plant-based fare. The other is to simply take veggies, fruits and beans and put them front and center, like shining the spotlight on performers who've sung backup their whole lives.

"How often do you see a meal where butter beans are the main focus?" said the waiter at abcV as he delivered a plate of applewood-smoked butter beans that sat atop a butter bean puree accompanied by crispy maitake, a curlicue mushroom, fried capers and ginger-rosemary vinaigrette.

AbcV, two blocks from Union Square, is the plant-based entrant in uber-chef Jean-Georges Vongerichten's empire. (Unlike the other restaurants I tried, there are vegetarian dishes available here as well.) It's a vast space with high ceilings, rustic-chic touches and a kitchen behind glass where cooks maneuver as if playing a team sport. I sat at a counter that faces an open prep area where staffers peeled and mashed beets, laid out Technicolor radish slices on a tray, and prepared dairy-free desserts like chocolate layer cake and chocolate mousse parfait.

The executive chef here is Neal Harden, a youthful Maine native who moved to Bali to open a restaurant there and traveled extensively in Southeast Asian. The region's cooking customs inform his dishes today. He told me, for instance, that in much of Asia seitan is not used to impersonate meat; it's an ingredient in its own right. He marvelously demonstrates how that works with a dish featuring tempeh glazed with spicy kecap, a sweet-and-spicy Indonesian-style soy sauce with charred banana, black garlic and cilantro.

It's hardly unusual to find vegan food at a Manhattan restaurant, but what's interesting is the sheer diversity of dedicated vegan eateries. In Harlem I stopped by Uptown Veg, where plant-based versions of Caribbean- and Latin American-accented fare are sold by the pound. Owner and longtime vegan David Simmons, who was born in Guyana, opened it in 1993. During a recent Thursday lunch rush, a woman in a suit, a man in a bus-driver uniform, a mother with a toddler and a teenager sporting a Yankees jersey waited in line for plates piled high with jerk chicken, stuffed chile peppers, rib cutlets and lasagna layered with yucca-based cheese.

I tried a margherita-style pizza with just-tangy-enough cashew mozzarella at Double Zero, a polished East Village restaurant that's part of Matthew Kenney's empire. The Californian, a plant-based-dining evangelist, has businesses in more than 20 cities, including Sydney and Bogota. And I did a double take, figuring I must have been in the wrong place, when I walked into Jajaja Plantas Mexicana and witnessed a couple digging into a towering plate of nachos, doused in cheese. The plant-based destination on the Lower East Side is retrofitted into an old ice cream shop, its original gorgeous tile still mostly intact. (There are sibling locations in the West Village and Williamsburg in Brooklyn.)

And I sampled an assortment of small plates, each a clever display of fragrant Indian-influenced fusion fare, at Night Music. It's the latest project by Ravi DeRossi, the restaurant mogul who's made waves on the New York dining circuit with his efforts to turn his empire - or at least most of it - vegan.

Ravi has created a radically diverse suite of bars and restaurants. He oversees the tiki bar Mother of Pearl; the craft-beer bar Proletariat; Amor y Amargo, an intimate bitters- and amari-focused haunt with tiled surfaces that evoke Madrid; Ladybird, a Baroque-accented "vegetable bar," and more. A new addition to the collection is Honeybee's, an Old West-style saloon specializing in vegan barbecue and American whiskey and named for his pit bull-greyhound mix. But perhaps the crowning jewel of the kingdom is Avant Garden, an upscale farmhouse-chic sanctuary with an open kitchen and imaginative plant-based menu.

Drew Brady, the general manager, described dishes in language that's equal parts technical and whimsical. And intriguing entree that appeared to be noodles was spiralized celery root with a thick mushroom reduction that gets creamy when the vegetable moisture hits high heat. A carbonara dish gets its pancetta-like note from the mix of charred spring onion and smoked white onion.

And there was my guarantee that I'll never think about vegetables the same way again.

Part of the Jean-Georges Vongerichten empire, this spacious restaurant, a study in muted glamour, is sibling to ABC Kitchen, the neighboring eatery, both located in the home store of the same name. Many of Chef Neal Harden's vegetable-forward dishes nod to Southeast Asian flavors and techniques and showcase produce from local farmers. Open daily for breakfast, lunch and dinner; hours vary. Entrees from $17.

Nearly every dish is a surprise at this upscale farmhouse-chic plant-based spot in the East Village, part of a suite of hip, stylish and plant-based bars and eateries by New York restaurant magnate Ravi DeRossi. Senses do double takes at dishes that will mystify committed carnivores. Open daily 5 to 10 p.m. Entrees from $18.

Since 2005, before Impossible Burger was a twinkle in a vegan's eye, Blossom was making imaginative use of plant-based ingredients to create wholesome and intriguing dishes like jackfruit tacos, seitan piccata and rigatoni. Founder Ronen Seri runs two outposts - one on the Upper West Side and one in Chelsea - and co-authored a vegan cookbook in 2017. Open for lunch Monday to Saturday 11:30 a.m. to 3:30 p.m.; Sunday 10:30 a.m. to 3:30 p.m. Dinner nightly 5 to 9:45 p.m. Lunch entrees from $16 and dinner from $17.

Beef bourguignon, coq au vin, foie gras, escargot and all the other French standards are inventively prepared without any of the keystone meat or dairy ingredients at this cozy, elegant, family-owned West Village bistro, run by a former oncological surgeon. Open daily 10 a.m. to 11 p.m. First course from $9; entrees from $15.

Hearts of palm take the starring role in ceviche, hempseed- and flaxseed-battered chayote squash stands in for fish in a taco, and plant-based sausage and chorizo give Mexican staples their familiar smoky flavor at this trio of modern Mexican restaurants with locations in the West Village, Lower East Side and Williamsburg in Brooklyn. The Manhattan locales feature tequila- and mezcal-centric bars. Open Sunday to Wednesday 11 a.m. to midnight and Thursday to Saturday 11 a.m. to 1 a.m. Tacos from $8 and entrees from $12.

Vegan food comes by the pound ($7.99 to $8.99 per pound) at this cafeteria-style Harlem restaurant. Choose from sweet-and-sour seitan, meatballs, vegetable curries, lasagna, jerk chicken and other plant-based selections, many of which nod to Caribbean classics. Fresh juices are on offer. Owner David Simmons also makes Kamuni Creek, a line of bottled drinks made with fruit pulp imported from the Caribbean. Open Monday through Friday 8 a.m. to 9 p.m.; Saturday 10 a.m. to 8 p.m. and Sunday 10 a.m. to 7 p.m.

By : Special To The Washington Post · Liza Weisstuch · FEATURES, TRAVEL

Phuket counts down to arrival of foreign tourists on July 1