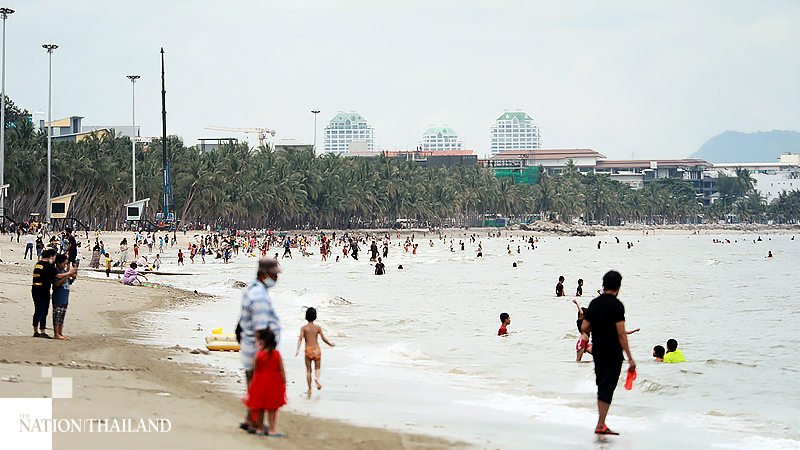 Locals flock to the beaches in Chonburi province to the East of Bangkok as the government eases lockdown restrictions, though the country remains closed to foreigners for fear of a second wave of infections.

Siam Commercial Bank’s Economic Intelligence Centre (EIC) has further revised downward its economic projection for this year, and predicted that the baht will reverse its course and weaken in the Covid-19 fallout.

Yunyong Thaicharoen, first executive vice president of EIC, said on Friday (June 5) that the centre has revised its projection to an economic contraction of 7.3 per cent this year from its previous forecast of 5.6 per cent. He added that the Covid-19 pandemic and resulting business shutdowns have impacted the economy more severely than expected.

Tourist arrivals are expected to shrink by 75 per cent or drop to 9.8 million this year from close to 40 million last year, while the value of export in dollar terms is forecast to contract by 10.4 per cent year on year.

However, the economy is expected to bottom out in the second quarter, shrinking 12 per cent, and though contraction will continue in the third and fourth quarters it will be at a slower rate.

Businesses and households may find it tougher to repay their debts, while unemployment may hit the 3 million to 5 million mark.

The research house believes the Bank of Thailand will maintain its key policy rate at 0.5 per cent for the entire year after a recent rate cut by 25 basis points.

The baht is expected to weaken as more and more businesses resume operations after having closed temporarily for three months. The currency is expected to fluctuate between Bt31.5 and Bt32 per dollar. The current account will return to surplus at 2.4 per cent of the GDP after it hit a deficit in April, EIC said.

The centre’s assessment is similar to that of the central bank, which said recently that it was worried about currency appreciation. A strong baht may derail recovery from the crisis. The central bank has also warned that the current account surplus this year will be smaller than last year, and that the baht may reverse its course.