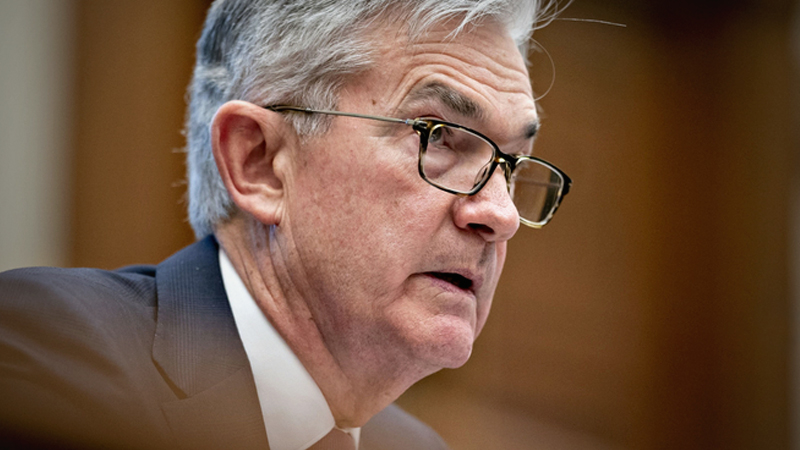 WASHINGTON - Federal Reserve leaders predict a slow recovery for the U.S. economy, with unemployment falling to 9.3 percent by the end of this year and to 6.5 percent by the end of 2021, after tens of millions of Americans lost their jobs in the stunning recession caused by the outbreak of the novel coronavirus.

Fed Chair Jerome Powell stressed Wednesday that more aid from Congress and the central bank is likely to be needed, especially since a substantial number of Americans may never get their jobs back.

"Unemployment remains historically high," Powell said during a news conference Wednesday. "My assumption is there will be a significant chunk ... well into the millions of people, who don't get to go back to their old job ... and there may not be a job in that industry for them for some time."

To revive the economy from the deepest recession since the Great Depression, the Fed pledged to keep interest rates at zero, most likely through 2022, and to continue its extensive bond-buying programs at the current pace for the foreseeable future. The Fed's historic efforts, which could swell its balance sheet to $10 trillion by year's end, are also fueling deeper inequality in the United States, many economists say.

Low interest rates make it cheap to get a loan for a car, mortgage or business operation, but people generally need to have savings and a stable job to get access to credit. The cheap rates have also fueled incredible stock market gains. The Fed has limited tools to use in emergency situations such as this and they tend to buoy Wall Street far more than Main Street.

"The Fed's response has deepened wealth inequality. They've produced an incredible recovery in asset prices and most of these assets are owned by the rich and the white segment of the population," said Mohamed El-Erian, chief economic adviser at Allianz. "All they can say is the alternative would have been worse."

Lower interest rates have triggered one of the swiftest rebounds in stock market history and made it cheaper for Americans to borrow money to buy homes or take out a business loan.

Mortgage rates fell to an all-time low at the end of May, causing a surge in home-buying, even during the pandemic. But Americans need to have substantial savings to be able to invest in the market or purchase a home.

The Fed's own data shows only about half of Americans have any money invested in the stock market, and nearly 40 percent of households do not have enough cash on hand or in a bank account to cover an emergency $400 expense, leaving them especially vulnerable if they lose their job or have their hours cut.

Numerous lawmakers from both parties have also expressed disappointment that the Fed has still not been able to get its so-called Main Street Lending program aimed at small and midsized companies up and running after two months.

Powell defended the Fed's actions, arguing that the central bank's swift intervention helped prevent the health and economic crisis from turning into a financial panic that would have cost more jobs and caused far more bankruptcies. But he said the Fed's tools are blunt and Congress would likely have to play the bigger role in helping specific people and companies hardest hit by the crisis.

"Many borrowers will benefit from these [Fed] programs, as will the overall economy," Powell said, but he noted there will limits to what the central bank can do. "Direct fiscal support may be needed. Elected officials have the power to tax and spend and to make decisions about where we, as a society, should direct our collective resources."

Powell stopped short of recommending any specific actions by Congress. Economists across the political spectrum have called for federal aid to cash-strapped state and local governments that have already cut over half a million jobs as they try to balance their budgets as they deal with the coronavirus and widespread protests.

But many economists are also concerned that enhanced aid for the unemployed, including an extra $600 a week in unemployment benefits, expires at the end of July, when jobs are still likely to be scarce. How to help these people left out of the rebound remains contentious in Congress. The same is true of what to do for restaurants, movie theaters and other businesses that still can't fully reopen.

Low-wage black and Hispanic women have been especially hard hit by job loss during the pandemic. This population had some of the lowest savings heading into the crisis.

"The low end of the income spectrum really needs a Marshall Plan from the government," said Sung Won Sohn, president of SS Economics. "The U.S. government done good job so far of preventing the economy form going into a depression, but going forward, we need to have a balance between economic growth and income distribution."

In an ironic twist, the Fed's actions might actually make it harder to rally support in Congress for more aid, especially among Republicans who have pointed to the stock market rebound as a sign optimism is back.

Shortly before Powell spoke, Treasury Secretary Steven Mnuchin was testifying on Capitol Hill where Republican lawmakers grilled him about whether more stimulus is necessary given that the economy is reopening, stock markets are back near record levels and there are signs of a pickup in flights, hotel stays, restaurant reservations and other activity.

"There is still significant damage in parts of the economy," Mnuchin said, echoing Powell. "We're going to consider using all of our fiscal tools, working with Congress to make sure that we restore this economy back to where it was and where it should be, and to make sure that the many Americans that still don't have jobs get back their jobs."

But Sen. Mitt Romney, R-Utah, captured the sentiment of many in the GOP caucus when he told Mnuchin, "I'm puzzled by the statement that you make that we're going to need a stimulus to get the economy going again."

Powell and Mnuchin have worked closely together since mid-March as the scope of the economic crisis became clear. Together, they are responsible for dispersing about $500 billion in aid to U.S. companies, of which only a fraction has been spent so far. A significant amount of remaining money is intended for the Main Street Lending program, which Powell said is in the "final run up" to launching soon.

The Fed's forecasts released Wednesday were noticeably rosier than many others, including from the Congressional Budget Office, which predicts unemployment will remain above 11 percent at the end of this year and will only fall to 9.3 percent by the end of 2021.

The central bank is anticipating a solid turnaround to take hold later this year and build in 2021. Fed leaders each make their own forecasts for the economy's path, but the median estimate is for the economy to shrink this year by 6.5 percent and then grow by 5 percent in 2021.

But a partial rebound does not mean the economy will be back to where it was anytime soon.

"By the end of 2021, the loss of income exceeds that of any previous recession over the last 100 years outside wartime, with dire and long-lasting consequences for people, firms and governments," warned Laurence Boone, chief economist at the Organization for Economic Co-operation and Development in a report issued Wednesday.

Powell and Mnuchin tried to walk a fine line of applauding the encouraging signs that some consumer and business spending is picking up again, but reminding the public and other policymakers that the United States remains far from where it was in February, when unemployment was at a half-century low and optimism among consumers was at the highest since the late 1990s.

"It is clear that the Fed does not anticipate a V-shaped economic recovery and is positioned to move forcefully to support the economy if there is an error in trade or fiscal policy," said Joseph Brusuelas, chief economist at RSM, in a note to clients.

Stocks initially rallied on the Fed news that interest rates would remain at historic lows for years, but the gains for the broader market evaporated as Powell said he was in "risk management" mode, presenting a cautious view of how many hurdles remain for a widespread recovery.

The tech-heavy Nasdaq index hit a record this week, and the S&P 500 erased all its losses for the year. But some are concerned the Fed is fueling a stock market bubble, yet another challenge.

Powell has made it clear he prefers to err on the side of caution to ensure the economy improves instead of sliding backward in the coming months.