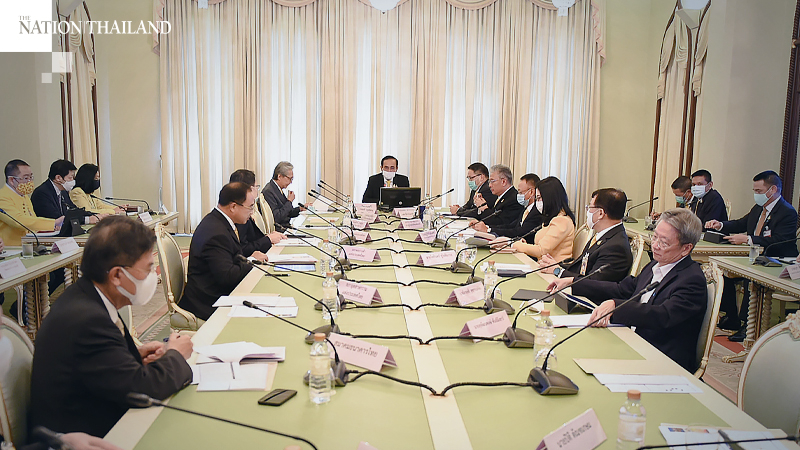 Prime Minister Prayut Chan-o-cha on Friday meets with his economic advisers, business leaders and some ministers to discuss extra measures to support small businesses and people adversely affected by the Covid-19 pandemic.

Prime Minister Prayut Chan-o-cha has changed the way he manages the economy by increasing collaboration with his economic advisers and business leaders.

Prayut postponed today's meeting of the Council of Economic Ministers and instead held a meeting with his advisers, economic ministers and business leaders to discuss remedial and recovery plans after the Covid-19 outbreak.

Somkid downplayed the postponement of the economic ministers meeting, saying that economic management would run smoothly as he knows both the PM's advisers and business leaders very well.

“It is better for the PM to have all the information, including from outsiders, before making a decision on economic measures,” said Somkid.

“PM Prayut is interested in how to support small and medium-sized enterprises and we have already talked with the Finance Ministry about measures to support SMEs, which will be submitted for Cabinet approval once the PM agrees,” said Somkid. He added that the Finance Ministry cannot solve many problems on its own and needed cooperation from other ministries run by different parties in the coalition, such as the Agriculture, Commerce and Labour ministries. The PM, as leader of the economic team, was in a good position to secure that cooperation "because coalition government needs to move together”, added Somkid.

Kobsak Pootrakool, secretary of the Council of Economic Ministers and the PM's deputy secretary-general on political affairs, said the prime minister has changed the way he works under the "new normal" by listening more to his economic advisers. Previously, Prayut was merely updated by senior officials and talked with ministers.

Kobsak said the PM's economic advisers and business leaders have proposed establishing a centre for economy recovery from the Covid-19 pandemic, similar to the government’s Centre for Covid-19 Situation Administration (CCSA) which has won success in containing the outbreak.

Meanwhile Paiboon Narintarangkul, chairman of the Federation of Thai Capital market Organisations, urged the government to make Thailand the hub for regional finance and capital markets. Others have proposed legal reform in order to make doing business in Thailand much easier.

The meeting came a day after the four ministers credited with running Thailand's economy resigned from the ruling Palang Pracharat Party, though kept their seats in Cabinet. Prayut announced on Thursday he would reshuffle the Cabinet after talks with coalition parties. Prayut’s economic management has failed to impress observers since Thailand's economy is currently the worst performer among Asean countries.